Trump Says Supreme Court Nominee Will Be a Woman

President says he expects to announce a pick next week, predicting process will go quickly

WASHINGTON—President Trump said Saturday that he will nominate a new Supreme Court justice to replace Ruth Bader Ginsburg next week and that his selection will be a woman.

Mr. Trump made the declaration during a rally in North Carolina. He has promised a speedy process and earlier in the day called on Republicans to move urgently, saying on Twitter that filling the seat is an obligation they must consider without delay.

In North Carolina he said: “I will put forward a nominee next week. It will be a woman.” He had previously told reporters he was likely to pick a woman.

As mourners gathered at the Supreme Court after Justice Ginsburg’s death, Mr. Trump made clear he was ready to move forward with a contentious nomination fight during the last weeks of the presidential election. The president used plans for a nomination to rally his base Saturday night, defending his right to put forth a replacement as the crowd chanted “fill the seat” and then polling the audience on whether they wanted a woman or a man on the court.

“It will be a woman, a very talented, a very brilliant woman,” Mr. Trump said. “Who I haven’t chosen yet, but we have numerous women on the list.”

His comments followed a commitment from Senate Majority Leader Mitch McConnell (R., Ky.) that he would seek to confirm the president’s nominee, though he didn’t say if he would seek to do so before Election Day, Nov. 3.

Mr. Trump is already facing some pushback from within his party, which holds a 53-47 majority in the Senate. Sen. Susan Collins of Maine said Saturday that the winner of this fall’s presidential election should choose the next nominee and that the Senate shouldn’t vote before then. The president took issue with Ms. Collins’s statement, as he spoke to reporters outside the White House before the rally, saying that he “totally” disagrees.

“Right now we’re here and we have an obligation to the voters, all of the people, the millions of people, that put us here,” he said.

Senate Minority Leader Chuck Schumer (D., N.Y.) signaled on a call Saturday afternoon that Democrats could retaliate next year if they took control of the chamber, according to a person on the call.

Justice Ginsburg died Friday at her Washington home, succumbing to metastatic pancreatic cancer at the age of 87, the Supreme Court said. A pioneer for women’s rights, she was a central member of the liberal minority of the court, on which conservatives long held a 5-4 advantage.

Her death leaves the court with eight members just weeks before it starts its new term and threatens to disrupt the already turbulent presidential race. Mr. Trump’s efforts could rally his base as well as shifting focus from the coronavirus pandemic. Democratic nominee Joe Biden has said the nomination should wait until the next presidential term.

Supreme Court vacancies during an election year since 1900

The president spoke to Mr. McConnell on Friday night, said a person familiar with the call, and indicated that his preferences for the nomination included federal appellate judges Amy Coney Barrett of the Seventh Circuit, in Chicago, who has impressed White House officials, and Barbara Lagoa of the 11th Circuit, in Atlanta. Another person close to the process indicated those were leading contenders.

The Biden campaign said the former vice president isn’t planning to put out a list of potential nominees, in contrast with Mr. Trump, who has issued lists of prospective Supreme Court picks since his 2016 campaign.

An aide to Mr. Biden added that he supported Justices Ginsburg, Elena Kagan and Sonia Sotomayor and opposed the nominations of Robert Bork and Justice Clarence Thomas, saying, “That tells you a lot about what kinds of judges he would put forward for the Court.”

It wasn’t immediately clear how quickly the Senate could schedule confirmation proceedings and whether Mr. McConnell has a unified GOP caucus for filling the vacancy right away. Mr. McConnell can lose no more than three Republicans, with Vice President Mike Pence able to cast a tiebreaking vote.

Ms. Collins said Saturday in a statement: “In fairness to the American people, who will either be re-electing the President or selecting a new one, the decision on a lifetime appointment to the Supreme Court should be made by the President who is elected on November 3rd.” She indicated, however, that she wouldn’t object to the Judiciary Committee beginning its consideration of Mr. Trump’s nominee.

Sen. Lisa Murkowski (R., Alaska) had said previously she didn’t support filling the vacancy this year, but hadn’t commented on the nomination process since Justice Ginsburg’s death was announced.

The Senate had been expected to adjourn for the month of October to let lawmakers spend the final weeks before the election campaigning at home.

Democrats argued that Republicans were violating the standard they set in 2016, when they denied a hearing to President Obama’s nominee, Merrick Garland. Senate Judiciary Committee Chairman Lindsey Graham (R., S.C.), who would preside over a confirmation hearing, said Saturday he was willing to proceed.

“I will support President Trump in any effort to move forward regarding the recent vacancy created by the passing of Justice Ginsburg,” Mr. Graham said in a tweet Saturday.

His comments ended some speculation that Mr. Graham might balk at moving forward, since he had earlier suggested that he would hold a vacancy open in the last year of President Trump’s term.

Mr. Schumer made clear Saturday that major changes could be in store if Democrats regain control of the Senate after the November election.

“If Leader McConnell and Senate Republicans move forward with this, then nothing is off the table for next year,” he said, according to someone on the call.

Democrats have been considering changes to Senate rules that would allow them to confirm legislation with a simple majority, rather than the 60 votes most bills currently need, crippling Republicans if they lose the chamber. Democrats have also discussed expanding the number of justices on the Supreme Court to counteract what they view as illegitimate tactics by the GOP to make it more conservative.

House Judiciary Committee Chairman Jerrold Nadler (D., N.Y.) said Saturday that if Republicans confirm a nominee during the lame-duck session after the election, then “the incoming Senate should immediately move to expand the Supreme Court.”

A political battle over who will fill Justice Ginsburg’s seat is certain to shape the final act of the contest between Messrs. Trump and Biden.

A shift in the Supreme Court could have major implications for issues that affect millions of Americans, including abortion, health care and the role of religion in public life. While justices across the ideological spectrum find common ground in many of the court’s cases, they tend to split into ideological camps on some of the nation’s most hot-button issues because they view disputed areas of the law differently. The loss of Justice Ginsburg leaves the court’s liberal minority weakened and potentially changes the dynamics of high-stakes cases that are pending on the court’s docket, as well as others that could arrive soon.

One of the court’s biggest pending cases, set for argument the week after the election, involves the future of the Affordable Care Act, the Obama-era health law. The high court preserved the ACA in rulings in 2012 and 2015, but the law has faced a new legal attack from a group of Republican-led states, at a time when health care is again a top political issue.

The justices have also faced a flurry of emergency litigation over 2020 voting rules, which have created novel legal issues because of the coronavirus pandemic. These cases have at times split the court along ideological lines, and many court watchers expect the court to face additional cases as Election Day approaches.

Mr. McConnell now faces a series of high-stakes decisions around the timing and strategy of how to proceed with the nomination process.

Senate Republicans up for re-election this fall in battleground states will have to decide whether to side with Mr. McConnell and President Trump and potentially risk losing the support of swing voters, or buck GOP leadership and risk enraging the Republican base.

Senate Republicans changed the chamber’s rules in 2017 to confirm Supreme Court justices with a simple majority. Mr. McConnell’s decisions on when to hold confirmation hearings and when to schedule a vote will affect the position vulnerable Senate Republicans have to take—and defend to voters.

Shortly before her death, Justice Ginsburg said her “most fervent wish is that I will not be replaced until a new president is installed,” according to her granddaughter, Clara Spera. 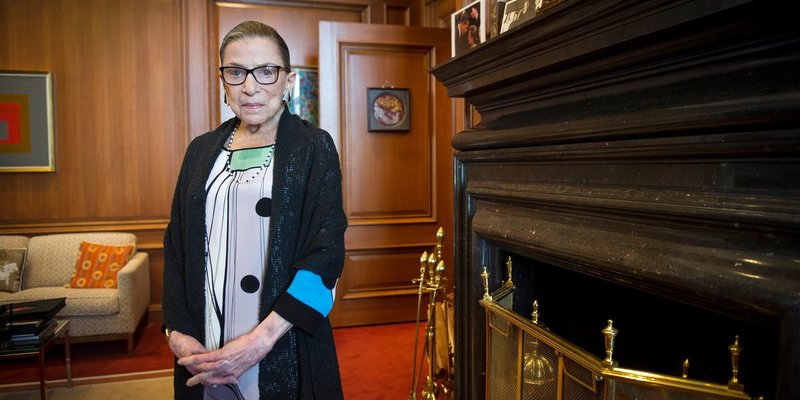 Trump Says Supreme Court Nominee Will Be a Woman

SSG Dennis Reap
Posted 2 y ago
Drumpf gonna nominate a woman?
OK ... she'll be about as female as Clarence Thomas is black.
(1)
Comment
(0)
Read This Next
RallyPoint Home