SFC (Join to see)
13.3K
53
19
16
16
0
Washington (CNN) — Within hours of taking the oath of office, President Donald Trump on Friday night signed an executive order aimed at trying to fulfill one of his most impassioned campaign promises: Rolling back Obamacare.

The multi-part executive order stated that the administration's official policy is "to seek the prompt repeal" of the Affordable Care Act -- but at the same time emphasized that his administration must continue to uphold the law.

With his signature, Trump sent a powerful signal on Day One of his presidency: His top priority in the Oval Office will be dismantling the health care law that covers some 20 million Americans.

The signing of the order also highlighted how deeply divisive Obamacare remains seven years after its inception: passing a health care reform bill was one of President Barack Obama's first priorities when he took office in 2009; overhauling it is now an urgent mission of Obama's successor.

The also directs the secretary of health and human services and the heads of other agencies to use their discretion to help individuals, healthcare providers, insurers and others avoid any burdens stemming from the Affordable Care Act.

"He has been told that he needs to comply with the law," said Timothy Jost, an emeritus professor at Washington and Lee University School of Law, "but is directing the agencies to begin taking steps towards reducing regulatory requirements and giving more discretion to the states."

The order also looks to give states more flexibility and control over their health care markets, in keeping with longstanding Republican beliefs.

White House Chief of Staff Reince Priebus also sent out a memo to all government agencies and departments calling for a regulatory freeze,.


Signal on Day One

Republicans have been railing against the health care law for years, using "repeal and replace Obamacare" as a political rallying cry to gin up support within the GOP base. During the presidential campaign, Trump promised his supporters that as president, he would do away with the law and that his alternative would be "something terrific."

But Republican lawmakers are quickly learning how difficult it will be to overhaul the law.

Initially, GOP leaders signaled that they would move forward with a vote to repeal major portions of Obamacare but delay the repeal from going into effect for a few years to give the party time to craft a replacement plan.

But that "repeal and delay" strategy drew almost immediate pushback. Rank-and-file Republicans grew nervous that the uncertainty created by the lack of a replacement would spark chaos in the insurance market -- and leave the party holding the blame for millions of Americans who might confront either disrupted or halt in coverage.

Trump has been adamant that "repeal and replace" must happen more or less simultaneously -- a stance that GOP leaders on the Hill have since adopted.

And according to Hill sources, senior Republicans are exploring multiple avenues through which to replace what gets rolled back, including measures tucked into the repeal bill, executive orders as well as administrative actions taken by Trump's nominee for Health and Human Services secretary, Tom Price.

Priebus issued a memorandum to all executive departments and agencies to freeze new or pending regulations -- giving the new administration time to review them.

The action is a fairly standard move for a new administration taking over for the other party. It effectively halts any lingering policies from the Obama administration before they can be finalized.

The move also gives Trump the ability to declare an immediate impact on the regulations that Republicans have long slammed as burdensome on businesses — a major promise of his administration.

Still, to roll back any number of the regulations that were finalized in the eight years that Obama was president, Trump will need an act of Congress or will need his agencies to begin the regulatory process from scratch.

Federal regulations go through a multi-step process in order to take full effect. The President cannot halt any regulations that have gone into effect already, but lays out steps for any that are not fully in action.

For those that have been sent but not published, the White House ordered the regulations withdrawn.

There are regulations have been published but have not reached their effective date. The memo instructs those regulations to be delayed for 60 days for review -- with a potential that a new notice for reopening the regulation could occur.

The memo makes an exception for "critical health, safety, financial, or national security matters," and asks agencies to identify any regulations that can't be delayed for other reasons. 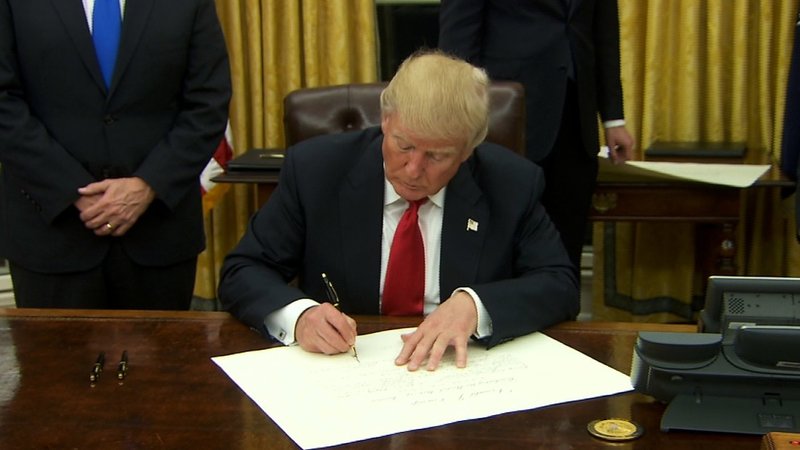 SPC Erich Guenther
Edited 4 y ago
Posted 4 y ago
Good news, continue to erase the outright crap of the last eight years that was rammed through without any consultation of the minority party. It's what happens when you don't compromise. Abraham Lincoln knew this well. Bipartisanship ensures that controversial laws stay in place after you leave office......you would think a guy that was attempting to be like Lincoln would have picked up on it in Lincoln's legislative history.
(7)
Comment
(0)
show previous comments

SPC Erich Guenther
4 y
The difference of course is that President Trump has the money, power and influence as well as the votes to hammer the Democratic Party pretty good if they try to obstruct. Not to mention the intellect to make them look really stupid in public by executing on what he promised.
(1)
Reply
(0)

SPC Erich Guenther
4 y
SP5 Christine Conley - It's always interesting to hear what the other side would do. No, I think he would contribute to the competing campaigns.
(0)
Reply
(0)

Capt Jeff S.
>1 y
The only thing Obama did like Lincoln was shred the Constitution.
(0)
Reply
(0)

Capt Jeff S.
>1 y
SPC Erich Guenther Trump doesn't have to worry about making them look stupid; they have more than enough stupid people making sure they get lots of attention. Strange how the Democrats who railed against Dan Quayle unmercifully because he misspelled Potato... and Sarah Palin whom they despised for her pretty appearance and called an airhead NOW have no comment when it comes to their own folks like the new face of the DNC, Socialist Alexandra Occasio Cortez who doesn't even know what the three branches of the federal government are, making threats against her own party members if they don't help her oppose everything Trump attempts to accomplish (in so many words). Hypocrisy much?!!
(0)
Reply
(0)

SFC George Smith
Posted 4 y ago
Most interesting... and I look forward to seeing how things Unfold from Here...
(6)
Comment
(0)