Sgt. Carl Baker answered the phone while on staff duty at Joint Base Eustis two weekends ago and was troubled by the tone of the voice on the other end.

He had heard that tone once before.

Baker locked up. He couldn't speak. He thought about the heartache a month earlier when he took a similar call and learned that another soldier from his company, Staff Sgt. Justin Johnson, had been killed while in Afghanistan - a deployment that Baker was supposed to have been on.

And now two more soldiers from the 359th Transportation Company were coming home in flag-draped caskets. Baker hung up the phone before he could even learn the most basic details: Two soldiers he knew well, Spc. Caryn E. Nouv and Sgt. Eric T. Lawson, had been killed during a roadside attack in Ghazni province.

Nouv and Lawson's names echoed through the base chapel Tuesday at the end of a somber memorial service - the second in as many months. In one last roll call for the fallen soldiers, sobs and sniffles replaced the sounds of their voices. Baker, among more than 200 soldiers and family members, wiped tears from his face.

The 24-year-old soldier had deployed with the close-knit company - part of the 7th Sustainment Brigade's 10th Transportation Battalion - nearly nine months ago, but he was forced to return to Joint Base Eustis early for reasons he didn't wish to discuss Tuesday.

The 359th has been serving as a convoy escort team - a dangerous job that often takes the soldiers outside the safety of the base.

Baker recalled playing pickup basketball early on in the deployment with Lawson - who was so competitive, he once challenged fellow soldiers to a baking contest when someone claimed to be able to make a better sweet potato pie. He was as motivational as he was competitive, Baker said.
"He just knew the words to say. It was amazing."

Lawson, 30, leaves behind his wife, a son and a stepdaughter.

Nouv, a 29-year-old Yorktown native who graduated from Tabb High School, lived in the barracks next to Baker during the few months he spent on deployment. Baker said the mother of two young children talked often about her family and had a way of lightening the mood.

"She was older than me, but she reminded me of someone younger," Baker said. She giggled often, he said, and it was contagious.

Nouv and Lawson were promoted posthumously to sergeant and staff sergeant, respectfully.

The three deaths mark one of the deadliest stretches for Joint Base Eustis during the past decade of war. The strained unit is expected to return to Newport News in September.

Baker will be waiting to greet them.

"It's very hard to wake up knowing that they are still there and I'm here," he said, acknowledging that it could just as easily have been his photo on display in the chapel, his family members dressed in black, bracing themselves on wooden church pews as they wept. "God had a plan for those two, and he had a plan for me, too. All I can do is make my time worth it here." 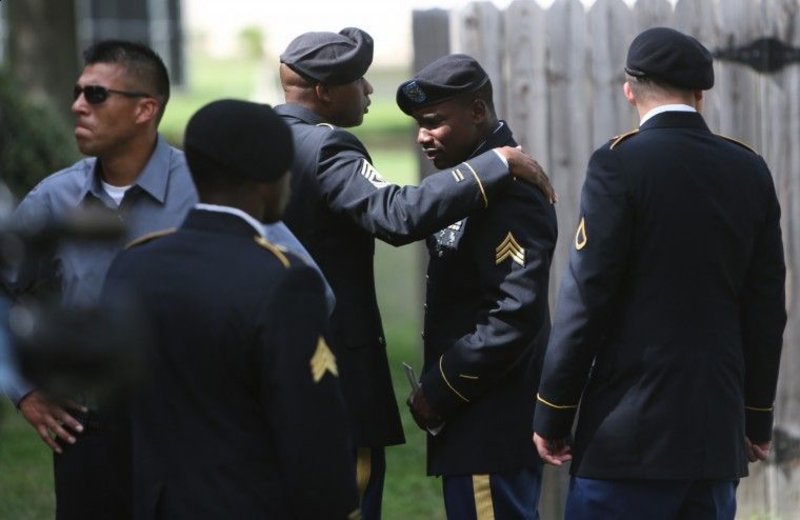 Posted from pilotonline.com
Posted in these groups:

LTC Stephen F.
Edited 5 y ago
Posted 5 y ago
Thanks for sharing your local but sad news SFC (Join to see) the 1SG remembers all too well SGT Eric. T Lawson who died in Afghanistan in July 2013. It is bittersweet that two Fort Eustis based soldiers Spc. Caryn E. Nouv and Sgt. Eric T. Lawson, had been killed during a roadside attack in Ghazni province. It is bitter that they were killed so recently and sweet that they were honored.
(4)
Comment
(0)