Posted from thedrive.com
Posted in these groups: 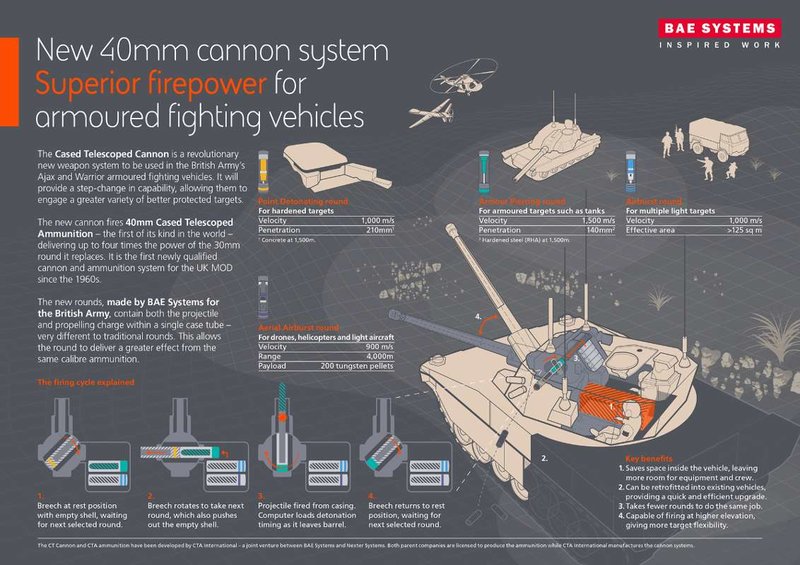 March 21, 2018, BAE Systems demonstrated CTAI’s 40mm Cased Telescoped Cannon to Army officials at Fort Benning, Georgia, which is the home to the service’s Infantry and Armor schools. Company representatives and service members fired a total of 80 rounds and the weapon experienced no malfunctions. CTAI, which has its base of operations in France, is a 50-50 joint venture between U.K.-headquartered BAE Systems and the French Nexter Systems.
CTAI has been working on the system since 1994 and has successfully demonstrated it in a variety of configurations. The United Kingdom and France have selected the weapon as the main armament for their upcoming Ajax and EBRC Jaguar armored vehicles, respectively.
It’s an advanced and innovative design overall, but its primary benefits are in the basic size and construction of the 40mm cased telescoped ammunition. A cased telescoped round means that the actual projectile sits inside the cartridge case with the propellant instead of protruding from the front.
As a result, the 40mm cased telescoped cartridges are roughly half the length of other 40mm rounds on the market and are even shorter than the 30mm rounds for the XM813 Bushmaster II gun the Army is testing on its up-gunned Strykers, also known as Dragoons. The beer-can shaped ammunition is wider overall, though. This makes them easier to handle and store within the generally cramped confines of an armored vehicle.
FYI COL Mikel J. Burroughs LTC Stephen C. LTC Orlando Illi LTC (Join to see) LTC (Join to see) Maj Bill Smith, Ph.D. Capt Seid Waddell Capt Jeff S. CPT Jack Durish MSG Dan Walther MSgt Robert "Rock" Aldi SFC Stephen King MSgt Danny Hope SGT Gregory Lawritson Cpl Craig Marton SP5 Mark Kuzinski SGT (Join to see) Maj Marty Hogan
(5)
Comment
(0)