A federal appeals court on Monday tossed out a veteran's conviction for wearing military medals he didn't earn, saying it was a form of free speech protected by the Constitution.

Elven Joe Swisher of Idaho was convicted in 2007 of violating the Stolen Valor Act, which made it a misdemeanor to falsely claim military accomplishments. President George W. Bush signed it into law in 2006, but the U.S. Supreme Court struck it down in 2012 as a violation of free speech protections. 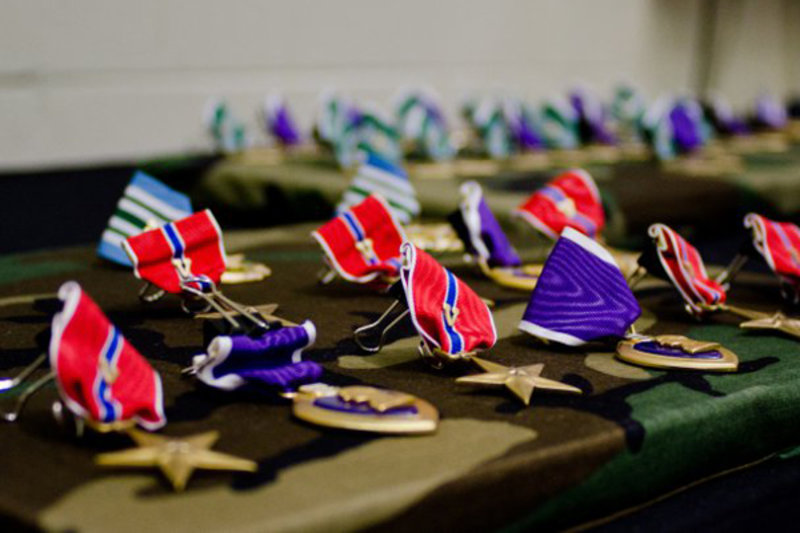 Prince McNeil
Posted 5 y ago
How would they like it if I put on a judges robe and walked around the Federal Court house?!!! I didn't earn my college degree, didn't go to law school and didn't work the trenches in courts as a lawyer to become qualified and elected as a judge!!! Hypocritical judgement on their behalf!!!
(34)
Comment
(0)
show previous comments

CPT Pedro Meza
5 y
You are making an assumption that has to be proven to seek what the out come, otherwise it is just an assumption; hypothesis.
(1)
Reply
(0)

CPT Pedro Meza
5 y
LTC (Join to see) - The same applies in communist china were you have no rights to free speech with out a price.
(1)
Reply
(0)

MSgt Michael Smith
5 y
They wouldn't like it, but that doesn't mean they could stop you. That is the point here. Freedom of expression is not about hurt feelings, it is about the right to hurt feelings.
(1)
Reply
(0)

SFC Michael Peterson
5 y
That is a perfect analogy. Better yet, what if I wore a badge? Oh yeah, that's not "free speech". That's impersonating a police officer.
(3)
Reply
(0)

MSgt Steven Holt
Posted 5 y ago
I'm willing to bet not one of those judges ever served in the military. I don't think they understand just how significant some of those awards/medals/decorations can be.
(22)
Comment
(0)
show previous comments

LTC (Join to see)
5 y
MSgt Steven Holt - I agree, it does denigrate and devalue, but if we criminalize all language in the US that somebody thinks devalues something, then we won't have much legal we can say to each other.

I don't understand how service members who fought for freedom can be so against others saying what they want. Yes it's disgusting, but that's what free speech protects. What separates us from tyrants is that we don't criminalize expression of others when we don't like it.
(3)
Reply
(0)

CPT Pedro Meza
5 y
I do not worry about stolen valor, I was affected by denied valor, I waited for four months for an appointment and begged for meds in order to make my TBI mind sleep, lack of sleep is the worst thing for TBI and PTSD.
(0)
Reply
(0)

CPT Pedro Meza
5 y
LTC (Join to see) - Service members of WWI, WWII, Korea, and Vietnam that I have known never complained like these new ones is that they feel Entitled or that they bought into the phrase by politician seeking votes!
(0)
Reply
(0)

SGT (Join to see)
>1 y
MSgt Steven Holt You wrote, “I'm willing to bet not one of those judges ever served in the military. I don't think they understand just how significant some of those awards/medals/decorations can be.” Respectfully, I will take that bet.

Proctor R. Hug, who retired in Nov 2017 after 30 years on the 9th circuit (active at the time of ruling on this case), was a Lieutenant in the Navy

Harry Pregerson, who died in Nov 2017 after 28 years on the 9th circuit (active at the time of ruling on this case), was a First Lieutenant in the Marine Corps. Please note, he was severely wounded during the Battle of Okinawa (1945). Yes, THAT Okinawa.

Dont get me wrong, I find anyone who wears any award/badge/Tab/uniform/etc that they didn’t earn to be very disrespectful and inappropriate. However, it is not unconstitutional.

Additionally, Kirk S. writes, “I don't believe it is free speech. It's an act, speech derives from forms of communication. Wearing a medal not earned is just disrespectful and has nothing to do with speech.” That, simply, is a limited understanding of how speech is defined, particularly by the Supreme Court. Speech is not limited to spoken communication. Or hand gestures. Etc.

Again, I don’t support people who wear medals they didn’t wear. However, I do support their right to do so. Just as I don’t think that cherry picking and adding restrictions to the 2nd or 4th or 14th amendments, for example, I don’t think we should add many to the 1st, either. That means that sometimes, we take the good with the bad.
LTC (Join to see) your thoughts, sir?i
(0)
Reply
(0)

CPT Jack Durish
Posted 5 y ago
Damn, I wish I'd known this when I was punished for lying. Could you imagine my parent's frustration had I been able to claim that I was only exercising my First Amendment Rights? What a great lesson in civics for our children. Do you think they will begin teaching it in civics classes? Oh right, we don't teach civics anymore. Maybe that's how you can find a panel of jurists with their heads buried in a place where the sun doesn't shine...
(21)
Comment
(0)
show previous comments

CPT Pedro Meza
5 y
The judges need to be recognize for having the courage to disagree with a politician written act that was written only to get votes and not to support service members and veterans.
(0)
Reply
(0)

CPT Jack Durish
5 y
MAJ Matthew Arnold - Always, but not "liberal". There's nothing in their ideology that promotes liberty. Leftist. BTW, this is a great example. Thanks for making me pause to see it. Liberty comes with responsibility. Taking advantage of a right without taking responsibility is the way of the Left, not of a liberal. Claiming an unearned honor is not responsible, is it?
(1)
Reply
(0)

CPT Pedro Meza
5 y
CPT Jack Durish - I served for many years ad deployed so that all Americans can have the right to their Free Speech, that includes dudes with fake medals and Trumps, Cruz, Kardesian or Jenners.
(0)
Reply
(0)
Show More Comments
Read This Next
RallyPoint Home