SPC (Join to see)
2.28K
16
4
6
6
0
MY COMMENT, "My druthers is to find the positive in articles but this one takes the Oscar and the positive is elusive. Throw money at it and maybe it will go away. Department officials have quoted the rate of veterans suicides across the country as “20 per day,” reflecting past figures which included active-duty military, guardsmen and reservists who served on active duty, and National Guard and reserve members.

If the aforementioned military members were included, it would have pushed the suicide rate for the total veteran-connected group to about 21 individuals per day. So it resembles that if you cannot manage to the root problem lets just discount some military groups to reduce the numbers - Disgusting!

This last week I learned of a veteran that asked for help at the VA and was turned down because they did not believe he was suicidle. That's direct from the veteran, and may suggest that instead of playing with numbers they might concentrate on having skilled people work with our veterans that need help."

Veterans suicides rose in 2017 despite concerted efforts in recent years from federal officials and lawmakers to address mental health and emergency intervention services within the military community.

Veterans Affairs officials noted in a new analysis released Friday that because of a data delay, their report does not take into effect any new initiatives put in place over the last 22 months. They also emphasized in the report that suicide prevention has become a major public health problem throughout the country, not just in the veterans community.

“Veterans do not live, work, and serve in isolation from the community, the nation, or the world,” the report states. “The issue of suicide in the U.S. also affects the veteran population.”

But the increase in the number of veterans who die by suicide represents another setback for advocates who have worked in recent years to address the problem through public awareness campaigns, easier access to psychological treatment and aggressive messaging against the stigma of seeking mental health care.

Department officials in recent years have quoted the rate of veterans suicides across the country as “20 per day,” reflecting past figures which included active-duty military, guardsmen and reservists who served on active-duty, and National Guard and reserve members who were never federally activated.

Officials said they changed this year’s report to focus solely on veterans to avoid confusion about the population they monitor and directly assist. If the other military and never-activated reservist numbers were included, it would have pushed the suicide rate for the total veteran-connected group to about 21 individuals per day.

Nearly 87 Americans die by suicide each day, according to federal statistics.

Almost two-thirds of the suicide deaths among veterans in 2017 were individuals who had no contact with the Veterans Health Administration. VA officials in recent years have focused on public outreach efforts to address that problem, noting limited opportunities to share information on support services with veterans who they don’t interact with regularly.

In a letter accompanying the report, Dr. Richard Stone — executive in charge of the Veterans Health Administration — said that suicide “is a national public health problem that disproportionately affects those who served our nation.” He called upon community partners to work with the department on “actionable, manageable steps” to address the problem.

Earlier this year, President Donald Trump announced the formation of a new task force led by VA Secretary Robert Wilkie to focus on the issue of veteran and military suicide prevention. Among the issues that group of federal officials is considering is how to more quickly compile national suicide data, to provide quicker analysis of how prevention programs are performing.

The task force is expected to issue a formal report early next spring.

The full suicide report is available on the VA web site.

Veterans experiencing a mental health emergency can contact the Veteran Crisis Line at [login to see] and select option 1 for a VA staffer. Veterans, troops or their family members can also text 838255 or visit VeteransCrisisLine.net for assistance. 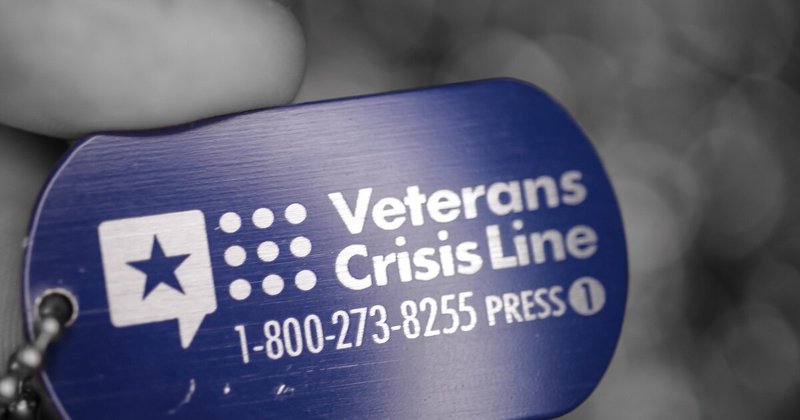 MAJ (Join to see)
Posted >1 y ago
It is imperative for veterans to switch from reasons to die to reasons to live. That saved my life.
(1)
Comment
(0)
Show More Comments
Read This Next
RallyPoint Home