LTC (Join to see)
36.3K
81
46
12
12
0
A veteran is against open carry because it can "trigger" PTSD? He is at least professional in his comments, but where do you draw the line? What if a veteran is "triggered" by PTSD when he sees a cop with a gun? Or a siren on a fire truck? Or lights changing at a traffic intersection? This also reminds me of veterans against fireworks on 4th of July. If somebody is suffering they should seek out mental health services, not media attention and expect the rest of society to conform to them. Just my thoughts, but I would love to hear from others on this. 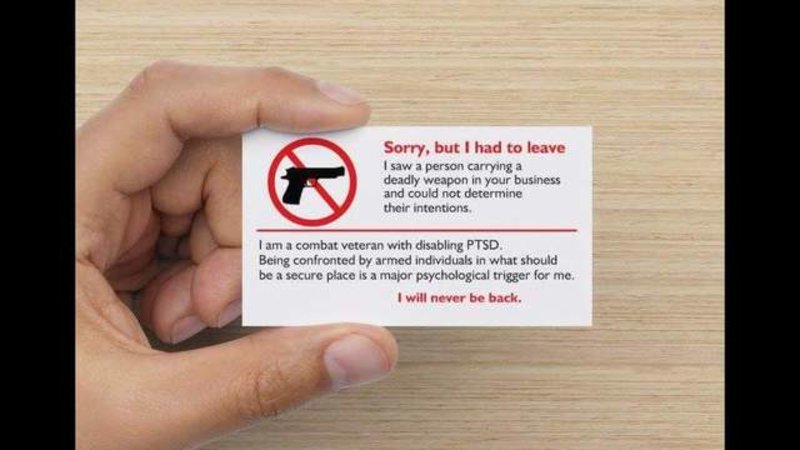 Posted from yourbasin.com
Posted in these groups:

SPC(P) Jay Heenan
Posted >1 y ago
I am really angry about this. Not only because of the anti-gun push, but more because he is shedding really negative light on an already delicate issue a lot of my brothers and sisters deal with. PTS already has a bad enough stigma, why in the hell would you try to make it worse? I still think that there is someone else behind this guys antics. Disabling PTSD from Desert Storm? At the end of the day, this guy is hurting his brothers and sisters and being a huge blue falcon.
(18)
Comment
(0)

Kathlean Keesler
>1 y
i tend to agree however I've not once considered this. Have you viewed the movie Revelation:Dawn of the global gov't WITH General William G Boykin speaking ? Easy Google search, or I watch it on YouTube.
(0)
Reply
(0)

Capt Richard P.
Posted >1 y ago
My fear increases when I see others openly armed and do not know them. So I leave the situation quietly, or position myself well to observe and form judgements. This applies in sliding scales based on badges of experience and authority from real badges and uniforms to instructor positions etc.

Further, from what I've been taught PTS becomes a disorder when avoidance is employed. When you avoid the challenging memories or stimuli and avoid trying to deal rationally and calmly with stimulus and response. So, am I nervous when I hear gunshots or fireworks? Yep. Do I seek out crowded areas where I know there will be both or either? Nope. Do I work to acclimate myself to the sounds and sights in more controlled settings around people I trust? Yep.

Capt Lance Gallardo
5 y
Perfect reason to get or use a CCW (or open carry ) is when you are far from LE and on your own in the woods. You might have to defend yourself against a Bear or a mountain lion. Bears are no joke in Alaska which still has a sizable Brown Bear (grizzly bear) population and people who are serious about bear protection usually bring a serious bear stopping slug thrower with them, usually a cast iron, bone breaking bullet, big enough and fast enough to pierce the thick hide and skull bone of a grizzly. We are talking 10 MM and up here, 45/70 or 500 Casull or 500 S & W type revolvers (with cast iron, big grain bullets), or shotgun slug 12 gauge (probably the best option for bears at close range);

"You can argue—and many do—that pepper spray is a more effective bear stopper than any gun. We’ll leave that aside for now, because this blog is not called “The Spray Nut.” Instead, we’ll assume you have already debated guns vs. pepper spray and opted for a gun. (Or you may decide to carry both.)

Not surprisingly, I would tell you to take a shotgun over a handgun. Shotgun slugs have about three times the muzzle energy of a .44 magnum and make much bigger holes. Unless you are a practiced handgunner, a .44 magnum is a difficult gun to shoot straight—even at a very big target.

The gun should be a reliable 12 gauge pump with a 18 ½ to 20 inch barrel and should be smoothbored with an Improved Cylinder choke.

The barrel should be plain with nothing more than a brass bead, if that. Iron sights won’t be necessary up close and might catch on something at just the wrong time. I would fit it with some kind of tactical sling that would be comfortable for carrying the gun through the brush for days on end until I finally, urgently needed it. And, while the standard magazine-full of four shells should be enough, a magazine extension might make you feel better.Whatever gun you choose, it should have a safety located in the same place your other shotguns have safeties (top, front of trigger guard, back of trigger guard) so you can take it off without thinking.

For ammunition, a fullbore slug like a Foster-style or a Brenneke is the best choice. Sabot accuracy doesn’t matter, because you will only be shooting at a bear at range of a few steps." From: http://www.fieldandstream.com/blogs/gun-nuts/2013/05/loaded-bear-choosing-shotgun-and-shell-combo-alaska

Loaded For Bear: Choosing a Shotgun and Shell Combo for Alaska

You can argue—and many do—that pepper spray is a more effective bear stopper than any gun. We’ll leave that aside for now, because this blog is not called “The Spray Nut.” Instead, we’ll assume you have already debated guns vs. pepper spray and opted for a gun. (Or you may decide to carry both.) Not surprisingly, I would tell you to take a shotgun over a handgun. Shotgun slugs have about three times the muzzle energy of a .44 magnum and make...

MAJ (Join to see)
1 y
Capt Lance Gallardo - How you choose to carry is a choice, you choosing NOT to bring attention to yourself is simple preservation of your own peace. Seems to me you just don't want to deal with BS from snowflakes or over aggressive PD. I following the same logic everyday.. Not that I have seen it in a while, but if someone was in my presence open carry I would naturally increase my situational awareness until I or they are out of the area. Plan to give them a thumbs up and tell them to keep up the good fight for being brave.
(0)
Reply
(0)

CPL Joseph Elinger
5 mo
A holstered weapon threatens no one.
A shouting & verbally abusive Cop wearing a holstered weapon is a stranger, a wildcard, & as much a threat as any other stranger.
I made that VERY clear to a Police Sargent once, regarding a poorly executed stop by a butthead officer.
(0)
Reply
(0)

CPL Joseph Elinger
5 mo
Capt Lance Gallardo
Want to stop a bear for sure.
Put a round in the neck.
(0)
Reply
(0)

SGM David W. Carr LOM, DMSM MP SGT
Posted >1 y ago
People have to know what effect you PTSD triggers and make it a point to avoid those situation.
The idea that open carry would trigger PTSD seems like a stretch to me personally.
My concern is this would lead the antigun people to take veterans weapons using mental health
(9)
Comment
(0)

SSG(P) (Join to see)
3 y
But the decision lies with the person feeling threatened, not you. Much like women who feel they are entitled to wear anything they want anywhere they want. That might be OK with you and I but the weirdo in the bushes spanking his monkey may react differently.
You can't bring a weapon to the VA for a reason
(0)
Reply
(0)

MAJ (Join to see)
1 y
SSG, the VA is a federal facility which is the ONLY reason you cannot carry a weapon. Same as every Federal facility. Has Zero to do with "triggering" anyone. Why don;t you Google when guns were banned from Federal Facilities, learn something.
(0)
Reply
(0)
Show More Comments
Read This Next
RallyPoint Home