Wall Street Timeline: From a Wooden Wall to a Symbol of Economic Power

"Wall Street Timeline: From a Wooden Wall to a Symbol of Economic Power
Initially built by the Dutch to stave off the English, Wall Street evolved to represent much more than a Manhattan address.
Wall Street runs for a short eight blocks in lower Manhattan and is headquarters of America’s financial markets. But Wall Street is far more than a location—it has been adopted as a term to describe all U.S. financial institutions and U.S. economic power. It has been portrayed alternatively as powerful, hot-shot, corrupt, greedy, excessive and bullish. Below is a timeline of the location—and all that it has come to represent—through history.

Wall Street as a Wooden Wall

• 1652: During the Anglo-Dutch Wars, hostilities between England and the Netherlands spilled over into North America. The Dutch settlers of Manhattan Island, called New Amsterdam at the time, feared England was planning to attack and constructed a wooden wall as defense.

Costing the settlement 5,000 guilders and constructed from 15-foot planks and dirt, the wall was 2,340 feet long and nine feet tall. It featured cannons and spanned between two gates, one located at what is now the corner of Wall Street and Pearl Street, and the other on Wall Street. and Broadway. Called “de Waal Straat,” the earthen part of the structure came from earlier fortifications built to defend against possible attacks by Native Americans and pirates. The labor on the wall is believed to have been performed by slaves.

After a half century, the wall fell into disrepair and was slated for demolishment but was instead restored in 1693 in fear of a French invasion. It was finally demolished in 1699.

• December 13, 1711: Wall Street was made the site of the government-sanctioned slave market in New York City. In operation until 1762 at the site of one of the original Wall gates on Pearl Street, the market was a wooden building that provided the city with tax dollars from the active trade inside.

• 1731: A first attempt at creating a public library was made by the Society for the Propagation of the Gospel in Foreign Parts, located in City Hall on Wall Street.

• 1788: City Hall was officially renamed Federal Hall after New York City became the first capital of the United States. It was the site of several important historical events, such as the drafting of the Bill of Rights by Congress and the inauguration of George Washington as the first president. Federal Hall was later the first home of the New York Historical Society but was demolished in 1812.

• May 17, 1792: Security traders who the previous year had begun to meet and make transactions under a Buttonwood tree on Wall Street banded together officially under the Buttonwood Agreement. The agreement was crafted to keep out government intervention and outsiders who wanted to join. Anyone who wasn’t a group member who wanted to buy stock had to do so through an approved broker. The signees first set up offices at the Tontine Coffee House, on the corner of Wall Street and Water Street. The building was also used for slave trading. The board moved into the Merchants’ Exchange building at 55 Wall Street 10 years later.

• March 8, 1817: After visiting and observing the Philadelphia Merchants Exchange, the Buttonwood traders used that as a model for their own version which they called the New York Stock and Exchange Board. The board created a constitution and elected a president, Anthony Stockholm, who oversaw each morning by announcing the stocks being traded.

• December 16, 1835: The Great Fire of 1835 decimated 700 buildings in lower Manhattan, totaling $40 million in damage, though only two died in the fires. Wall Street suffered numerous property losses, including the Tontine Coffee House and the Merchants’ Exchange building.

The Stock Ticker Is Born

• 1867: The stock ticker was introduced on Wall Street. A creation of Edward A. Calahan of the American Telegraph company, the bulky machines featured wheels of narrow paper strips detailing transactions. The reports were dispensed to clerks, who delivered them to typists via pneumatic tube. The typists sent the information to brokers through the telegraph.

• February 5, 1870: The first Wall Street stock brokerage owned by women opened. Ohio-born sisters Victoria Woodhull and Tennessee Claflin were funded by Cornelius Vanderbilt. Vanderbilt was a grieving widower whom the sisters had targeted with seances. Tennessee eventually became his lover.

Women would have a tougher time infiltrating the New York Stock Exchange directly. Women were allowed out of the back rooms in the 1940s to work on the trading floor, but it wasn’t until 1967 that Muriel Siebert became the first woman to own a seat on the NYSE.

• 1882: The first electricity plant in the world is launched on Pearl Street by Thomas Edison in order to power 7,200 lamps on Wall Street.

• July 8, 1889: The Wall Street Journal debuted with a two-cent cover price, published by Dow Jones & Company. Its most popular feature was the “Dow-Jones Industrial Average,” an index that charted the stock performance.

• 1903: After two years of construction, the new New York Stock Exchange building opened at 18 Broad Street. Designed by architect George B. Post, the building boasted grand Corinthian pillars, statues by John Quincy Adams Ward, a marble trading floor and a 70-foot high ceiling. The building was the earliest in America to feature air conditioning, with a system designed by engineer Alfred Wolff. Beneath the building were hundreds of underground vaults where stock certificates were kept.

• September 16, 1920: A wagon parked in front of the Assay Office exploded at 12:01 p.m. The explosion was so powerful that it reverberated through the streets and sent a car flying into the 34th floor of the Equitable Building, before crashing down to the ground. Thirty people were killed and hundreds injured. Many horses also died and several buildings were destroyed. The area was bombarded with police as trading immediately ceased.

Investigators believed the target to be J.P. Morgan’s bank since the majority of victims were clerks and stenographers working there, though Morgan, himself, was on vacation.

Anonymous anarchists left flyers in mailboxes threatening further bombings and the crime was eventually pinned on an Italian anarchist group called the Galleans. A three-year investigation by the Bureau of Investigation never yielded any arrests.

• October 24, 1929: The stock market surged as high as 50 percent starting in 1928, despite indications that the economy was on the wane and predictions of stock market collapse by economist Roger Babson. It came to an end on what is now called Black Thursday, when the market dropped 11 percent.

By October 28, known as Black Tuesday, a panic ensued with 16 million shares traded away, and the over the next day, the market lost $30 billion. There was immediate recovery, but the damage was done and the market continued to slide until 1932, when it reached its lowest level ever.

It took all of the 1930s for the market to recover, a period called the Great Depression, which was defined by mass unemployment and poverty.


• October 19, 1987: Wall Street experienced one of the largest single-day crashes in 1987 with a $500 billion loss as markets plummeted worldwide. The computers of Wall Street were programmed to sell stock at specific price thresholds. A domino effect of computers liquidating thousands of stocks ensued, with clerks unable to stop the transactions. The automated program also prevented buying, which wiped away any bids. After this, special rules were implemented to allow automated protocols to be overridden and prevent future disasters.

• September 11, 2001: Terror attacks in the financial district result in 2,996 deaths, over 6,000 injuries and the destruction of the twin towers of the World Trade Center. Destruction and debris in the neighborhood created limited access to the financial offices that survived and damaged communication networks, shutting down the market for seven days. The disaster was followed by a period of heavy development in the area with a number of building projects arising, most notably One World Trade Center.

• September, 2008: In 2008, Wall Street was at the center of the worst financial crash since the Great Depression. Largely the result of mishandling of subprime mortgages, the crisis resulted in Freddie Mac and Fannie Mae being taken over by the government and Lehmann Brothers filing for bankruptcy.

With many other banks expected to follow, a federal bailout for trillions of dollars was announced. A crash in housing prices followed and across the country, there were massive foreclosures and seizures of homes.

• September 17, 2011: As part of a response to the aftermath of the financial crash and housing market disaster, the protest movement Occupy Wall Street descended on Zuccotti Park. Protestors set up an encampment to draw attention to economic inequality and call for the prosecution of the banks behind the financial crisis. Across the country, Occupy encampments and protests sprang up.

The movement was considered a leader-less one, operating on the principle of anarchy. Forced out of Zuccotti Park on November 15, 2011, the Occupy movement shifted its actions to other locations, organizing activist groups in the long term that re-emerged during the 2016 presidential election." 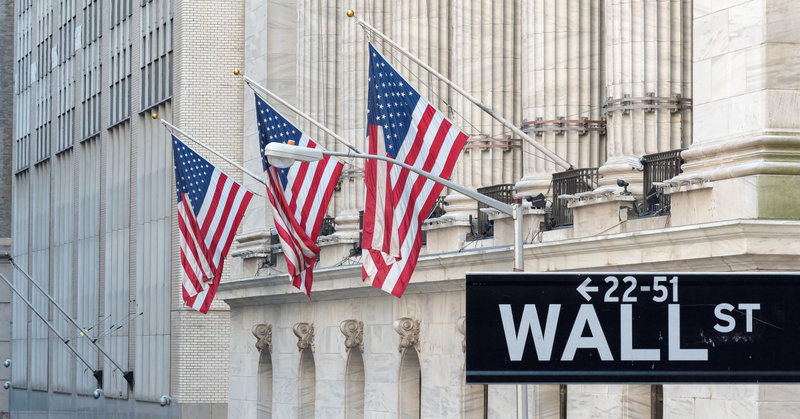 Wall Street Timeline: From a Wooden Wall to a Symbol of Economic Power