Who was the bling king of Sutton Hoo?

When I was growing up Sutton Hoo was undergoing its third and most extensive excavation. I misheard it as a question: Sutton Who?

For years I believed that the great burial mound in Suffolk concealed within its name a secret, a haunting question of identity. The placename actually derives from Old English, hoh being a hill shaped like a heel spur, but to my childish imagination it represented an unsolved riddle some 14 centuries old.

And it still does. The enigma of who is buried at Sutton Hoo has never been conclusively solved. The release of The Dig, the film starring Carey Mulligan and Ralph Fiennes and based on John Preston’s novel, will once again focus attention on one of the last great historical mysteries: the Sutton Hoodunnit.

An enormous amount is now known about the great ship-burial site, discovered under a mound of earth near the harbour town of Woodbridge in 1939.

The magnificent trove suggests its owner was a voracious and wealthy collector: a crested helmet with a human mask of tinned bronze, a set of nested silver bowls from Byzantium, accessories set with Sri Lankan garnets, a silver ladle from the Mediterranean and a great gold buckle of breathtaking beauty.

Here were all the necessary accoutrements and ingredients for a great feast in the afterlife, including a lyre for musical entertainment, an iron lantern filled with beeswax, luxury clothing, cups from the horn of the now-extinct aurochs, and a wooden bucket, presumably to clear up after the party.

We know that the grave was the final resting place of a person of power and wealth, a cosmopolitan potentate of political significance and exquisite taste. We just do not know for certain who he was.

Since no body was found in early excavations, the idea took root that Sutton Hoo was not really a grave but a cenotaph, a symbolic memorial in honour of someone, or several people, a celebration of Anglo-Saxon kingship but perhaps no single monarch. Then in 1968 traces of phosphate were discovered indicating that over the centuries a human body had disappeared into the acidic soil.

Various candidates were put forward. Some suggested that the occupant might not be a king at all but a wealthy status-seeker, a trader who chose to be buried with a staggering array of 7th-century bling. Others argued that, given the quantity of objects from across Europe, he could have been a rich foreign visitor who happened to have washed up with his treasure in Suffolk. Several lumps of black material found at the head and foot of where the body lay have been identified as Syrian bitumen, a naturally occurring form of asphalt found in the mortar of Mesopotamian ziggurats, which are pyramid-like temples

Yet others speculated that the man might have been Swedish. Some of the armour and other burial objects are similar to artefacts found in Sweden and dating to before the Viking period, but the Scandinavian connection remains unclear and unproven.

The most probable occupant of Sutton Hoo was Raedwald, King of East Anglia, the supreme monarch south of the Humber at the beginning of the 7th century, described in the Anglo-Saxon Chronicle as “Bretwalda”, an Old English word meaning “Britain-ruler” or “wide-ruler”.

Raedwald reigned from about 599 until his death around 624. He was scion of the Wuffinga dynasty, which claimed descent from the god Woden, a Germanic version of the Norse god Odin and king of the Anglo-Saxon pantheon.

Little is known of his reign since the royal records, held in East Anglia’s monasteries, were almost certainly destroyed in the Viking conquest of the 9th century. Raedwald appears to have undergone Christian baptism but hedged his bets by holding on to paganism. This irked the Venerable Bede, who wrote disapprovingly that Raedwald “seemed at the same time to serve Christ and the gods whom he served before”.

The circumstantial evidence for Raedwald’s claim to Sutton Hoo is strong. The Anglo-Saxon royal palace of Rendlesham is four miles away. The magnificence of the collection suggests a royal personage employing the finest goldsmiths in Europe, and sufficiently powerful to extract tribute from subject rulers. A “sceptre” in the form of a whetstone is thought to be a symbol of office of the Bretwalda. Coins at the site have been dated from around the time of Raedwald’s death. The bowls and spoons carried Christian significance and may indicate a convert from paganism, albeit a partial one.

There is one other intriguing clue. In most Anglo-Saxon burials the sword was placed on the left side of the body. The Sutton Hoo sword, with its gold hilt inlaid with garnet cloisonné and contained in a wooden scabbard lined with oily sheep’s wool to keep the blade bright, was placed on the right. The king was probably left-handed, which may have given him an advantage in combat and increased his status still further.

The case for Raedwald is not and probably never will be definitive. Other contenders include his stepson Sigeberht or his son Eorpwald, both of whom converted to Christianity, the former retiring to a monastery while the latter was killed by a pagan assassin in about 627.

Since its discovery in 1939 Sutton Hoo has shed remarkable light on the supposedly Dark Ages, while retaining a mystery at its heart: the seafaring, religiously adaptable, left-handed, music-loving warrior and collector of beautiful objects from around the known world, who was laid to rest with everything that befits a mighty king. Except his name. 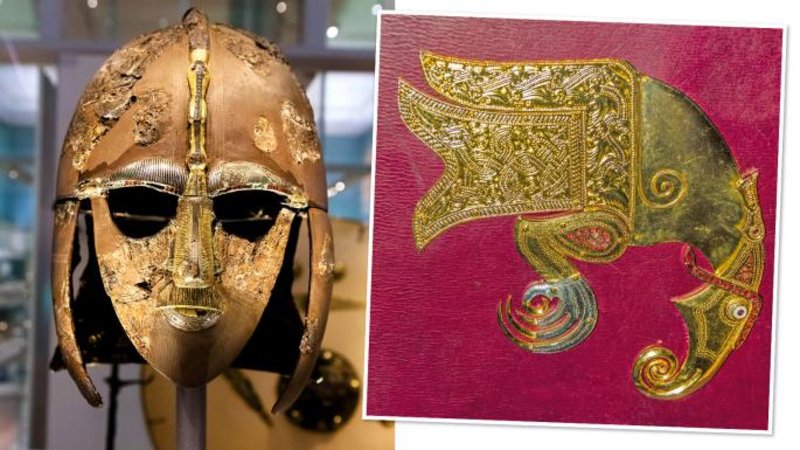 Who was the bling king of Sutton Hoo? 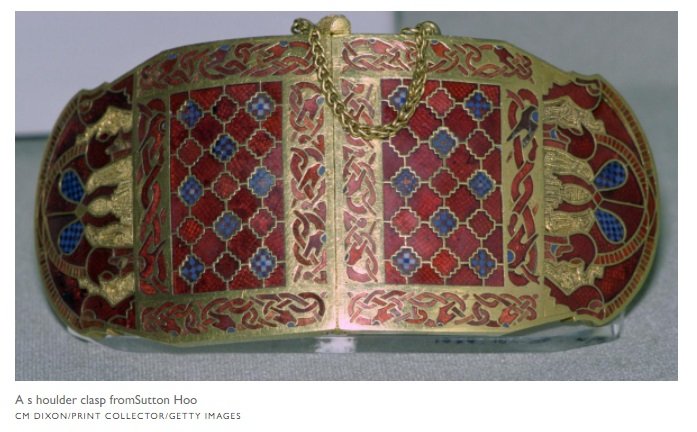