SFC (Join to see)
1.46K
15
10
8
8
0
https://www.smithsonianmag.com/smart-news/worlds-longest-pedestrian-suspension-bridge-opens-portugal-180977641/?utm_medium=email&utm_source=rasa_io&PostID=29674084&MessageRunDetailID= [login to see]
What a rush it would be to cross this baby!!! I think of the rope bridges we made in AIT and they pale in comparison.

At nearly a third of a mile long, a newly opened, record-breaking suspension bridge in the town of Arouca, Portugal, demands a bit of a head for heights. As Reuters’ Catarina Demony reports, the bridge, which hangs 570 feet above the Paiva River, consists of a see-through metal grid that wobbles with each step.

RELATED CONTENT
A Dozen Indigenous Craftsman From Peru Will Weave Grass into a 60-Foot Suspension Bridge in Washington, D.C.
“I was a little afraid, but it was so worth it,” Hugo Xavier, a local resident who was allowed to cross the bridge last week ahead of its official opening, tells Reuters. “It was extraordinary, a unique experience, an adrenaline rush.”

Dubbed the “516 Arouca” for its length in meters, the bridge cost $2.8 million and took about two years to complete. Local officials hope it will entice visitors to the region, attracting new investment and encouraging individuals to settle down in the area.

The 516 Arouca is the longest pedestrian suspension bridge in the world, overtaking Switzerland’s 1,621-foot Charles Kuonen Suspension Bridge by about 70 feet, reports Rachel Treisman for NPR. The longest comparable bridge in the United States is Tennessee’s Gatlinburg Sky Bridge, which stretches a comparatively modest 680 feet across a valley in the Great Smoky Mountains.

Per Lonely Planet’s Andrea Smith, the bridge is located in the Arouca Geopark, a destination in the northern region of Portugal where visitors can hike, go white water rafting and explore historical sites. Arouca is designated a Unesco Global Geopark for its significant geological characteristics. Rock formations in the area hold clues to the merging of supercontinent Gondwana and other landmasses to create Pangaea around 300 million years ago.

516 Arouca
Construction of the record-breaking bridge took two years to complete. (Octavio Passos / Getty Images)
The park is also home to Neolithic graves and Roman and medieval ruins, as well as the Monastery of Arouca, which served as a religious center for nuns, and sometimes monks, between the 10th and 19th centuries.

As a statement notes, the new bridge complements a five-mile series of wooden walkways along the left bank of the Paiva River, where travelers can explore river beaches and quartz formations, in addition to viewing rare wildlife.

The 516 Arouca was inspired by Inca bridges across valleys in the Andes Mountains. As Abigail Tucker wrote for Smithsonian magazine in 2015, the Inca probably built at least 200 bridges across gorges and other geographical barriers in the large swath of South America that their empire controlled. Made of woven grass ropes, the bridges were strong enough to hold a marching army.

The new bridge in Portugal is made mostly of metal, with mesh trays connected to steel cables running from huge V-shaped pillars on each side of the river gorge. Its design draws on Tibet-style footbridges, according to Lonely Planet.

“It is very well built,” Rui Brandao, another Arouca resident who braved the trip across the bridge, tells EuroNews’ Luke Hurst. “I strongly advise you to come even if, like me, you are afraid of heights. I must admit that I did not suffer from it at all while crossing.” 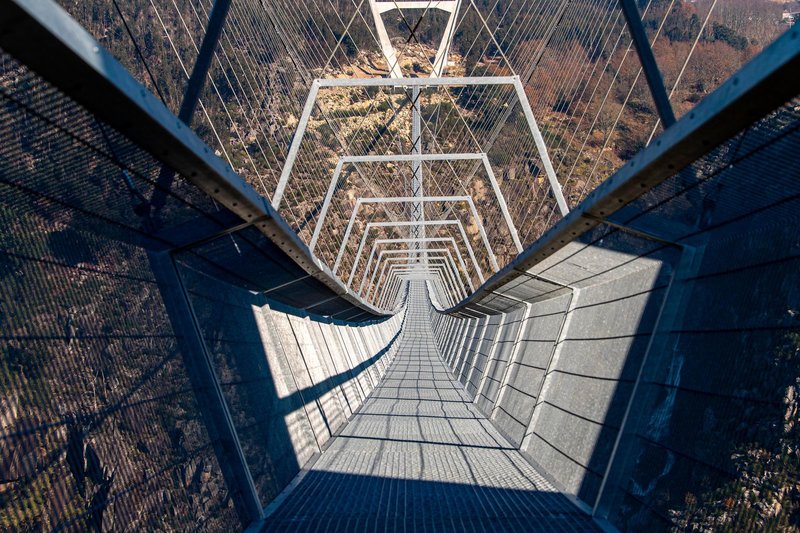 Posted from smithsonianmag.com
Posted in these groups:

SSG Samuel Kermon
Posted 1 y ago
I have walked across a few shorter ones and always had a small chill 8n the stomach.
(1)
Comment
(0)

SFC (Join to see)
1 y
SrA John Monette - When you got to go you have to go... at least we did in the old days.
(0)
Reply
(0)
Show More Comments
Read This Next
RallyPoint Home