SFC (Join to see)
3.63K
8
4
2
2
0
Researchers are following up with more than 70,000 soldiers as they try to learn more about troops' experiences with stress, mental health and other risks for suicide.

The work is part of an extensive and expansive survey that first began in 2010.

From 2010 to 2014, the Army surveyed 110,000 soldiers about their experiences and found that commonly accepted risk factors like combat trauma were not the definitive reasons soldiers were taking their lives.


More than 70,000 of those soldiers agreed to be contacted again by researchers, so starting in September, the Army got underway with a second phase of the survey, following up with those soldiers to see how their experiences have evolved since the study ended.

The Study to Assess Risk and Resilience in Servicemembers - Longitudinal Study builds off of the original STARRS project, which yielded research breakthroughs, including evidence that the increase in soldier suicide couldn't be attributed to an increase in deployments, and that women were the most likely group to attempt suicide, though not the most likely to succeed.

But today's Army is different than the force the team studied years ago, according to a special projects lead at the Army Public Health Center, one of those who combed through the thousands of survey results from 2010 to 2014, and 1.6 million health records from 2004 to 2009, that made up STARRS.

"What was true for 2004 to 2009 may not be as true or true at all five, 10 years later," Dr. Kenneth Cox, a clinical epidemiologist, told Army Times in a phone interview. "So the Army has to keep track of those kinds of things."

For this round, the Defense Department has taken over leadership and funding of the study, per a White House executive order for more research into the behavioral health of veterans.

Of the 72,000 soldiers who originally took the survey, about 35,000 were in their first week at basic training, Cox said. The longitudinal study will check in on their experiences since becoming soldiers, whether they have stayed in or transitioned back to civilian life.

"The problem is that they were brand new and we didn’t have hardly any data about them, and we had to watch them for a while to get that data," Cox said.

The basic trainees were a good control group, but their mental health experiences were confined to their pre-Army days. Now researchers can look at how their service has shaped them.

"Fortunately, suicides are rare, but we’d like them to be more rare," Cox said. "They don’t show up very quickly, even if they’re going to, in that group of people."

The remaining group was made up of a cross-section of soldiers, including 10,000 from three brigade combat teams who were surveyed before and after deployments. The researchers will circle back with those soldiers also to see how they have handled the ensuing years.

To resume the study, Cox said, the team began reaching out to the first batch of the 72,000 soldiers last month. The plan is to contact a few thousand each month on an 18-month cycle, surveying everyone at least twice during the study.

The team expects a lot of the participants will be out of the Army by now, but that will help deepen their research.

"That is a key difference," Cox said. "STARRS only dealt with people who were serving. We’ve already found that transitions in general are times of vulnerability in general."

This time around, the team also wants to put a special focus on women, Special Forces soldiers and drilling reservists. The original STARRS survey found that women who joined at over 25 were the most likely to attempt suicide and that special operators were not at any higher risk for suicide, while only interviewing activated reservists.

There is reason to believe that following those groups with more focus will round out their research, Cox said. For instance, since the first STARRS, women have been allowed to go to Ranger School and serve in combat jobs, which could statistically change the mental health experiences of women in the Army.

"The fact is, is that if they do start to go into those [jobs], what we learned about women before may not be valid anymore," Cox said. "So either different kinds of women are interested in those jobs than the ones that we were studying before, or because of the nature of the training or the nature of the job -- all of those things have to be thought about."

Special Forces suicides were unusual, according to original STARRS data, but Cox said the community reached out for more research.

"Sometimes there are challenges in the data, and maybe we weren’t always able to identify everybody as having had a special operations job, but then it became clear from within [U.S. Special Operations Command] that they felt that they did have a problem," Cox said.

The Special Forces STARRS research was mostly based on records from the 2004 to 2009 historical study.

"In more recent times, Special Forces has said, 'We’ve had a number of suicides, a number of motorcycle deaths and such, and evidence of risk-taking,' and all kinds of things that were concerning them," Cox said.

To get a wider pool of current operators, he said, the team may have to widen its research pool and start fresh with new participants. The study's mandate is flexible enough go add on to the existing group of soldiers if they feel they need more depth to get a statistically relevant result.

There's also a possibility that the study could be expanded to other services using their framework, he added, now that the study is overseen by DoD. 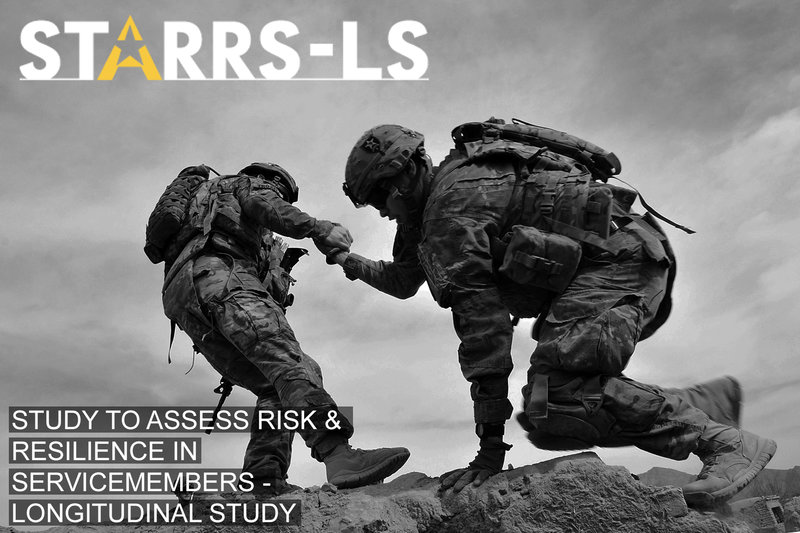 Sgt Wayne Wood
Posted 4 y ago
Interesting aspect of the SpecOps data... at what point does "risky behavior" cross over into "suicidal" or "death wish fulfillment"?

SPC Margaret Higgins
Posted 4 y ago
GOD bless all suicidal Soldiers. There is DECIDEDLY Hope at the end of the tunnel.
I am Living Proof of That. I was suicidal: for Twenty-Seven years.
Now, I not only consider myself to be a survivor, but a victor.
My Facebook: Group for Suicidal Active Duty and for Suicidal Veterans link is the following-
https://www.facebook.com/groupforsuicidalactivedutyandforsuicidalveterans.
SFC Joe S. Davis Jr., MSM, DSL
-Most Sincerely, Margaret C Higgins US Army (Ret), Coach

LTC Stephen F.
Posted 4 y ago
I am glad that the Army researchers have taken pains to follow up on the 2010-2014 suicide risk survey and that they have found 70,000 out of the original 110,000 original surveys SFC (Join to see). Hopefully this follow-up will be well-conducted and sensitive in terms of maintain privacy of those who responded.
Disclaimer: I am a trained and experienced ORSA familiar with good and bad study design and loaded questions.
(1)
Comment
(0)
Show More Comments
Read This Next
RallyPoint Home