SFC Joe S. Davis Jr., MSM, DSL
113K
35
17
10
10
0
You asked the Army for rolled-up sleeves, and you got them. You got black socks for PT and even earbuds in the gym. But what other uniform changes do soldiers want? What do you think Sergeant Major of the Army Dan Dailey should put at the top of his uniform to-do list? Well, we asked, and you answered. Here’s a look at some of your top requests. And we even ran them by Dailey, who wants to hear more from soldiers. 1. Kill the beret. Many soldiers are done with the beret. “I’ve been wearing it for 16 years now, and nobody that I’ve known has liked it,” one soldier wrote. Instead, he said, soldiers should stick with the patrol cap while in the Army Combat Uniform and the service cap when wearing the Army Service Uniform. Others called for the beret to be eliminated everywhere but in Special Forces, the 75th Ranger Regiment and the airborne community. SMA responds: Dailey said he doesn’t think the Army should get rid of the beret completely.

“We got rid of the day-to-day mandatory wear, but I think there’s a very important place for it,” he told Army Times. “I think soldiers look phenomenal in their dress blues with the beret on. If you get rid of the beret, what are you going to use? I think when the American public sees them, they see the beret.”

By far one of the most popular requests, soldiers want to be able to sport beards.

“Soldiers should be able to have facial hair as long as it’s groomed to a certain standard,” a soldier who only identified himself as Forever Foxtrot 1/48 wrote.

Others argued against the common anti-beard reason given by Army officials.

“I don’t want to hear the whole ‘pro-mask won’t seal properly excuse,’ because both people with shaving profiles and people in Special Forces don’t seem to have that issue,” another soldier wrote.

“All of us know soldiers that hate shaving thick beards so much that they factor that in when it comes time for re-enlistment,” he said.

Some soldiers pointed out that troops in foreign militaries are allowed to grow beards.

“After being stationed in Europe, I realized many of our allies are allowed to have beards, and they look professional and the U.S. Army gas masks seal just fine on them,” one soldier wrote. “If the U.S. thinks it looks unprofessional, have we told them that? I bet they wouldn’t appreciate that very much. We are the world’s best military. Let’s look like it.”

SMA responds: Believe it or not, Dailey is not against beards.

“It’s about readiness right now,” he said. “Can you or can you not seal your protective mask? I think we have to look at it. We have to research it. We have to be informed by it.”

“But I’m not an anti-beard guy, and neither is the chief,” Dailey said, referring to Army Chief of Staff Gen. Mark Milley.

3. Bring back the World War II ‘pinks and greens.’
The old school uniforms appear to be popular among soldiers.

“I think the Army should have a khaki working uniform for officers and [noncommissioned officers] in office positions,” one soldier wrote. “Think World War II Army.”

Some soldiers said the uniforms recapture a so-called “golden era.”

“I nominate World War II pinks and greens-style uniforms to make a return,” another soldier wrote. “It’s classy as hell, has a solid historical look, and you can tell the person wearing it is in the Army.”

“Bring back the [Eisenhower] dress coats, service cap instead of berets,” he said.

SMA responds: When it comes to pinks and greens, Dailey, who previously floated the idea of bringing back a version of the Ike jacket, wants to know what soldiers think about the World War II uniform before moving forward with anything.
4. No more Velcro.

Many of you hate the Velcro on your Army Combat Uniform.

“To my understanding, Velcro was introduced to save time and money, but in my experience, there is not a whole lot of benefit to it,” said Sgt. 1st Class Jean Burgos. “Once the Velcro is worn out, it is almost impossible to get your hook-and-loop fastener to stay put. This is especially true with the patches that have a tab.”

“This Velcro has got to go,” he said, adding that he wants the Army to go back to sew-on patches and name and branch tapes.

Velcro is “the most un-tactical thing we’ve added to uniforms next to the PT belt,” said Capt. Kyle Viehman. “From [training] to real-world missions, Velcro is an annoyance. If you barely brush up against something or someone, rrrrrrrrrip. If you reach into a pocket and grab something, rrrrrrrrrip. And it can be heard from all over.”

Viehman is in favor of zippers, buttons and sew-on patches.

SMA responds: Dailey said the Army is looking at removing the Velcro from the ACUs “because it’s an expense.”

There are no plans to change the pattern or design of the uniform, but the Army is looking at how it can “continue to adapt the uniform for the future,” Dailey said. “When you do things like remove Velcro, you reduce cost.”

5. Put rank back on the ACU collar.

“Can we please get our rank back on our collar?” one soldier wrote. “It’s pretty uncomfortable having to look at a female soldier’s chest to see their rank.”

The Army began placing rank insignia on soldiers’ chests instead of their collars when it rolled out the Army Combat Uniform.

“The center of the chest is a ridiculous location on the uniform,” wrote retired Col. Benny Richardson. “It almost seems like an afterthought as to where to place it after the ACU was developed. Not only is it difficult to see from a distance, it forces soldiers to stare into the chest of approaching soldiers.”

SMA responds: Dailey said he’s heard this complaint from the force, but the number of dissenting voices is small.

The design of the ACU “was well-informed by soldiers,” he said. “Soldiers designed this uniform, from top to bottom. I think if I did a survey, I think that the overwhelming number of people would say that this is the more appropriate thing to do.”
6. Don’t forget officer branch insignia on the ACU.

Many officers want their branch insignia back.

“If you walk into a [brigade combat team command post] these days, it’s hard to delineate or have an idea who is who and what their job is,” one soldier wrote.

Another wrote that he deployed as a brigade fire support officer for an aviation brigade and “I had to explain my role weekly.”

“When I look back, I guess it would be nice. Basically now we’re looking at their badges to delineate who they are, where they came from,” he said. “I’m a need guy. I’m trying to think, do we need to do it?”

Many female soldiers want to be able to wear earrings in the Army Combat Uniform, plus some want the ability to wear nail polish.

Current Army policy bans them both. Earrings are allowed in the Army Service Uniform.

These are two of the most common requests he gets from soldiers, Dailey said.

“Everywhere I go, I get it as a question from a young female soldier,” he said.

Right now, the Marine Corps is the only other service that doesn’t allow earrings in the combat uniform. All the other services allow nail polish.

SMA responds: Dailey said he keeps finding “a stalemate” on the two issues.

“I have senior females on my leadership council, and I actually defer to them on this,” he said. “I keep having senior female NCOs tell me no.”

Many argue against earrings and nail polish because it’ll be difficult to regulate, Dailey said.

“’If we do this, sergeant major, it’s going to get out of control,’” Dailey said he’s been told. “That’s probably true, but my counter to that is not all of them. I’m not going to base the needs and policies of the Army on the few that aren’t disciplined. We as noncommissioned officers should be able to keep that at bay.”

For him, Dailey said, it’s about function, capability, discipline and standards.

“Is it going to prevent you from doing something?” he said, adding that soldiers should have a say in informing his decision.

“I spend a lot of time going around asking male and female soldiers alike, and I’m getting the split right down the middle of ‘yes, we should,’ and ‘no, we shouldn’t,’” Dailey said. “I think we’re pretty much on a decision with earrings, and that’s no.”

No word yet on nail polish.

8. Flight suits for aviators.
Aviators do not seem to be huge fans of the Army Aircrew Combat Uniform, which looks very much like the Army Combat Uniform.

“I love what I do and serving in the Army, but I wish the Army would celebrate its aviation branch like the other services do,” wrote Capt. David Grojean. “Let flight crew look like flight crew again! Authorize wear of the one-piece flight suit again. It is cheaper and all of the other services wear them, so why is the Army spending additional dollars on a different uniform?”

So why not aviators?

“For us Army aviators, the onesie pickle green flight suit has been the iconic image of a pilot,” he wrote. “Let us look like pilots.”

But the point was to create one uniform that meets all requirements – including fire protection – that all can wear, Dailey said.

“We wanted to find the mean, the mode and the medium,” he said. 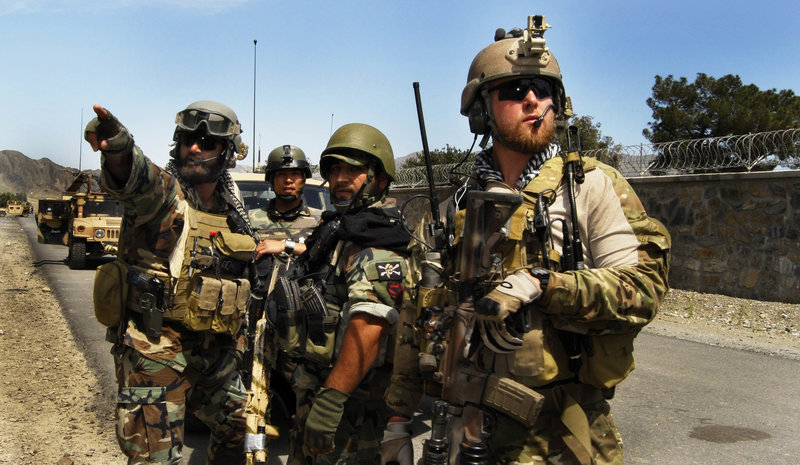 SFC George Sease
Posted >1 y ago
GET RID OF THE BERET. Let the specialized units wear them if they want to. The beret doesn't do a damn thing when it's raining, hot as the devil
and doesn't keep the sun out of your eyes. The older uniforms (WW II and Korean War) looks better and I my opinion wear better
(7)
Comment
(0)

SMSgt Lawrence McCarter
2 y
Oh, I don't know, the beret can be a pretty soggy mess in the rain and your right about it being hot, can't even shade Your eyes. Nothing like the lighter skin on Your forehead where the beret covers and a good tan where it didn't. A great tan line on Your forehead, what could be better ? (The USAF Security Police changed to them so I've seen and experienced a bit of that. )
(0)
Reply
(0)

LTC Peter Hartman
Posted >1 y ago
Patrol caps for the ACUs and whatever the new field uniform is called. Berets for the dress uniform.

SFC William Farrell
Posted >1 y ago
SFC Joe S. Davis Jr., MSM, DSL I liek the beard idea Joe. And if women want equal opportunity and can have long hair, why cant we. And get rid of the berets, I hate them!
(3)
Comment
(0)

A1C (Join to see)
>1 y
Never really understood the beard thing. "So your gas mask fits" and "nuclear attack" is a damn cop out. That's all we get here from medical. Meanwhile, we have special ops overseas we full grown lumber jack beards in Asia and Afghanistan. Give me a better lie than that at least.
(1)
Reply
(0)
Show More Comments
Read This Next
RallyPoint Home