SGT (Join to see)
4.3K
25
14
6
6
0
It's usually hard for me to comment on these things because automatically my opinion IS biased (not matter what I do its going to be biased, as I relate, I am a woman), and I expect people to say I'm biased.
BUT I like to look at the facts about these things because as Leaders, we should all have a bigger scope on whats happening now in front of us than making only a kill shot through your 68 (or ACOG if your lucky). If it had been an other MOS, it wouldn't have been news. If it had been a male it wouldn't have been news either and lets be real; it's because its not uncommon. My opinion: Yes, what she DID sucks. Women are making history with the combat MOS's opening up and have a spotlight or that ACOG on them, and her behavior reflected negatively on that. I would have rather have seen her try and fail, then to go AWOL. Instead the perception now is that she was in it for the glamour, which I don't disagree with anyone about maybe WHY she did it.

But as leaders, the lesson we should be teaching our Soldiers about this is that the BEHAVIOR, not the SEX, is what is unacceptable about this. That as a Soldier, she did not have what it takes to have value in the Army Values.

With that said, I hope that we can teach facts from this to our Soldiers, and I plead that women who may be considering taking on these tough challenges will take these times very seriously. Perception is reality and it will make a difference right now. I'm proud of ANYONE who meets the STANDARD. 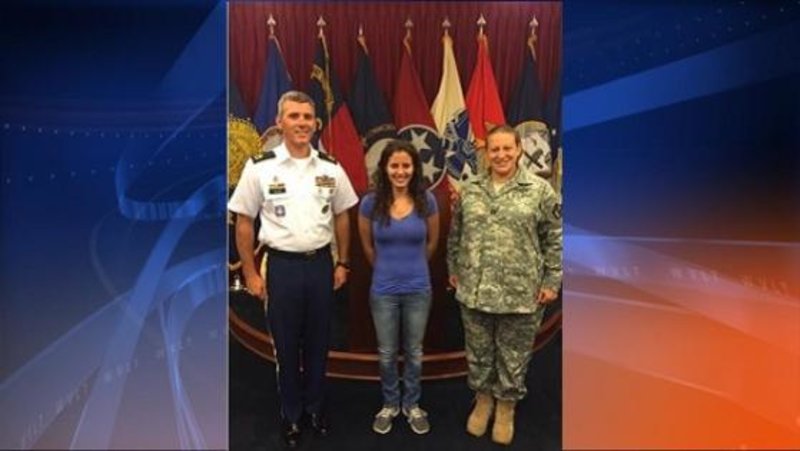 Posted from local8now.com
Posted in these groups:

SSG Warren Swan
Posted 5 y ago
If anyone can connect this one incident made by ONE woman as a precursor of what ALL women would do, they need to have their headspace and timing adjusted. For whatever reason she did it, she did more than embarrass herself and those that believed in her, but she embarrassed the Army, and for a very short time, the Army will have a scrape on the nose, but it will heal. Now the FB SuperVets and Longtabbers who've never been anywhere near Bragg will come out of the woodwork downing the multitude of accomplishments women have made over the decades based off ONE person....sorta how when ONE Muslim does something....the ENTIRE religion is to blame. She doesn't represent women as a whole, she represents herself, and her lack of belief in the Army, our values, and beliefs. I hope she gets processed out with an OTH if there are no other mitigating reasons, and the Army continues on with the integration of women in all facets of service.
(6)
Comment
(0)

Capt Tom Brown
5 y
She'll only be processed or disciplined if it's determined to be PC, not by any other standard. Women in combat is what's in nowadays and this will only be handled in whatever way it takes to make that philosophy look good and put a positive spin on it.
(2)
Reply
(0)

SGT (Join to see)
5 y
I agree completely and I think you may have explained it better than I did on how I view it, haha! So thank you!
(0)
Reply
(0)

SSG Warren Swan
5 y
Capt Tom Brown - Solid point, but at the same time with all the grumblings going on, I wouldn't be surprised if she IS made an example of to show that women WILL get the same treatment as men. Her actions while stupid as hell, could be the very catalist that makes folks think again. Equality should be Equality. So she should get what any male Soldier would. The one thing I'm having issues with is did she complete AIT? If not, what kind of punishment is there? I thought IET troops got a little more leeway being they're still learning vs someone who's made it to their first unit and screws up.
(1)
Reply
(0)

SMSgt (Join to see)
Posted 5 y ago
Folks go AWOL all the time, especially after going home for a awhile. I am not sure why this is a story. So what if she is female? The story should be "Army soldier goes AWOL." She may have been predisposed to go AWOL regardless of what her MOS was.
(3)
Comment
(0)

SGT (Join to see)
5 y
Media and it's a hot topic is the reasons I can think that this would even be given a second thought. The heading is what is going to get people riled up. I agree though and why I say it should be taught as an example of to look at the behavior and the person is a detail, but not the lesson.
(1)
Reply
(0)

SGT (Join to see)
5 y
Thank you for your comment MSG, I like to see Leadership like this. Gives me hope for the present and future Army.
(1)
Reply
(0)

MAJ Bill Darling
Posted 5 y ago
The "first woman" thing is a double-edged sword. Apparently we live and die by it.
(1)
Comment
(0)

SGT (Join to see)
5 y
I agree Sir, and it may take a few generations until there are others looking at this history to think that it was kinda "silly" that it took so long or be baffled by our way of thinking before. I think there are women out there who are going to blow this thing right out of the water and make it a "no-contest" kind of deal. But this is one more hurdle for them to have to jump while flipping off the rest of the world.
(2)
Reply
(0)

To your point, we have a very provincial way of looking at things. Myself, if I see someone from MA or NH in the news I have a weird sort of affinity for them, something that I don't have with race or sex. Then again, I'm a minor majority being a male Caucasian (although I've often been part of the majority sex-wise in organizations) so perhaps it's quite natural to downplay "firsts" if one of "my own" is not one of them.

Secondly, I'm of three minds when it comes to women's integration in the military, combat arms and otherwise. Either (1) disallow it like we did for 200 hundred years with no apparent detriment to our nation and quit apologizing, acknowledging that the military is not an equal opportunity employer. (2) Separate but equal. Allow men and women to serve equally but mostly separately so as to avoid all fraternization and cohesion issues. (3) A mixed force restricting women which both favors and inhibits them. Or (4) a completely androgynous approach in which women are integrated fully but treated no different then men.

We've seemed to have shifted from 3 to 4 over the last few years. While I don't give a full throated endorsement, I am in favor of it if we do in fact treat everyone the same--exactly the same. I agree, some women will perform admirably and exceed the standard, taking advantage of their talents is to the credit of the military. And when that happens we all will look back with some chagrin. But I think it must be 100%. Same clothing, same haircut, same promotion quotas, same housing, same acceptable language, same physical standards, same crude treatment, etc. Then and only then will those who are opposed to integration be fulling willing to accept women as interchangeable members of the armed forces, particularly the combat arms.
(1)
Reply
(0)
Show More Comments
Read This Next
RallyPoint Home