In the new age of 21st-century electronic warfare, law enforcement Marines will scour battlefields for the enemy’s cell phones and forensic intelligence, drones will help infantry Marines land ashore out of sight of the adversary, and radio operators will use frequencies to disrupt the enemy’s hacking abilities.

These innovations are part of a new command known as the 1st Marine Expeditionary Force’s Information Group that on July 6, made history at Camp Pendleton by becoming the first of its kind among the Corps’ Marine expeditionary forces. The transition from the 1st Marine Headquarters Group — which was in an administration and logistics role — is expected to go Marine Corps-wide, military officials said.

The group’s mission now is to win the war on the information battlefield and to decimate enemy capabilities in the electromagnetic spectrum, said Col. Bobbi Shea, who has overseen the shift and commanded the group for the last two years.

Shea, on Thursday, handed over command of the newly designated 1st MEF Information Group in a change of command ceremony aboard the base to Col. Dawn Alonso, who most recently served at Central Command and before that as commander for the 1st Intelligence Battalion.

At the ceremony, Shea, 51, was awarded the Legion of Merit for her leadership at 1st Marine Headquarters Group. Later on Thursday, she was promoted to Brigadier General, making her one of only two active-duty female generals in the Marine Corps. She will go to work at the Pentagon in the office of Secretary of Defense James Mattis, who commanded the 1st Marine Expeditionary Force at Camp Pendleton in 2006.


“In the past, the group’s primary mission has been moving and supporting Marines as they go forward to command forces in theater,” Shea said. “Now, we’re going to divest ourselves of the logistics mission and give it to a support battalion. Our headquarters will transform to a headquarters dedicated to enable our commanders to fight and win in the information environment.”

That will be accomplished, she said, by putting Marines trained in intelligence gathering and electronic warfare in closer contact with commanders and troops on the ground.

“This means degrading the enemy’s ability to exploit the information environment, capitalizing on social media and defending our abilities against cyber hacks we’ve become vulnerable to,” Shea said. “We want to make sure our commanders and units in the battlefield can take advantage of those networks and tools we provide them. We want to synchronize and integrate all those capabilities across the battle space.”

Shea pointed to such examples as the use of drones, law enforcement Marines picking up fingerprints or exploiting found cellphones on the battlefield, and imagery analysts gathering information from satellites.

Among the changes that are part of the transition are new Marine personnel, increased intelligence and cyberspace training, and a move to new facilities on the base.

While military officials called Thursday’s re-designation a first at the Marine Expeditionary Force level, an increased focus on new technology and cyber warfare threats are among the Corps’ broader changes, mandated by the Marine Corps Commandant to “modernize the force.”

In April, Camp Pendleton held the Advanced Technology Exercise 2017 — a collaborative technology expo conducted by the Department of the Navy. The inaugural event showcased dozens of emerging technologies to give Marines and sailors the upper hand in fighting the next generation of wars.

Marine Corps officials cited an urgency of the Marine Corps and Navy to move quickly in acquiring these technologies and to take advantage of tech-savy Marines joining the Corps. The key, they said, will be to combine the technologies into an effective arsenal and then switch them up enough to keep adversaries on their heels.

“Warfare is human first and foremost — what has changed is technology,” Lt. Col. Dan Schmitt, of the Marine Corps Warfighting Lab, said in April. “The difference is the human ability to combine the technology to create a dilemma for our adversary.” 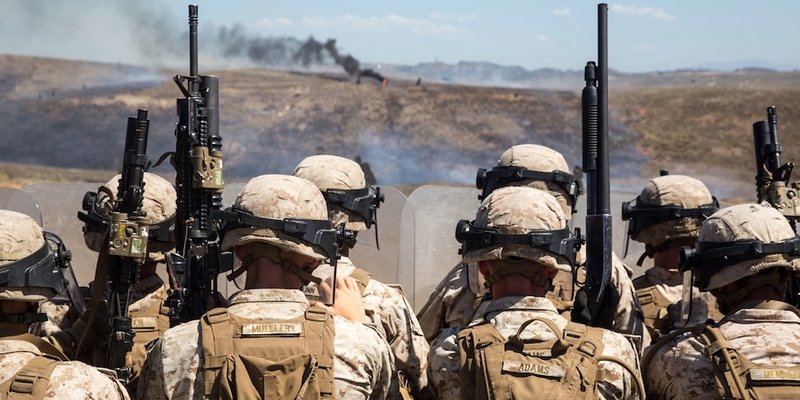