CW5 Jack Cardwell
366
8
4
5
5
0
National Guard Artwork: The 107th Observation Squadron, Michigan National Guard, one of 29 National Guard observation squadrons, was ordered into active Federal service on October 15, 1940. Along with 4,000 other national Guard Air Corps personnel, the men of the 107th expanded the rapidly-growing U.S. Army Air Forces. After taking part in antisubmarine patrols, the redesigned 107th Tactical Reconnaissance Squadron deployed to England in August 1942. They flew L-4, L-5, A-20 and Spitfire aircraft, before being equipped with the F-6A, the reconnaissance version of the P-51 Mustang. In December 1943, the 107th became the first operational photographic reconnaissance squadron in Northern Europe. In preparation for the Allied invasion, the squadron flew missions over the French coast and was awarded the Presidential Unit Citation for its efforts. Assigned to support the First U.S. Army during the Normandy Campaign, the 107th was the first reconnaissance unit to operate from French soil. The 107th achieved an illustrious record during World War II, a record which is proudly maintained by the 107th Tactical Fighter Squadron, Michigan Air National Guard. 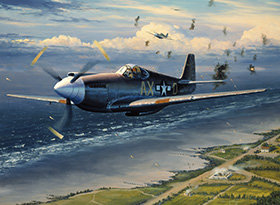