On or around this day in 1916, a mixed-breed terrier is born. The little dog would go on to become an American war hero—and the U.S. 1st Infantry Division’s mascot during World War I.
“Rags” might never have been found but for Private Jimmy Donovan. The young soldier had been asked to march in Paris’s 1918 Bastille Day parade. At the time, Rags was just a nameless and homeless little dog, roaming the streets of Paris.
Several stories are told about how Donovan and Rags found each other.
Perhaps Donovan was stumbling out of a Montemartre café after a post-parade celebration. He literally stumbled upon the dog, thinking it was a pile of rags. He was late for his curfew and used the dog as an excuse. No, of course he wasn’t going AWOL or breaking the rules! He was simply looking for the dog, the division’s mascot.
Another version of the story has Rags finding Donovan and following him back to base. Either way, dog and man found each other. And they developed a bond.
Early on, Donovan concluded that battlefields were not appropriate for a little homeless mutt. He tried to continue on without Rags, leaving him in a safer location, but Rags would have none of it. He followed Donovan and basically showed up on his doorstep.
“His choice seems to have been to be with Donovan wherever he was,” one of Rags’s biographers concludes, “regardless of the dangers or even of what Donovan would have preferred . . . .”
Rags went on to serve in multiple conflicts. Donovan taught him to run messages through gunfire—and he even taught Rags to salute! Rags figured out how to locate broken communication lines, and he learned to alert soldiers to incoming shells. He led medics to wounded soldiers.
A story is told that Rags once ended up in a surveillance balloon with reconnaissance soldiers. A German fighter plane arrived on the scene, forcing the soldiers to bail out. Reportedly, the German pilot saw that one of the parachuting men was clutching a barking dog. The German grinned, shook his head, and flew away without doing any further harm to the Americans.
Rags is best known for his final mission: He successfully delivered one last message, even as explosions tore up the earth around him. His gas mask was ripped off. He was wounded by shrapnel and blinded in one eye. Donovan was wounded, too. An order was given to treat the much-loved Rags just like a soldier, and man and dog were evacuated, together. Rags went everywhere that Donovan went—until it came time to board a ship headed home.
The commanding officer of that vessel did not want a dog on his ship! He ordered Rags left behind. Fortunately, another officer saw what was happening. He brought Rags aboard, hidden in his luggage.
Many members of the 1st Division worked together in those days, ensuring Rags’s safe (and secret) transport across the Atlantic. Against all odds, Rags and Donovan found themselves together again at a hospital in Illinois. Unfortunately, Donovan never recovered from his injuries. He passed away, leaving Rags behind.
Rags didn’t eat for a week. But the story doesn’t end there.
Major Raymond W. Hardenbergh and his family would adopt the war-wounded terrier. The story of Rags got out. He was given awards, and he marched in parades. A book was written about him. People left flags on his grave when he died.
“Throughout his life,” one of his biographers concludes, “Rags had proved of what durable stuff one little dog is made.”
P.S. The photo is of Rags with First Sergeant George E. Hickman. They are at Fort Hamilton in the 1920s. Hickman was possibly with Donovan when Donovan first found Rags. 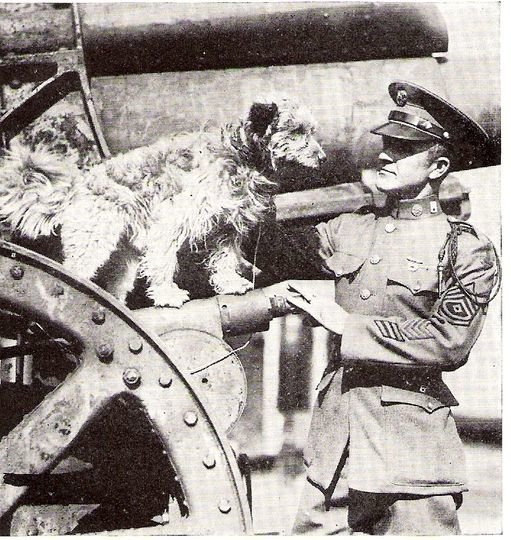