I have my own little theory on Combat Awards...and I hope it doesn't offend any of you Soldiers with its simplicity. It is how I feel. And I don't think I am alone.

First, every Soldier, in any Branch, deserves a medal for stepping up for their country. One of the few areas where I think a participation "trophy" is not only necessary but mandatory. As everyone on this thread knows...not many feel the call to Duty, and everyone of us is just one set of orders, or one disaster away from Combat. So I am all for that Participation Medal.
Validation from folks who know how difficult your job is, well that is what makes us Proud but not filled with pride...if you follow my thinking. Most Medals of Valor go to humble people. You have to really either know them, or get to know them well, to find out how (or how many) awards they got.

In every area of life there are competitors. Combat is, in a way, the toughest game - you win, or you die. I am not saying it is a game, I am saying it is the ultimate sacrifice you can make for the country or ideals you love- the ones you are willing to die for.

And the Medals I know of reflect that:
First level awards and Commendations are for being a good soldier for the training and duty you do in Garrison or at peace. Running the gamut from a Certificate of Achievement to Army Commendation Medals, to even a Bronze Star without the V for Valor. Those are important Awards...it means someone is paying attention to being ready for when they actually have to go to Combat.

Then there are Deployment Awards that show you went to a Combat Theater. Unit Awards, Deployment citations, all meant you went to where it was happening. Another soldier can read your Awards like a DD 214...and the patch on your arm tells them something too. You earned putting that patch on one shoulder and not another.

Now - we get to the beginning of how I see Awards for Valor/Combat.

First up, the CIB.
Yep, you have been under fire. You found out how you would react when the Sh*t hit the fan. That is the first moment of truth anyone faces in War. You faced it. Good on you.

Next up...Army Commendation Medal...under fire. This means you kept your cool and did some thinking while reacting. Someone saw you do something worth a compliment of the highest order. So they told someone.

Bronze Star with V for Valor.
This means the ordinary grunt, fighting in a firefight saw you do something they thought was crazy. Crazy brave, that is. They told you that there was no way in hell they would have done that! And they are glad you got that medal. (Remember all of these medals are earned!)

Okay, we step up a level of crazy to the Silver Star with V for Valor. This medal is given out to folks who even Bronze Star Winners stand in awe of. "Holy crap! Can you believe how crazy brave that soldier is? No way I would do that." And that is coming from someone already decorated for some crazy Sh*t.

Think about that posting of that female solder who won the Silver Star...and what she did to earn it. It is on RallyPoint- and when you read about her...you think: "Yep. Silver Star...no doubt about it!"

Now we are up to the Distinguished Service Cross...and at this point almost everyone who served is going: "Man oh man, that is bravery bordering on insanity. Crazy Brave. " Every other Medal Winner is thinking the same thing: "That is one brave Mother F*cker."

Then the Medal of Honor. This medal is often given out Posthumously. Because it is usually given to people who are rescuing someone winning one of the other medals. These are people who know they are probably not going to make it, but they save one, two, or many of their brothers or sisters as their final act.

HERO in all Caps.

The ultimate Sacrifice with full knowledge it would be their last. There aren't any words to describe these folks. In the middle of a battle they do something that hardened experienced Combat Vets Salute them with a heavy heart.

So there is my theory. The Crazy brave Sh*t just keeps escalating until everyone agrees that was some Crazy Brave Sh*t...way out of the ordinary. Those medals are for the living. A testimony to you, the one who won them. Your peers agree that belongs on your chest, or around your neck. Don't dismiss it, or their opinion of you, you earned it.

The ones who didn't come home...there isn't a Medal big enough for that. There never will be. All we can do is Honor their Memory. And every Medal winner I ever met, thought the ones that didn't come home were the real Heroes.

I don't care if you never got a single award...if you served your time and did your duty...you count. You stood up and took the Oath. God Bless you.

If you won a medal for a good job, or the Soldier's Medal for bravery while not under fire...that is one heck of an achievement. You earned it. Wear it with Pride.

Oh, and there is one more Medal...the Purple Heart. We all know what happened to get one of those, your blood or body parts are on a foreign soil somewhere. No need to explain what that one means.

And if you are one of those several levels of Bat Sh*t Crazy Brave Medal winners for Valor under Fire...it is small compensation for your courage and sacrifice. Wear it to both tell us it can be done, and to inspire those who might have to go.

I salute you all!

And that is my theory on Awards and Medals. 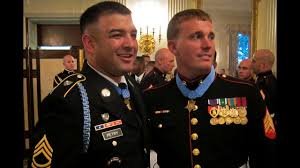 PO3 Bob McCord
Posted 1 mo ago
I think that pretty much sums up what most of us that have a few medals think about it Kevin. I remember my first one at 18 for being part of the Cuban missile blockade. I had forgotten that part about getting medals for doing my job. Which at that time wasn't much.
(8)
Comment
(0)
show previous comments

PO3 Bob McCord
1 mo
SGT Kevin Hughes - It wasn't until several years later that I actually realized how serious that was. We were within sight of the Cuban coast at times as we circled. If we had any danger it would have been by friendly fire, since we were basically in Castros Backyard ready to bring Marines ashore. Same thing with Nam. I'm finding out more about that war from guys here on RP than I did in three deployments there. In country we were kept in the dark and fed bullshit.
(1)
Reply
(0)

SGT Kevin Hughes
1 mo
PO3 Bob McCord - Some things don't change. I was on the Czech Border once- and on the other side was a Russian Tank Battalion - they had more than fifty tank Divisions on their side, we had ...well, us. It was the first time I realized that the Commander wasn't kidding when he said to try and slow them down for five minutes or so ...so he could radio out that the Sh*t had hit the fan. We wouldn't have stood a chance, we would have tried, but with those numbers, even if every single bullet or shell from our side hit something (or someone) on their side, we would be out of ammo before we would be out of targets.
(1)
Reply
(0)

SGT Kevin Hughes
1 mo
SGT Robert Pryor - You do know you are an excellent writer...don't you? A cleaner description of a down and dirty action is beyond the skill of even professional writers. Those of us who can read between the lines know how many scary moments are in there...and yes, we walked away. Someday...maybe...we won't walk in on the say so of folks who know they aren't at risk.
(1)
Reply
(0) 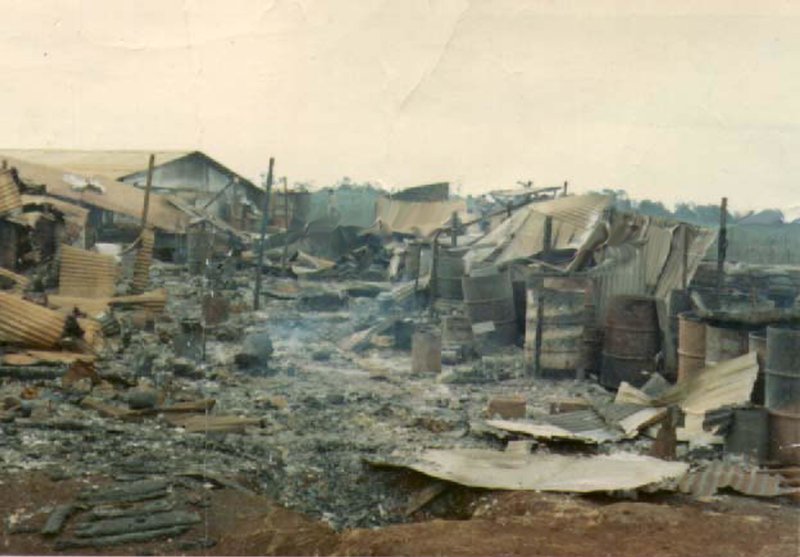 SGT Kevin Hughes - You are correct, we did indeed get our asses kicked to a fair thee well. This is what our camp looked like the morning after the incident in which I was deeply involved. My body didn't look much better.
(1)
Reply
(0)

SGT Kevin Hughes
1 mo
SGT Robert Pryor - I know this is going to sound strange, but I remember reading about this in an Article about Special Forces Base Camps. If I remember correctly, wasn't part of this an inside job? Where locals working for you during the day gave out maps of the bunkers, weapons and ammo caches? It is very very difficult for someone like me (Non Combat) to even grasp what you guys did...and survived. All we can do is thank you...and hope that level of Service isn't needed anymore. And that may be a pipe dream with Humanities Track Record.
(1)
Reply
(0)

SGT Robert Pryor
1 mo
SGT Kevin Hughes - There was a little of that, and yes, they knew our layout quite well. But fortunately, we had Cambodians in our camp that would snitch off the bad guys in a New York minute -- the lucky bad guys. The less fortunate ones would be found out by our Montagnards first. When the Yards discovered an infiltrator, that individual would have an unfortunate accident, such as accidentally shooting himself in the back of the head while cleaning his weapon. We knew enough to keep our mouths shut when that happened. The Montagnards could be your best friend in the whole world, but never betray one. And that's all I want to say about that. Well, other than I loved those little rascals and, fortunately for me, they loved me back.
(1)
Reply
(0)

SGT Steve McFarland
Posted 1 mo ago
A friend of mine is a retired Army Ranger Colonel who served in 'Nam, and many other places, and his 28 years of service are reflected by his numerous awards and medals. I fully support giving honors where honors are deserved.
(6)
Comment
(0)
Show More Comments
Read This Next
RallyPoint Home