LTC (Join to see)
1.9K
36
13
11
11
0
P.T. Barnum was right, there is a Sucker Born Every Minute. She is one of them on a Bernie Sanders' and the Canadian/American Green Party Sugar High. She drinks too much Climate Change Jolt Cola.

The Congresswoman stated that Carbon Taxes are nice but not enough. In Canada where I live, they already have a 20 cents a gallon carbon tax and it is supposed to go up every year for the next 5 years. Last month's Carbon Tax(which they call a 'Levy' LOL) was $39 on my Natural Gas Bill. They claim it is revenue neutral but I make too much money working for my courier company to get this back. It is a scam! It will only get worse. Don't buy into the Carbon Tax that Democrats want.

Ontario, Canada just elected a new Governor(Premier) because the ambitious Liberal Administration had spent a billion dollars to dismantle an almost-completed Natural Gas fired electric plant. The province set up green technology and overbuilt the system using wind, solar and renewables. It was mismanaged. The utility is called Hydro One. The people suffered and the electric bills were 3 times the national average. If her Duffleblog-sounding plan goes into affect, this will most likely happen.

Also, the people who don't want to work get subsidized? I have two druggie, high-school dropout step daughters in their 20s who became potheads and drunks as teenages from drug and alcohol abuse under our noses. Now they are on welfare doing nothing except being bums and worry about when is the next welfare check. We subsidize addicts? This will make people tune in, turn on and drop out with no hope of recovery.

When I hear the term 'New Deal' I think of the Great Depression of the 1930s. The New Deal was struck down by the Supreme Court. I believe that it is DOA if People can't fly at all.
Our military will be like those of Germany where they have 11 Operational Fighter-bombers and 1/3 of their Tanks don't work.

She tackles climate change like the Manhattan Project of World War 2.

I disagree that is the greatest existential threat. We will have to Rob from Peter to pay Paul.
Forget about the threats of Russia and no IMF treaty. Forget about NATO and issues with Russian threats near Poland, The Baltic NATO members and the Ukraine. Forget about the Chinese threatening Taiwan and our US Navy in the South China Sea. Forget about North Korea's Nuclear and Military threat to South Korea. Forget about Iran wanting to test missles and their clandestine Nuclear Program with the goal of destroying Israel. Forget about how American and Canadian druggies(like my step-daughters) foster the illicit drug demand to Central and South American Countries to fight a losing battle against the drug cartels dominating the region and helping foster some of the Caravan traffic coming to the US/Mexican border.

Ocasio's Golf-Delta fear is 'climate change'. It is funny that Dr. Judith Curry, the leader and torchbearer of Global Warming/Climate Change retired recently because she said that Science is now Political Science. She stated that if everyone stopped using Carbon tomorrow, the temperature would only decrease by .5 degrees centigrade for the next 50 years. The Earth is warming but we don't know why yet. We need to do more research but all the research is pointing towards man being at fault. No studies are funded looking at other reasons for the warming. The globlal warming is happening but those scientists who want to have other points of view are fired from the field. This new deal may be the biggest swindle in History. This New Deal could have been put in Duffleblog and nobody would question it 5 years ago.

By the way, we have improved technology on our own. We have Electric Cars that can beat a Car like the Dodge Hellcat. We now have technology where a 2-ton car and have a 300 horsepower V6 and get 30 miles per gallon. The improvements are coming on their own.
We don't have to have a crazy manhattan project like hers to see progress. 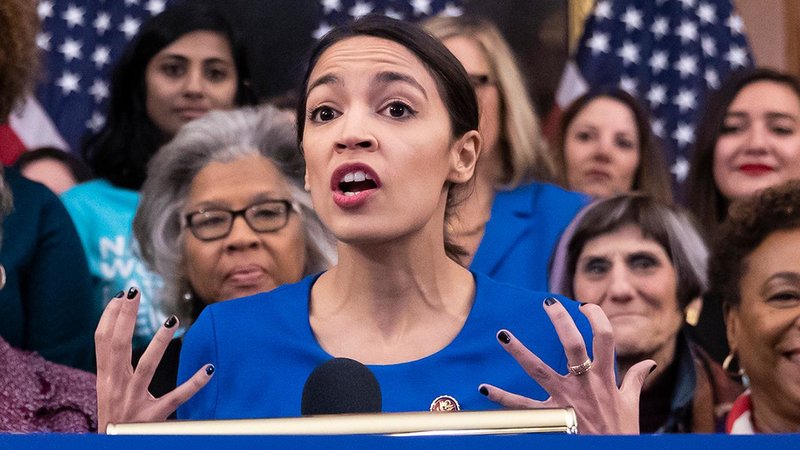 LTC David Brown
Edited >1 y ago
Posted >1 y ago
I think the mocking got to her, Occasional-Cortex pulled the green deal page. I think even she realizes how stupid the new green deal is! The renewable energy cost problems suffered by Ontario also occured in Georgetown Texas. So America be really stupid and think this garbage will work for you when it continuely fails elsewhere. Remember Obama’s green energy initiatives? Cost tax payers $ billions. I wish Obama had invested his own money instead of ours.
(6)
Comment
(0)

SMSgt Lawrence McCarter
>1 y
It also is going on in Massachusetts, our bill look like the Ontario bill except ours is monthly instead of Bi monthly like theirs is. This cap is also called Green Initiative instead of just calling it the rip off and theft from the consumers it actually is ! I'm using less electricity and paying more than double what I used to a years ago. What is going on in both Canada and the US is a complete disgrace and way out of control !
(0)
Reply
(0)

LTC (Join to see)
Posted >1 y ago
Sounds like your daughters are well prepared and experienced to become Democrat politicians. I’d recommend sending them to any of our Blue metropolitan areas to start their promising careers. Just have them start at any local bar and soon they to will be experts in all fields of study.
(5)
Comment
(0)

SSG (Join to see)
Posted >1 y ago
Hell if you tried to implement what she wanted we would need the GDP of the entire planet just for the U.S. plus some of the other stuff she listed. Do away with air travel, provide aid to those who don't want to work, how is that going to work. 90% of the country would end up on that list because why would you work. All the rich people would move to some tropical paradise because she would tax them into poverty. She is a walking mouth piece but her brain seems to be functioning on a part time basis.
(4)
Comment
(0)
Show More Comments
Read This Next
RallyPoint Home