Lt Col Charlie Brown
637
69
12
13
13
0
While close watchers of defense budgets know the Democratic Party has long harbored a deep divide on nuclear weapons, there’s been much gnashing of teeth by proponents of the triad modernization, fearful that a President Biden might mean trouble for the nuclear enterprise’s need to modernize.

The RDT&E 2022 request for the Ground Based Strategic Deterrent is $2.6 billion, while the LRSO request is $609 million. Those are up from $1.4 billion appropriated last year for GBSD and $385 million for LRSO. In addition, the crucial new Nuclear Command and Control (NC3) system rises from $388 million appropriated last year to a request of $436 million.
The most shocking news to those who don’t follow the Air Force closely is something our colleague John Tirpak first reported: the retirement of more than 200 so-called legacy aircraft (old ones that can still fly) to help sink money into new generations of advanced weapons, such as Next Generation Air Dominance. The 2022 budget request is $1.52 billion for NGAD, up from $902 million appropriated in 2021. The money saved from retiring those older aircraft, an estimated $1.3 billion, will be hard to come by. Congress hates “losing” existing aircraft at bases in their districts, especially in any numbers. 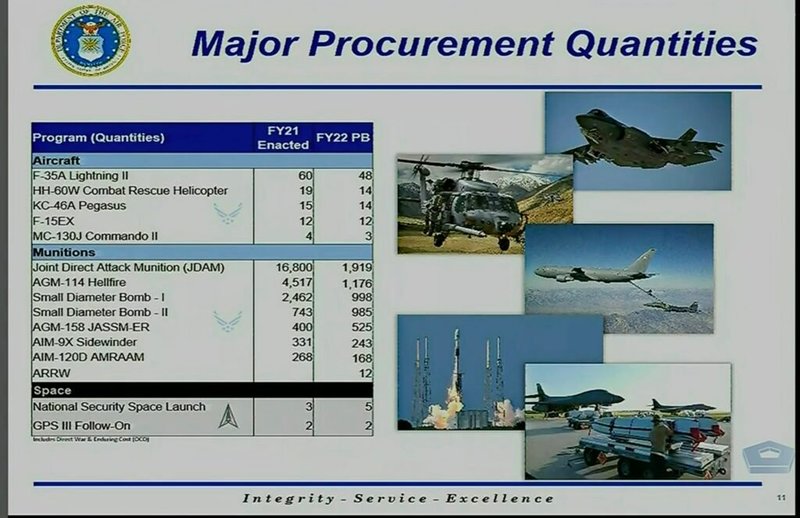 Maj Robert Thornton
Posted 1 mo ago
Sometimes I wonder who's side the Air Force leadership is on. Let's see; get rid of some more of those pesky A-10's, only the ground forces love them anyway; aah yes, Let's get rid of some of those old, but very useful KC-135's and KC-10's. We can replace them with an ultra expensive KC-46, which still can't do the refueling missions it was made for; and while we're at it, let's divest ourselves of some older F-15's and F-16's to make way for the F-35, an aircraft that is way to expensive to operate. Yep makes perfect sense!
(10)
Comment
(0)

A1C Mike Allen
Posted 1 mo ago
Is the USAF disposing of flyable and usable aircraft so it can use the money replacement planes?
That seems like it is leaving a gap in the US defenses!
How long will it take to replace those aircraft??
(10)
Comment
(0)