What was almost a military career ender for you..... but wasn't? 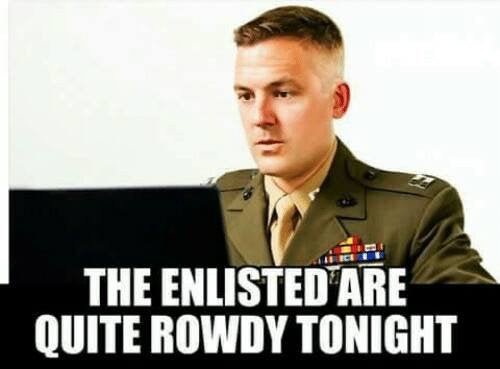 SFC Charles McVey Sr.
2 mo
I refuse to answer on the grounds it will intimidate and I just might still end up facing a Courts Martial. Lets just say at one point in time I was a very, very, very naughty boy.
(2)
Reply
(0)

SSG (Join to see)
Edited 2 mo ago
Posted 3 mo ago
This is a long story so I'll keep it short and leave out any names/units/dates.
We're staying at a small airfield and have billets next door. We've never spent time in this place but we were told the bar scene was awesome. We were explicitly told no one can leave and no drinking. We wait until everyone is asleep, sneak out the windows and a group of us head out.
So we go to the bars. One dollar drinks, two dollar mixed well drinks, drunk college kids, etc. It's getting into the early hours of morning so it's time to head home. Things are fine until we get pulled over for speeding in a 15 pax van with about a half dozen junior enlisted. Somehow they let us go and miraculously slip back into our racks before first formation. Somehow no one found out and no one was UCMJ'ed. ;)
(48)
Comment
(0)
show previous comments

1SG Steven Malkowski
18 d
SSG John Potter - I spent 6 years enlisted (Active and NG), went to ocs and was commissioned for 10 years and made Captain. When the Clinton drawdown happened in the early 90's, my unit was abolished and I dodn't have a slot. Also my mom died unexpectedly so I had to go in the IRR so I could take care of my elderly father. I had a five year break fron 93-98. When I went back in, I had fallen behind in my officer education and went back in as an Staff Sergeant. I was only going to do 4 more years to get my twenty year pension. I was going to stay a SSG so as not to hold anyone else up from promotion (I knew I would retire at Captain pay) I got my 20 year letter 15 months after 9/11 in December 2002. I decided to stay in for a while and went on the promotion lists, because I figured if I got deployed, it would be better with more rank. I had tons of promotion points, TIG/TIS so I immediately made SFC and two years later 1SG. I had one deployment and retired in 2010 with thirty years service. I wish I could do it again.
(2)
Reply
(0)

SSgt Paul Murray
15 d
This was quite common when I was in the USAF 1965-1972. When I left this particular air base, the base ops Captain (Temp Major) was riffed. He had the choice of leaving (which most officers took the choice of being reassigned) but stayed and when I came back, he was a Sgt and I outranked him as a SSgt. He later made SSgt and then retired as a Major. I never could understand the riff process.
(0)
Reply
(0)

SSgt (Join to see)
Posted 3 mo ago
Capt Gregory Prickett … what’s the statute of limitations on stupidity in the military?

fedsoc.org is using a security service for protection against online attacks. The service requires full cookie support in order to view this website.

A naval appeals court found that a retiree was properly court-martialed for a crime committed after he had left active duty.

SSG (Join to see)
1 mo
TSgt Charles Jones so I stand by my previous statement. There are still statute of limitations on most non-person crimes. Once the SoL passes, you cannot be prosecuted. Regardless of status.

Person crimes like murder and rape currently have no SoL, but may depending on when it was committed.
(0)
Reply
(0)

TSgt Charles Jones
1 mo
You are correct... what I was referring to is the latest push to activate people who committed crimes while not active and activation as a means to charge under the UCMJ...
(0)
Reply
(0)
Show More Comments
Read This Next
RallyPoint Home