"On this date in 1664, Maryland passed the first Anti amalgamation law. This law was intended to prevent marriages between Black men and English women. It was an early American effort to avoid the intersectionality of gender, color, class, religious identity, nationality and more.

The Governor of the state at the time was Sir William Berkeley. Interracial marriage was a fairly common practice during the colonial era among white indentured servants and black slaves as well as in more aristocratic circles. Subsequently, similar laws were passed in Virginia 1691, Massachusetts 1705, North Carolina 1715, South Carolina 1717, Delaware 1721 and Pennsylvania in 1725. Intermarriage bans were lifted during Reconstruction in the early 1870's, but by the end of the decade mixed marriages were declared void. It wasn't until the 1950's and 1960's that all of these laws were lifted again.

However in October, 1958, a Virginia grand jury indicted Mildred Loving and her white husband for violating the state's anti-miscegenation laws. Each pleaded guilty and received a one-year sentence. Their sentences were suspended providing they leave Virginia and not return for twenty-five years. The Loving's appealed that decision to the U. S. Supreme court in Loving v. Virginia 1967. and won. The Supreme Court struck down the Virginia law and similar laws in fifteen other states at the time.

Statistics show that in 1991, there were 231,000 blacks married to whites, about 0.4 per cent of the total number of married couples in America. Still according to the 1994 National Health and Social Life Survey, 97% of black women are likely to choose a partner of the same race. Many black women-the culture bearers-oppose the idea of interracial marriage, opting instead for racial strength and unity through the stabilization of the Black family." 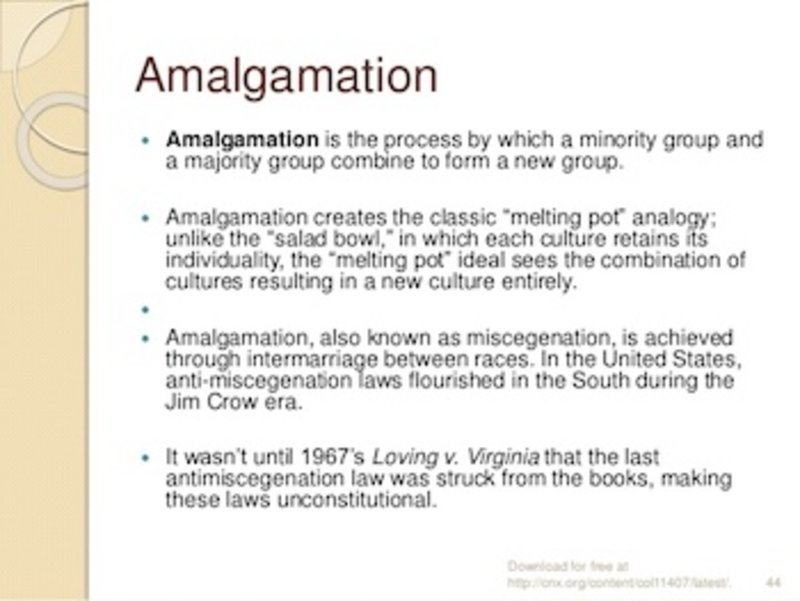 Posted from aaregistry.org
Posted in these groups:

1SG (Join to see)
Posted 9 mo ago
Well, as a white man married to black woman, let me be the first on this thread to declare that these bans are bullshit. I can't see what possible harm could be done to society by one of these marriages. Not in 1664 (really?), not in 1870, not in 1958, and not in 1967.
What and who does it threaten?
I think busybodies need to find a better hobby.
(6)
Comment
(0)

SPC Angela Burnham
9 mo
I agree. These were the same types of people who opposed legalizing gay marriage. For those who don't believe me, the number one reason cited for anti-miscegenation laws in the United States was the bible.

Exodus 34:12-16
"Watch yourself that you make no covenant with the inhabitants of the land into which you are going, or it will become a snare in your midst."

Acts 17:26
"And He made from one man every nation of mankind to live on all the face of the earth, having determined their appointed times and the boundaries of their habitation."

Deuteronomy 7:3
“You shall not intermarry with them, giving your daughters to their sons or taking their daughters for your sons, for they would turn away your sons from following me, to serve other gods.”

It's beyond stupid that people would even try to read that deep into it, but when you want to justify hate, holy books are the number one resource for cherry picking one liners if you're willing to ignore the rest of their contents.
(1)
Reply
(0)