"Jews occupied a precarious position in medieval English society. They performed an invaluable service as moneylenders, a role denied to Christians on religious grounds, but this made them the subject of widespread resentment and exposed them to exploitation. The theologian William de Montibus (1140–1213) represented this view when he characterised Jews as ‘sponges of the king. They are blood-suckers of Christian purses, by whose robbery kings despoil and deprive poor men of their goods’. In 1210 King John ordered that Jews be arrested, and he commanded that they place their wealth at his disposal; two clauses of Magna Carta subsequently dealt with debts owed to Jews by under-age heirs and widows. These 13th-century charters record transactions with Jewish moneylenders. The majority are written solely in Hebrew but one, in which Isaac of Southwark renounces his claim to a debt, contains additional words in Latin (Harley Charter 43 A 68)."

Posted from bl.uk
Posted in these groups: 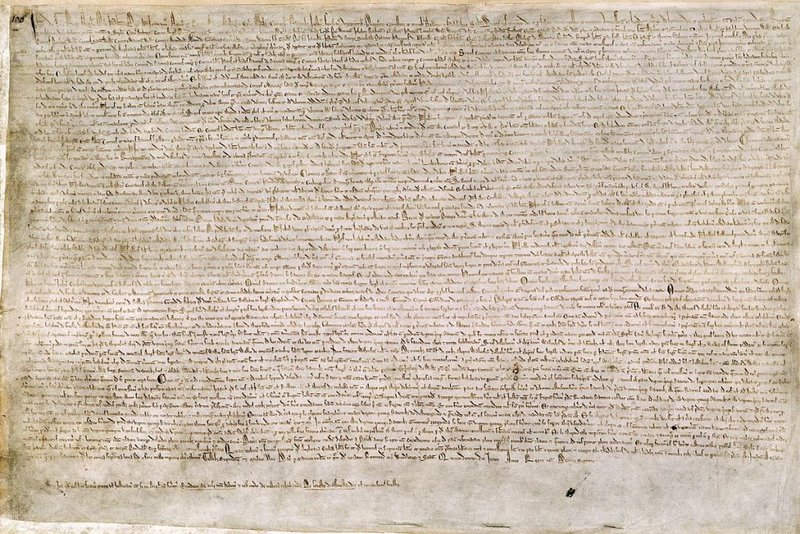 Jews in England | Stuff That I Find Interesting

Thank you my friend SGT (Join to see) for making us aware that on November 1, 1210, King John Lackland of England began imprisoning Jews.

Jews in England | Stuff That I Find Interesting
https://www.youtube.com/watch?v=4Ki5X7Tz01Y


Background from {[https://www.timesofisrael.com/the-magna-cartas-very-jewish-underpinnings/]}
The Magna Carta’s very Jewish underpinnings
800 years after its signing, a look at the Jewish clauses in the document widely praised as the foundation for enshrining civil liberties
By AMANDA BORSCHEL-DAN
15 June 2015

Things were coming to a head when the Magna Carta was signed by King John 800 years ago on June 15, 1215, in Runnymede near Windsor.
And as the rebellious barons and recalcitrant king brokered a short-lasting peace — via a pact hailed as a founding legal document enshrining human rights, civil liberties and the use of authority — Jewish history gained another footnote.
It was a time when Jewish moneylenders could be wealthier than the king of England, since, thanks to the iron grip of the Catholic Church’s usury laws, Jews were the only avenue for loans — much-needed advancements the king’s noblemen required to go off to war.
But it was also a period when lands were forfeited upon default, and when poor orphans and widows were beholden to repay the loans of their deceased male heads of household.

The era was, in short, ripe for banking regulations.

However, John drew the ire of noblemen and Jew alike through his unprecedentedly heavy taxation. Ingeniously, as the noblemen increasingly turned to the Jewish moneylenders for funds, upon their defaulting of the loans, the king received the parcels of land used as collateral.
The Magna Carta was an attempt by the Archbishop of Canterbury to broker peace between the king and the barons through a legal document that curtailed the king’s powers.
As recorded in an informative February Times of Israel blog post, Clause 10 states, “If anyone who has borrowed money from the Jews any sum, great or small, die before the loan be repaid, the debt shall not bear interest so long as the heir is under-aged, whosoever tenant he be and if that debt fall into Our hand We will not take anything except the principal sum contained in the agreement.”

‘If anyone die owing a debt to the Jews, his wife shall have her dower and pay nothing of that debt’

Clause 11 states, “And if anyone die owing a debt to the Jews, his wife shall have her dower and pay nothing of that debt; if the dead man leave children under age, they shall be provided with necessaries in keeping with the holding of the deceased and the debt shall be paid out of the revenue, reserving however service due to overlords; and debts owing to others than Jews shall be dealt with in the same manner.”
As Romain in the Jewish Chronicle wrote, “The fact that these were listed as numbers 10 and 11 among the 62 [sic] clauses indicates the importance of the consequences of Jewish loans to the barons.”
Additionally, a writer in The Occidental Observer found, “What is interesting about clauses 10 and 11 is how prosaic and matter of fact they are… There are no diabolical fantasies of blood libel or any religious content at all. It is just business that is at issue, but underlying the dry prose is anger at Jewish moneylending.”
However, only the original 1215 Magna Carta directly refers to Jews. The later 1216, 1217, 1225 and later versions do not.
Unfortunately this “omission” is likely due more to the Jews’ waning wealth than to any new humanitarian interest. Between 1219 and 1272, the Jews were taxed 49 times for enormous sums.
In 1274, Edward I codified the “Statute of Jewry,” which stated, “Each Jew, after he is seven years old, shall wear a distinguishing mark on his outer garment, that is to say, in the form of two Tables joined, of yellow felt of the length of six inches and of the breadth of three inches.”
By 1287 in the duchy of Gascony, the destitute king of England, King Edward I, tested out a brilliant venture capital scheme: expel Jews and assume ownership of their assets. Meeting success, a wildly popular Edict of Expulsion was written in 1290, and the Jewish community was banished from England.
Some 350 years later, the Puritan Lord Protector of England Oliver Cromwell began to woo wealthy Dutch Jews — and their trade interests — to England."

PVT Mark Zehner
Posted 3 mo ago
The Jewish people have had such a difficult existence!
(4)
Comment
(0)
Show More Comments
Read This Next
RallyPoint Home