"James Meredith
Integrating the University of Mississippi
After high school, Meredith spent nine years in the United States Air Force before enrolling in Jackson State College—an all-black school—in Mississippi. In 1961, he applied to the all-white University of Mississippi. He was initially accepted, but his admission was later withdrawn when the registrar discovered his race. Since all public educational institutions had been ordered to desegregate by this time, following 1954's Brown v. Board of Education ruling, Meredith filed a suit alleging discrimination. Although the state courts ruled against him, the case made its way to the U.S. Supreme Court, which ruled in his favor.

When Meredith arrived at the university to register for classes on September 20, 1962, he found the entrance blocked. Rioting soon erupted, and Attorney General Robert Kennedy sent 500 U.S. Marshals to the scene. Additionally, President John F. Kennedy sent military police, troops from the Mississippi National Guard and officials from the U.S. Border Patrol to keep the peace. On October 1, 1962, Meredith became the first black student to enroll at the University of Mississippi.

In 1963, Meredith graduated with a degree in political science. He wrote an account of his experience, titled Three Years in Mississippi, which was published in 1966. That June, he was in Memphis on a solo march through the South to encourage black voters when he was shot and wounded by a white unemployed hardware clerk named Aubrey James Norvell, who was apprehended and sentenced to five years in prison. (He would ultimately serve just 18 months.) However, Meredith eventually recovered from his injuries and went on to receive a master's degree in economics from the University of Ibadan in Nigeria and a law degree from Columbia University in 1968.

Political Activities
Becoming active in the Republican Party, in 1967 Meredith unsuccessfully ran for Adam Clayton Powell Jr.'s seat in the U.S. House of Representatives. In 1972, he ran for a seat in the Senate, losing to Democratic incumbent James Eastland. Despite these losses, Meredith remained active in politics and from 1989 to 1991 served as a domestic adviser Jesse Helms, despite the senator's poor history regarding civil rights.

Personal Life
In 1956, Meredith married Mary June Wiggins while serving in the U.S. military. They would have three sons before Mary died in 1979. The following year, Meredith married Judy Alsobrooks, with whom he has one son and a daughter. They live in Jackson, Mississippi.

In recent years, Meredith has continued to be active in civil rights and education issues, particularly through his nonprofit organization, the Meredith Institute. He has also authored several books, including the children's book Will Wadsworth's Train to Nowhere (2010) and the memoir A Mission from God (2012)." 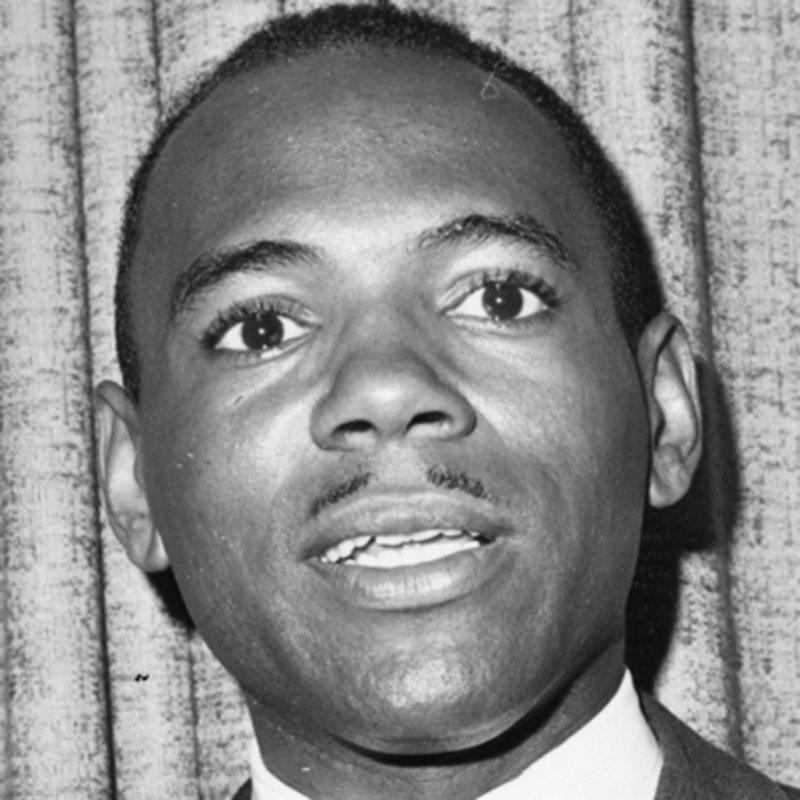 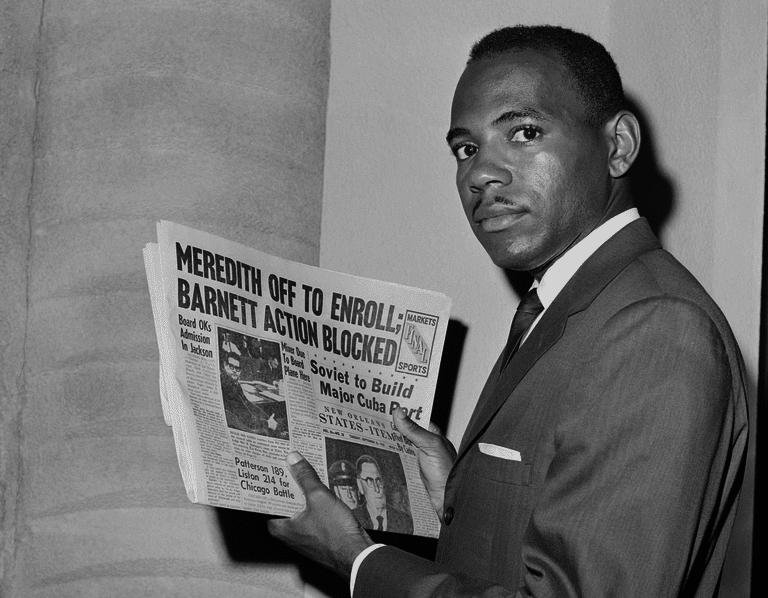 Thank you, my friend SGT (Join to see) for reminding us that on September 20, 1962, USAF veteran James Meredith arrived at the University of Mississippi to register for classes. Deplorably he was blocked from entering classes.

Deadly Riots at Ol' Miss
"35 US Marshalls are shot in attempt to admit the first black at the university"
https://www.youtube.com/watch?v=HVqvCuOwpZU


Background from thoughtco.com/james-meredith-american-civil-rights-4588489
by Robert Longley Updated March 14, 2019
James Meredith is an African American political activist and Air Force veteran who rose to prominence during the U.S. Civil Rights Movement by becoming the first black student admitted to the previously segregated University of Mississippi (“Ole Miss”).

The U.S. Supreme Court ordered the university to integrate the school, but Mississippi state police initially blocked Meredith’s entrance. After campus riots occurred, leaving two people dead, Meredith was allowed to enter the university under the protection of U.S. federal marshals and military troops. Though the events at Ole Miss forever entrenched him as a major civil rights figure, Meredith has expressed opposition to the concept of race-based civil rights.

Early Life and Education
James Meredith was born on June 25, 1933, in Kosciusko, Mississippi, to Roxie (Patterson) and Moses Meredith. He completed 11th grade at Attala County, Mississippi Training School, which was racially segregated under the state's Jim Crow laws. In 1951, he finished high school at Gibbs High School in St. Petersburg, Florida. Days after graduating, Meredith joined the U.S. Air Force, serving from 1951 through 1960.

After honorably separating from the Air Force, Meredith attended and excelled at traditionally black Jackson State College until 1962. He then decided to apply to the strictly segregated University of Mississippi, stating at the time, “I am familiar with the probable difficulties involved in such a move as I am undertaking and I am fully prepared to pursue it all the way to a degree from the University of Mississippi.”

Denied Admission
Inspired by President John F. Kennedy’s 1961 inaugural address, Meredith’s stated goal in applying to Ole Miss was to persuade the Kennedy administration to enforce civil rights for African Americans. Despite the U.S. Supreme Court’s historic 1954 ruling in the civil rights case of Brown v. Board of Education that segregation of public schools was unconstitutional, the university persisted in admitting white students only.

After being denied admission twice, Meredith filed suit in U.S. District Court with the support of Medgar Evers, who was then head of the Mississippi chapter of the NAACP. The suit alleged that the university had rejected him solely because of he was African American. After several hearings and appeals, the Fifth U.S. Circuit Court of Appeals ruled that Meredith had a constitutional right to be admitted to the state-supported university. Mississippi immediately appealed the ruling to the U.S. Supreme Court.

The Ole Miss Riot
On September 10, 1962, the Supreme Court ruled that the University of Mississippi had to admit African American students. In clear defiance of the Supreme Court’s ruling, Mississippi governor Ross Barnett, on September 26, ordered state police to prevent Meredith from setting foot on the school’s campus. “No school will be integrated in Mississippi while I am your governor,” he proclaimed.

On the evening of September 30, riots on the University of Mississippi campus erupted over Meredith’s enrollment. During the overnight violence, two people died from gunshot wounds, and white protestors pelted federal marshals with bricks and small arms fire. Several cars were set on fire and university property was severely damaged.

By sunrise on October 1, 1962, federal troops had regained control of the campus, and escorted by armed federal marshals, James Meredith became the first African American to attend the University of Mississippi.

Integration at the University of Mississippi
Though he suffered constant harassment and rejection by fellow students, he persisted, and went on to graduate with a degree in political science on August 18, 1963. Today, Meredith’s admission is considered one of the pivotal moments in the American Civil Rights Movement.

In 2002, Meredith spoke of his efforts to integrate Ole Miss. “I was engaged in a war. I considered myself engaged in a war from Day One,” he said in an interview with CNN. “And my objective was to force the federal government—the Kennedy administration at that time—into a position where they would have to use the United States military force to enforce my rights as a citizen.”

March Against Fear, 1966
On June 6, 1966, Meredith began a one-man, 220-mile “March Against Fear” from Memphis, Tennessee, to Jackson, Mississippi. Meredith told reporters that his intent was “to challenge the all-pervasive overriding fear” that black Mississippians still felt when trying to register to vote, even after the enactment of the Voting Rights Act of 1965. Asking only individual black citizens to join him, Meredith publicly rejected the involvement of the major civil rights organizations.

However, when Meredith was shot and wounded by a white gunman on the second day of the journey leaders and members of the Southern Christian Leadership Conference (SCLC), the Congress of Racial Equality (CORE) and the Student Nonviolent Coordinating Committee (SNCC) all joined the march. Meredith recovered and rejoined the march just before some 15,000 marchers entered Jackson on June 26. During the trek, more than 4,000 black Mississippians registered to vote. Today, Mississippi has one of the nation’s highest rates of black voter registration and voting.

Meredith’s Political Views
Perhaps surprisingly, Meredith never wanted to be identified as part of the Civil Rights Movement and expressed disdain for the concept of racially-based civil rights.
As a lifelong moderate Republican, Meredith felt he was fighting for the same constitutional rights of all American citizen, regardless of their race. Of civil rights, he once stated, “Nothing could be more insulting to me than the concept of civil rights. It means perpetual second-class citizenship for me and my kind.”
Of his 1966 “March Against Fear,” Meredith recalled, “I got shot, and that allowed the movement protest thing to take over then and do their thing.”
In 1967, Meredith supported avowed segregationist Ross Barnett in his failed run for reelection as governor of Mississippi, and in 1991, he backed former Ku Klux Klan leader David Duke in his close but unsuccessful race for governor of Louisiana.

Family Life
Meredith married his first wife, Mary June Wiggins, in 1956. They lived in Gary, Indiana and had three sons: James, John and Joseph Howard Meredith. Mary June died in 1979. In 1982, Meredith married Judy Alsobrooks in Jackson, Mississippi. They have one daughter together, Jessica Howard Meredith.
After graduating from Ole Miss, Meredith continued his education in political science, at the University of Ibadan in Nigeria. Returning to the U.S. in 1965, he went on to earn a law degree from Columbia University in 1968.
When his third son, Joseph, graduated at the top of his class from the University of Mississippi in 2002, after having also earned a degree from Harvard University, James Meredith stated, “I think there's no better proof that white supremacy was wrong than not only to have my son graduate but to graduate as the most outstanding graduate of the school. That, I think, vindicates my whole life.”

Capt Dwayne Conyers
Posted 9 mo ago
Sad history that fortunately was changed and hopefully will never be repeated. America for all Americans!
(5)
Comment
(0)