Invite a Friend, tell a friend, and share with your friends!

Get connected with Veterans, Service Members, First Responders, and Caretakers every Tuesday!

David was an old man, and he hadn't officially named his successor...yet. He had survived one coup attempt by his son, Absalom, who had fulfilled the prophesy in 2 Samuel 12:11 by raping David's concubines in public while David was on the run. Even David's most trusted general, Joab, had participated in the coup, so David's inner-circle was rapidly shrinking. Like many other great leaders, David had spent so much of his time through the years being the king and a great warrior that he had forgotten that he was also a husband and father. His wives were little more than bedroom play-things who were left to fend for themselves when it came to raising their children, and it showed. Family dysfunction and rivalries were rampant in David's family, and were the cause of much of his heartache as he got older. David's moral failings and failures as a father had come back to bite him - hard. His sons, Amnon and Absalom, followed their father's example of adultery (2 Samuel 13:1-20) and murder (2 Samuel 13:23-33). Sound familiar?

As 1 Kings opens, Adonijah, David's oldest son, tries to usurp his father's throne by gathering a entourage and declaring himself king. He might have gotten away with it had Nathan the prophet not gotten wind of it and blown the whistle, because only David had the authority to name his successor. After an appeal by Bathsheba, and a conference with Nathan, David made a proclamation that Solomon would be his successor, and ordered his anointing and coronation. Having Solomon ride David's own mule was a public symbol of David's approval.

While Adonijah was off partying and celebrating his "coronation" with his entourage, Solomon was being anointed by Zadok the priest and Nathan the prophet, and it brought Adonijah into conflict with Solomon. We will see next week how Solomon deals with Adonijah.

Tune in TONIGHT for "Healing Through Faith" session with Veteran Steve McFarland for a discussion about ""David's Final Curtain - Solomon Crowned!"

Dial in 5-10 minutes early to test your communications!

Veteran SGT Steve McFarland will be the Host TONIGHT and is inviting you to a RingCentral meeting. 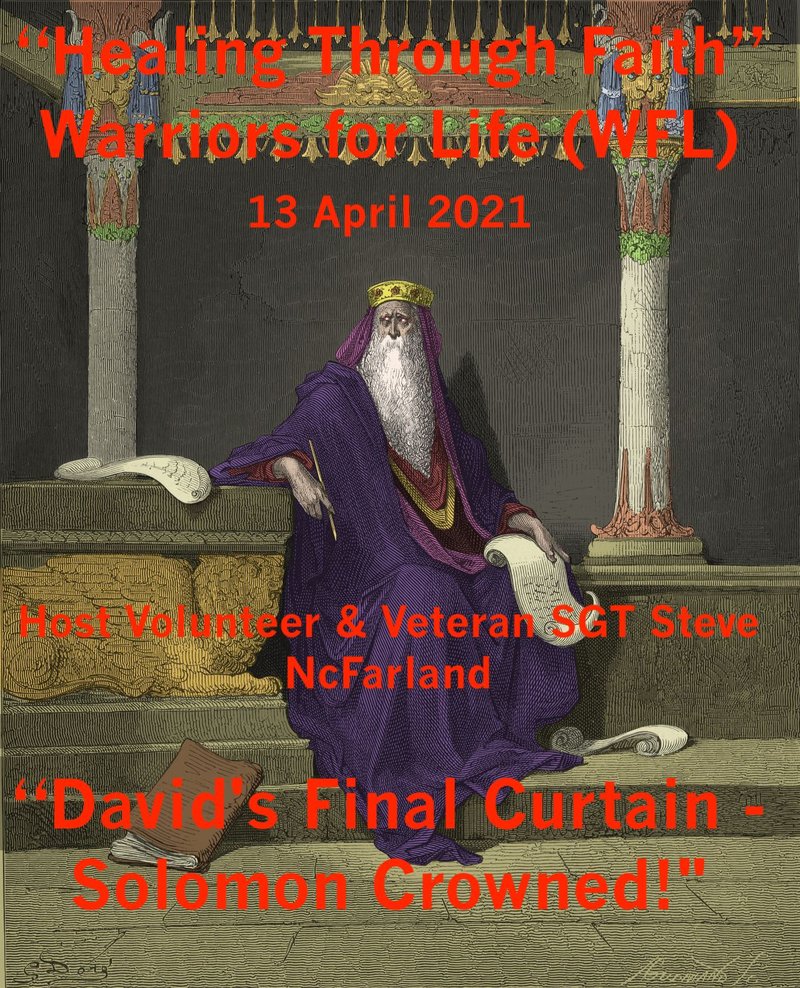 LTC Stephen F.
Posted 2 mo ago
Thank you my friend COL Mikel J. Burroughs for making us aware that our U.S. Army veteran NCO friend and brother-in-Christ SGT Steve McFarland will be hosting the Tuesday evening for "Healing Through Faith" addition of Warriors for Life (WFL) Online Peer Support Group on Tuesday, April 13, 2021.
The topic "David's Final Curtain - Solomon Crowned!" reminds me of the torment David went through at the rebellion and treachery of many of his sons. Solomon remained faithful and by God's grace he became King of Israel. Sadly but expected Israel disintegrated after his death - Judah and Benjamin stayed faithful in general while the other tribes formed Samaria and were conquered many times and scattered among the nations as captives.
(9)
Comment
(0)