Weapons of war have no place in our communities. When I was a Senator, I took on the NRA and secured a 10-year ban on assault weapons — and, as president, I’ll ban these weapons again.

At the time, the NRA laughed it off:

Joe and his supporters fear-monger using words like “assault weapons” to describe America’s most popular home defense rifle — the AR-15 — or “AR-14” to Joe.

Joe — We’ll say it real slow: Come and Take it.

The NRA and its more than five million gun owners aren’t laughing anymore. With Biden about to take the reins of the federal government following his fraudulent election and the acquiescence of the Supreme Court and both houses of Congress, he — or more accurately his running-mate, Kamala Harris, who will shortly be the real president — plans on banning them again, only this time for good.

He, or more accurately, his handlers, has explained just how. On his campaign website, under the heading “The Biden Plan to end our gun Violence Epidemic,” he spells out what he and Harris plan to do (summarized below):

Repeal the Protection of Lawful Commerce in Arms Act, which will allow radicals to sue gun manufacturers into bankruptcy;
Institute a mandatory buy-back program for all AR-15s;
Limit the purchase of those firearms not deemed to be “assault rifles” to one per purchaser per month;
Force those who have become prohibited from possessing firearms to relinquish their firearms;
Require all firearms sold from here on out to be “smart guns”;
Require all firearms owners to lock them away in their homes;
Prohibit the manufacture of “ghost guns,” i.e., 3D-printed firearms;
“Restructure” the ATF “to most effectively enforce our gun laws”; and
Regulate possession of “assault weapons” under the National Firearms Act (NFA), under which act owners will be forced to pay huge “license” fees to keep possession of them.

Missing from the Biden/Harris attack on the Second Amendment is precisely how they plan to do all this.

There are an estimated 600 million firearms owned by an estimated 120 million American citizens. There is at least one firearm in more than 50 million households.

Those numbers are a rough estimate because many firearms are passed on to new generations of family members without papers when an owner dies. It misses the number purchased underground in the free market — the so-called “black market” — which remains firmly in place and growing despite the government’s zealous attempts to quash it. It misses the “ghost guns” being turned out by backyard operators using software available for free on the Internet, which has become a virtual cottage industry, operating silently and invisibly.

German dictator Adolph Hitler had a similar situation with Switzerland. He started planning the invasion of that sovereign nation on June 15, 1940, when France surrendered. Called Operation Tannenbaum, the invasion involved 21 German divisions and 15 Italian divisions totaling some 500,000 soldiers. But, according to historians, “for reasons that are still uncertain,” Hitler never ordered the invasion.

Many reasons are offered, such as the country’s difficult terrain and the fact that German and Italian military resources would shortly be desperately needed elsewhere.

But perhaps another reason is that Switzerland required all men between the ages of 18 and 34 to be “fit for service” by training them and providing them with weapons to defend the country. The Swiss philosophy was simple: it was to maintain a position of “armed neutrality.” Hitler decided to take a pass.

Hitler also had another problem: The Jews crammed into the Warsaw ghetto learned that they were systematically exterminated. The dictator ordered his forces to ship them off to death camps. Called “the largest single revolt by Jews during World War II,” those remaining decided to fight back. History records the event as the Warsaw Ghetto Uprising.

The uprising started on April 19, 1943, and the German command expected it would take three days to quell the insurrection. Instead, despite being starved and disarmed, the remaining Jews held off the German military forces until May 16. When the German military command took inventory after the last Jew had been murdered, they found the following:

Fifty-nine pistols of various calibers, and

Several hundred hand grenades, including Polish and home-made ones.

So, Joe Biden has a problem.

Most assuredly, his handlers are working on disarming the American public now that the Democratic Party has control of both the presidency and both houses of Congress.

Initially, they are likely to meet with some success. Some gun owners will cave in rather than hide or underreport their weaponry. Others will fall for the faux gun-buyback schemes, while others will use the ruse to offload inoperable or worthless firearms to satisfy the ATF gendarmes.

But, despite that NICS background-check system that, contrary to government promises, has access to the details of every firearm purchase since the illegal program was set up in 1998, there remain hundreds of millions of firearms that even Biden’s “restructured” ATF will be unable to find.

Disarming the American citizenry is critical to the Deep State’s plans, for, as Hitler noted, “The most foolish mistake we could make would be to allow the subject race to possess arms. History shows that all conquerors who have allowed their subject races to carry arms have prepared their own downfall by so doing.” 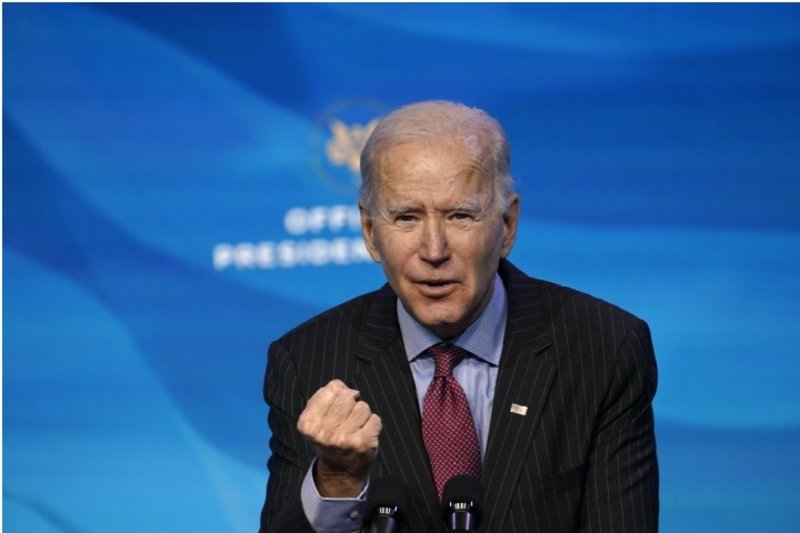 Biden Declares His Intention “To Defeat the NRA” - The New American

Posted from thenewamerican.com
Posted in these groups:

1SG Steven Imerman
Posted 1 mo ago
The clowns have taken the asylum.
(20)
Comment
(0)

SPC Michael Terrell
1 mo
No one in their right mind would try to enter a home to take any weapon.
(3)
Reply
(0)