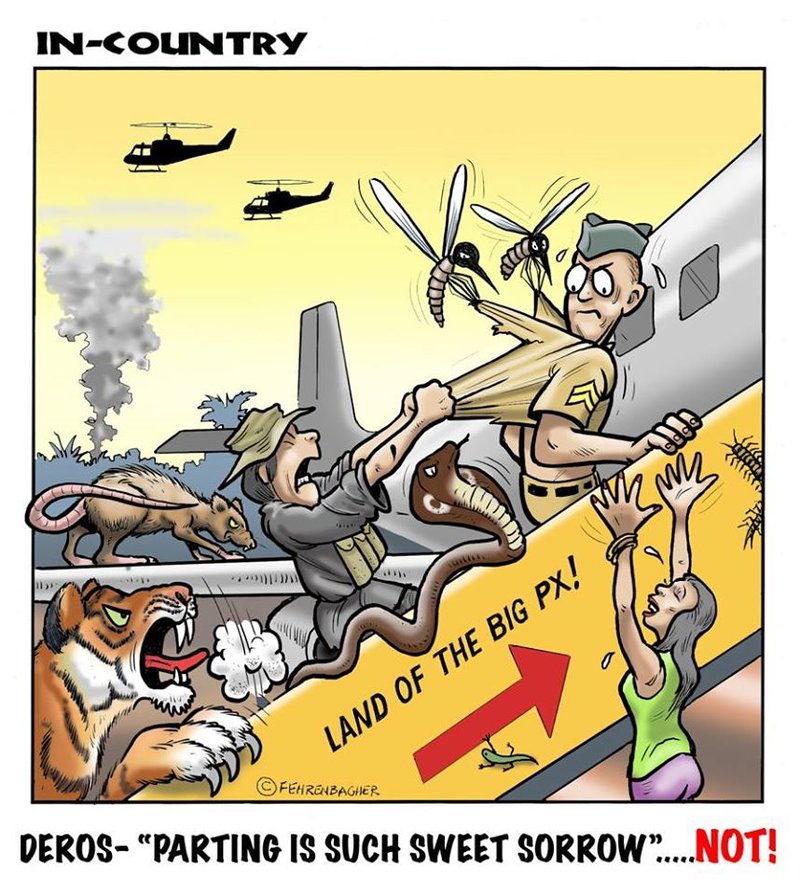 SPC Kurt Hesselden
2 mo
I was lucky and missed all the gala homecoming drama. Flown directly from Saigon to Camp Zama Japan hospital and then by Starlifter to San Antonio and then Ft Bliss Beaumont hospital for 4 months.
I wasn't treated to any civilian anti war sentiment till my convalescent leave flying into LAX to get married before I could get sent back to the grinder.
My homecoming to my fiances home in Pomona was memorable and LAX was all but an invisible blur to me.
(1)
Reply
(0)

LTC Lee Bouchard
Posted 2 mo ago
In my travels around the country I have met and enjoyed many V.N. vets in conversations about their experience's while in Viet Nam. Almost all said if they could they would go back and do it all over again. None were ashamed of their service. Only a few were ashamed of how they were treated coming home. The proud, the brave and the best.
(7)
Comment
(0)
show previous comments

LTC Lee Bouchard
2 mo
PO3 Bob McCord - One of DOD biggest mistakes was to allow reporters to travel almost anywhere and report whatever they saw. And allowed them to report in any way they saw fit. I doubt that will never happen again.
The media is a "closed shop" type of union. United Press International is an example. If not associated and a member your story would never see print. There were many good and honest reporters (small town reporters for example) who wrote great stories about the war that were free of political bias. Their reports made their way home but never printed or reported by the Nat'l. media. The "Free Press" has been dead ever since. It should be called the PRISONER PRESS because we are imprisoned to whatever they tell us.
(0)
Reply
(0)

1LT George Walsh
2 mo
LTC Lee Bouchard Thanks Colonel. What disturbs me is what I have read about the military high command at the time determining that the war was "unwinnable" and yet they and government officials (President, Secretary of State, Sec'y Defense and congressional leaders continued to increase troop levels. I think there could have been a path to "peace with honor" that could have meant fewer casualties, especially KIAs.
(1)
Reply
(0)

PO3 Bob McCord
2 mo
LTC Lee Bouchard - I think Joe Gallo was one that was embedded and did some excellent articles and interviews. Also was respected in country.
(1)
Reply
(0)

LTC Lee Bouchard
2 mo
Part of the problem on the issue of being unwinnable was all the restrictions placed on U.S. forces on when and how to conduct operations. The Air Force (B-52 and F-105) targets were restricted. They could bomb here at these targets but not here or there. Plus the A.F. forced their piolets to fly at certain altitudes and always taking the same routes.
The NVA simply moved their A.A. Missals to those locations and began the turkey shoot. STUPID. Only after loosing too many men and aircraft did the A.F. change their fixed rules. However, the targets that needed to be bombed were never attacked fearing Russia and China getting involved.

On the ground the restrictions were even worse. No fire zones (no engagements allowed)
controlled fire zones (you can engage but only if certain conditions were met) and free fire zones. (meaning anything was fair game) Often we needed approval to operate from the province chief. This is what is meant when you hear fighting with one hand held behind your back.

You cannot win a war with rules preventing you from winning. Never again!!
(0)
Reply
(0)