Fulton County prosecutors have sent letters to state officials instructing them to preserve documents related to “attempts to influence” the Georgia election, including a call in which former President Donald J. Trump asked the Georgia secretary of state to “find” votes.

ATLANTA — Prosecutors in Fulton County have initiated a criminal investigation into former President Donald J. Trump’s attempts to overturn Georgia’s election results, including a phone call he made to Secretary of State Brad Raffensperger in which Mr. Trump pressured him to “find” enough votes to help him reverse his loss.

On Wednesday, Fani Willis, the recently elected Democratic prosecutor in Fulton County, sent a letter to numerous officials in state government, including Mr. Raffensperger, requesting that they preserve documents related to “an investigation into attempts to influence the administration of the 2020 Georgia General Election.”

While the letter does not mention Mr. Trump by name, it is related to his intervention in Georgia’s election, according to a state official with knowledge of the matter. A copy of the letter was obtained by The New York Times.

“This investigation includes, but is not limited to, potential violations of Georgia law prohibiting the solicitation of election fraud, the making of false statements to state and local governmental bodies, conspiracy, racketeering, violation of oath of office and any involvement in violence or threats related to the election’s administration,” the letter states.

In addition to Mr. Raffensperger, the letter was sent to some of the state’s other top Republican officeholders: Governor Brian Kemp, Lieutenant Gov. Geoff Duncan and Attorney General Chris Carr.

The inquiry comes as Mr. Trump faces a second impeachment trial in Washington this week, on a charge of “incitement of insurrection” for his role in stirring up the mob that attacked the Capitol on Jan 6. The violence that day followed weeks of false claims by the former president that election fraud deprived him of victory, including in Georgia, where he lost by about 12,000 votes.

For two months after Joseph R. Biden Jr. was declared the winner, Mr. Trump relentlessly attacked election officials in Georgia, including Mr. Raffensperger and the Republican governor, Brian Kemp, claiming they were not doing enough to uncover instances of voting fraud that might change the outcome. In addition to the phone call to Mr. Raffensperger, he also called Gov. Brian Kemp in early December and pressured him to call a special legislative session to overturn his election loss. Later that month, Mr. Trump called a state investigator and pressed the official to “find the fraud,” according to those with knowledge of the call.

The inquiry makes Georgia the second state after New York where Mr. Trump faces a criminal investigation. And it comes in a jurisdiction where potential jurors are unlikely to be hospitable to the former president; Fulton County encompasses most of Atlanta and overwhelmingly supported President Biden in the November election.

The Fulton County investigation comes on the heels of a decision Monday by Mr. Raffensperger’s office to open an administrative inquiry.

Ms. Willis has been weighing for several weeks whether to open an inquiry, after Mr. Trump’s phone call to Mr. Raffensperger on Jan. 2 alarmed election experts who call it an extraordinary intervention into a state’s electoral process.

Former prosecutors said Mr. Trump’s calls might run afoul of at least three state laws. One is criminal solicitation to commit election fraud, which can be either a felony or a misdemeanor; as a felony, it is punishable by at least a year in prison. There is also a related conspiracy charge, which can be prosecuted either as a misdemeanor or a felony. A third law, a misdemeanor offense, bars “intentional interference” with another person’s “performance of election duties.”

Mr. Biden’s victory in Georgia was reaffirmed after election officials recertified the state’s presidential election results in three separate counts of the ballots: the initial election tally; a hand recount ordered by the state; and another recount, which was requested by Mr. Trump’s campaign and completed by machines.

Mr. Biden was the first Democrat to win the presidential election in Georgia since 1992. Mr. Trump accused Gov. Brian Kemp and Mr. Raffensperger, both Republicans, of not doing enough to help him overturn the result in the weeks after the election. Mr. Kemp and Mr. Raffensberger had each resisted numerous attacks from Mr. Trump who called the governor “hapless” and he called on the secretary of state to resign.

The Georgia investigation comes as Mr. Trump is also facing an ongoing criminal fraud inquiry into his finances by the Manhattan district attorney, Cyrus R. Vance Jr., and a civil fraud inquiry by the New York attorney general, Letitia James.

The mere beginning of an investigation into the polarizing former president could be a career-defining moment for Ms. Willis, who took office in January. She is the first African-American woman to hold the job in Georgia’s most populous county, and has already faced some daunting challenges: Atlanta is coming off a year with a high number of homicides, and Ms. Willis has promised an ambitious set of changes to the office, as well as a review of her predecessor’s controversial handling of the police shooting of a Black man, Rayshard Brooks, in June.

If Mr. Trump were to be convicted of a state crime in New York or Georgia, a federal pardon would not be applicable. In Georgia, Mr. Trump cannot look to Gov. Brian Kemp, a Republican, for a state pardon, and not just because the two have a fractured relationship. In Georgia, pardons are granted only by the state board of pardons and paroles. 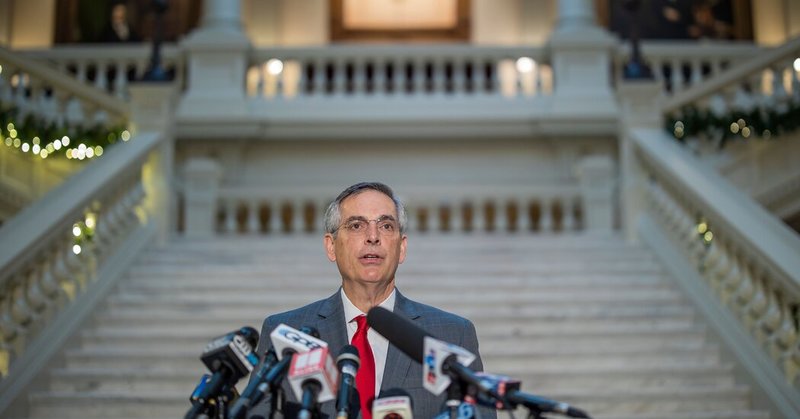 SPC Joshua Blotzer
2 mo
The text of the article has been posted if you want to read it.
(3)
Reply
(0)

SGT David A. 'Cowboy' Groth
Posted 2 mo ago
Saw something about this on the news last night brother SPC Joshua Blotzer
(3)
Comment
(0)

SPC Joshua Blotzer
2 mo
The text of the article has been posted if you want to read it.
(2)
Reply
(0)

SFC Melvin Brandenburg
Posted 2 mo ago
I'm sure other investigations will be forthcoming. Kind of like throwing mud on the wall to see what sticks. But, remember, we are all (including Trump) innocent until proven guilty.
(2)
Comment
(0)

SPC Joshua Blotzer
2 mo
The text of the article has been posted if you want to read it.
(2)
Reply
(0)
Show More Comments
Read This Next
RallyPoint Home