Lt Col Charlie Brown
183
28
6
15
15
0
Mount Rushmore by Bill Bennett and John Cribb
High on a granite cliff in the Black Hills of South Dakota stand the massive carved images of four presidents who led the United States from colonial times into the twentieth century: George Washington, Thomas Jefferson, Abraham Lincoln, and Theodore Roosevelt. Rising more than 500 feet above the valley, the four heroes seem to gaze over an evergreen sea to the rim of the continent.

Danish-American sculptor Gutzon Borglum chose the site for Mount Rushmore National Memorial, declaring that “American history shall march along that skyline.” The mountain itself had been named for Charles E. Rushmore, a New York lawyer who once owned mining property in the area.

On October 4, 1927, the job of carving the gigantic faces began. It lasted for fourteen years. About 400 workers toiled on the mountain, and many began each day by climbing 700 stair steps to the top and strapping themselves into swing seats before being lowered by cables over the mountain face. Dangling in the air, they blasted and drilled away nearly a half million tons of stone, carving faces as tall as a five-story building.

Borglum’s original vision was a sculpture depicting the four presidents to their waists, but time and money limited the carving to their heads. Borglum himself died before Roosevelt’s head was finished, and his son Lincoln finished the work on October 31, 1941.

The great project reaffirmed Americans’ dedication to democracy in a world increasingly threatened by bloody dictators. It reaffirms still. Mount Rushmore is not really a tribute to the leaders etched into South Dakota’s Black Hills; it is a tribute to the people who chose such leaders – and continue to choose them time and time again. It is a breathtaking place.

American History Parade
1822
Rutherford B. Hayes, the nineteenth U.S. president, is born in Delaware, Ohio.
1830
Isaac Adams of Boston patents a motorized printing press that helps enable the mass publication of books.
1895
The first U.S. Open golf tournament is played in Newport, Rhode Island.
1927
Carving begins on Mount Rushmore National Memorial.
1957
The Soviet Union launches the Sputnik 1 satellite, triggering a “race to the moon,” which the United States ultimately wins.
1993
In Mogadishu, Somalia, a bloody two-day firefight ends after the downing of two U.S. helicopters and the rescue of several trapped soldiers, a battle that inspires the book and movie Black Hawk Down. 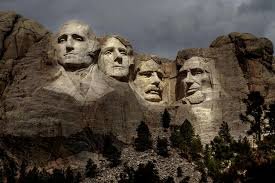 Office of the President (POTUS)
Posted 1 mo ago
Responses: 6

SPC Margaret Higgins
Posted 1 mo ago
The late/Adored President Abraham Lincoln: taught himself law; came from backwoods Kentucky; to become President of the United States; and, he was depressed; all of his life. Lt Col Charlie Brown
(2)
Comment
(0)
Show More Comments
Read This Next
RallyPoint Home