Monday marks 20 years since 17 sailors were killed in a jihadi bombing of the Navy destroyer Cole while in a Yemeni port.

The Arleigh Burke-class destroyer was conducting a scheduled refueling in Aden Harbor the morning of Oct. 12, 2000 when a motorized dinghy filled with explosives approached and detonated, ripping a 40-foot hole in the starboard side of its hull.

The ship’s engine room, galley and living quarters were badly damaged. In addition to those killed, 38 more were wounded in the blast.

“We let our guard down,” retired Navy Capt. Joe Bouchard told 13NewsNow. “The Navy and all the services were in the post-Cold War lull. … We were not really prepared for the kind of attack that happened to the Cole.”

At the time, Bouchard was commanding officer of the Cole’s homeport of Naval Station Norfolk.

He said the Navy has come a long way since the 2000 attack and has implemented safeguards to keep other similar attacks from occurring in the future.

The refueling stop was scheduled in a four-hour window, suggesting the terrorists had to have known about the ship’s presence ahead of time. The Cole had broken away from other warships in the Arabian peninsula, there to enforce trade sanctions against Iraq.

The attack on the Cole wasn’t the first time Al-Qaida targeted the U.S. In December 1992, the jihadi group conducted three bombings targeting U.S. troops in Aden. In 1993, al-Qaida aided the warlords who shot down U.S. helicopters and killed 18 U.S. soldiers in Somalia. In August 1998, the group also carried out the bombings of U.S. embassies in Nairobi and Dar es Salaam, killing some 300 people and injuring more than 5,000.

In its most infamous attack, 19 members of al-Qaida hijacked four U.S. commercial jets on Sept. 11, 2001 and crashed two of them into the World Trade Center buildings in New York City and one into the Pentagon. The last plane crashed in a field in Pennsylvania.

In 2007, a federal judge ruled in one lawsuit the Sudanese government was responsible for the Cole attack and was liable to pay damages to the families of the sailors killed. Four experts on terrorism, including then CIA Director R. James Woolsey, testified that Sudan allowed terrorist training camps to operate there and gave them diplomatic passports and the means to ship explosives and weapons without being searched.

Early this year, Sudan agreed to settle claims stemming from the attack to “normalize relations with the United States and the rest of the world.” Sudan also seeks to be removed from the U.S. list of state sponsors of terrorism, which it has been on since August 1993, according to the State Department.

To honor the fallen for this 20-year anniversary of the attack on the Cole, the Navy will observe a moment of silence at all its installations and will hold a memorial ceremony at Naval Station Norfolk’s Pier 12 on Monday at 10:30 a.m. The Cole will be moored to the pier during the ceremony.

“The crew of Cole fought valiantly for more than 96 hours to save their ship and shipmates,” said Adm. Mike Gilday, chief of Naval operations, in a message to sailors. “Their actions are the reason why Cole remains a vital part of our Navy today.” 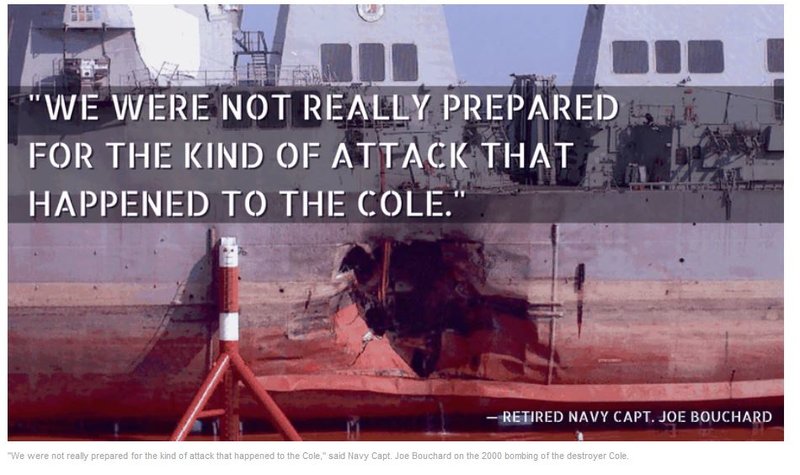