How would you react if you were on a flight where a family was boo'd for being allowed off the plane first to receive their soldier's body? 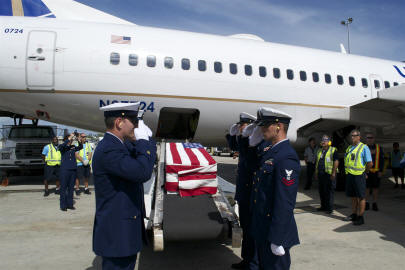 What would you do, if a passenger in first class "boo'd" a Gold Star family for being allowed to leave the aircraft first to receive their fallen son/daughter in the military?
Posted in these groups:

SPC Chris Ison
3 mo
SPC Joseph Kenny - Thank you for the clarification. I only mentioned it because there is another thread where a family was supposedly boo'd in an airport in TEXAS.

This is the question:

if a passenger in first class "boo'd" a Gold Star family for being allowed to leave the aircraft first to receive their fallen son/daughter in the military?

It does NOT say escort it says family.

Again, ignorance to the actual handling of military remains.

I have seen some pretty stupid questions in this forum from "What would you do if a private told you no" to "What do you do if you see people in PT clothes in an airport".

It feels like the majority of leaders in the modern military have no idea about command authority and military presence/bearing.

I like the part in Taking Chance, and I hope it is not a Hollywood embellishment, where Lt Col Sobel refuses to remove his jacket.

If I was an escort and some dufus boo'd me, or tried to get ahead of me, i would let him. I would not dishonor the uniform by behaving like a child.
(3)
Reply
(0)

SFC Wilfredo Ramos
1 mo
SPC Chris Ison - Instead of watching movies, you should educate yourself a bit before speaking. On many occasions, the Soldier's remains arrive at a base to be received by his/her family and then travel together to the final destination. No, I don't have to watch movies I've been there ...
(0)
Reply
(0)

I know how this shit fucking works.

If you watch the movie you would see that the officer who volunteers to take the body home, thinks because the soldier was form Colorado the body would go to Colorado, but because he was unmarried the remains get shipped to Montna (maybe Wyoming) to his family.

Furthermore as of 2007, military remains are no longer shipped commercial air.

After lodging a complaint with the Army and receiving help from California senator Barbara Boxer, the Holleys saw their son met by an honor guard instead. Still angry, they began a campaign to change the way all military dead would be delivered. California representative Duncan Hunter, then chairman of the House Armed Services Committee, wrote legislation that eventually became known as the Holley Provision to the 2007 Defense Authorization Act. It directed that the bodies of fallen soldiers, sailors, airmen, and marines would no longer be booked passage on US Airways, Delta, Northwest, or Continental but would be flown on military or military-contracted flights and met by honor guards.

Get fucking bent you liars.

Inside the Return of America's Fallen at Dover Air Force Base

As President Obama salutes flag-covered caskets, revisit this award-winning, behind-the-scenes look at a military process that was, under his predecessor, highly secretive

SFC Wilfredo Ramos
13 d
Like I said before " I've been there" so don't tell me that you know how this shit fucking works. First of all, this is not shit, second, how many military funerals have you been in charge of? Because I did it for more than a year. Do not try to tell me how it's done, I know from experience, not little movies or reading stories on the Internet.
(0)
Reply
(0)

GySgt David Weihausen
Posted 4 y ago
I would calmly and quietly administer a wall-to-wall counseling to the individual and then stand and salute as the family passed by. Semper Fidelis.
(403)
Comment
(0)
show previous comments

SPC Chris Ison
14 d
SGT Dan Gray - "And he got a third one the same way. And all you have to do is check and you will see that every one of his purple hearts was submitted BY him and FOR him as none of his superiors would do it. "

That is absolutely NOT how the purple heart is awarded. You are not submitted for it by your chain of command, it comes form the line of duty report from medical. The purple heart is not an award it is a RIGHT.

The Purple Heart differs from most other decorations in that an individual is not "recommended" for the decoration; rather he or she is entitled to it upon meeting specific criteria. A Purple Heart is awarded for the first wound suffered under conditions indicated above, but for each subsequent award an oak leaf cluster or 5/16 inch star is worn in lieu of another medal. Not more than one award will be made for more than one wound or injury received at the same instant.

You would think a Sergeant who had attended a promotion board would know this, it is part of the board questions.

All of his crew members state his awards are properly awarded.

The chain of command could always deny the awards, even if they were submitted by Kerry himself. That is the fucking process.

But. I don't expect you to understand the process i bet you have never spent a single day in combat. If you had you would have more on your profile.

When the NVA realized that McCain was a VIP POW he was offered to GO HOME EARLY, and he didn't. He was tortured just like everyone else.

". Or why this waste of skin did a "wet start" (you navy people know what this means) and destroyed a ship as well as killed over 100 sailors from the resulting explosions and fire. "

You are talking about the USS Forest fire, and you can watch the training video on You Tube, McCain actually injured during the fire. It was caused by a loose bomb, not a wet start.

And yes I know exactly what a wet start is, do you?

You fuckheads really need to stop putting combat veteran's down. You fucking REMFS with no combat experience should just keep your pie holes shut, you are embarrassing yourselves.

You are letting a draft dodger malign actual people who served. Even if they were pieces of shit on active duty, they still fucking served.

" ONLY fucking twit ass none combat dip shitloser here is you "

I served in Desert shield, operation restore hope, and operation Iraqi freedom. I have the combat action badge.

Keep it coming. I think you are a LIAR, special forces weapon sergeant my fucking Lilly white ass.

SGT Dan Gray
13 d
SPC Chris Ison - yet even more BS nonsense from you. Were you around in Vietnam to read the after action reports? No? Thought so. maybe you should read "Unfit for Command" a book WRITTEN BY one of the people that was with Kerry each time. I and others here think that person knows far better how this happened then some crybaby that is constantly proved wrong.

And sorry you used the discredited WaPo which is about bankrupt because they dont have the money to pay their lying staff. I am using the after action reports directly from the office of the commander of the Pacific Fleet. You can continue to lie all you want snowflake but it isnt going to work as the AA reports are calling you the liar you are.
(0)
Reply
(0)

SPC Chris Ison
13 d
SGT Dan Gray - Oneil, the guy who wrote the book has No medals and no purple hearts, he never served with Kerry. Why don't you FOIA his records? Hmm?

You are too fucking stupid to debate, not only are you fucking ignornat of what actually happened, but you are too close minded to even consider a different point of view.

I am using the after action reports directly from the office of the commander of the Pacific Fleet.

Only snowflake here is you you lying sack of shit, I do not believe a thing your laying ass says. I don't believe you ever served either.

SGT Dan Gray
12 d
SPC Chris Ison - Never said he did now did I? I said he was WITH Kerry the whole time of Kerry putting himself in for the Purple Hearts because his superiors would not. Your pitiful attempt at spin just shows you still dont have any idea what you are talking about and whats worse you dont seem to care that you have been blasted for your lies in every thread you have been in. No wonder nobody believes you
(0)
Reply
(0)

SFC Pete Kain
Edited 4 y ago
Posted 4 y ago
If I knew they were gold star, I would have given them my seat in first class and saluted as they passed. Maybe that's just me. Booing shows no class.
(315)
Comment
(0)
show previous comments

SPC Chris Ison
14 d
PO3 Gary Dittamore - 23 bombing missions over North Vietnam, means he was a fucking hero. See when you fly a plane, you are basically storming a machine gun nest, specially in the Vietnam war and SAM alley.

And he did it 23 fucking times.

How many machine gun nests have you stormed jack ass? As a CB i am guessing NONE.