A1C (Join to see)
288
8
6
3
3
0
Ever ride a turbo or supercharged motorcycle??? I have several Buells, including a 1998 S1 Black lightning as well as a 2001 S2 both are tubers, And I have some XB models as well. But this is NOT one of my bikes, but its calling MY NAME! But reading some old period motorcycle magazines been wondering about Turbo or supercharging motorcycles. There was a feature on some 1974 Magazines covering a Turbo kit on a Iron Head sporty and few problems, and lots of power but Iron heads have had issues. But, this one just looks like tons of fun. I am awaiting more tech and better photos, but this is an exceptional bike for the money. Not mine, but damn!
" Turbocharged VR1000 replica. VR1000 tribute turbocharged Buell S1. Good street title. Recent Aerocharger factory rebuild with ceramic bearings, recent Odyssey battery, Water injection Aquamist System 1 with race pump, engine rebuild with less than 1000 miles. Mikuni 42mm flat slide carb, Brian Olsen supplied French made fuel regulator and fuel pump. Dyna programmable ignition rev limit set to 7500 RPM. I used stock "D" cams for the mild rams and timing, I did have a set of Lienerweber high performance special turbo cams made ( they took two years), but never installed them, 1250cc Nickasil bore aluminum cylinders, dished 883 to 1250 conversion forged pistons, Thunderstorm heads, figures out to 8.9 to 1 compression, dual plugged, 1.86" intake valves, Kalguard GunKote High Corrosion Resistant thermal bonded coating on exterior engine surfaces, HP Extreme exhaust ceramic coating in blue, 340mm Ferodo Brake Tech Blacklightning Superlight series cast iron front brake rotor with the stock 6 piston caliper. The huge rotor was CNC machined using a 12,000 pound chunk of cast iron billet. NLA. Aerotech VR1000 fiberglass fairing with GP tail section. Turbo set at 13lbs now can go up or down, with pump or race gas what ever you prefer. Many more items, Very quick. Some minor belt buckle scratches, minor cracks and minor fluorescent orange fading but the bike shows very well. Located in Midwest
$7500 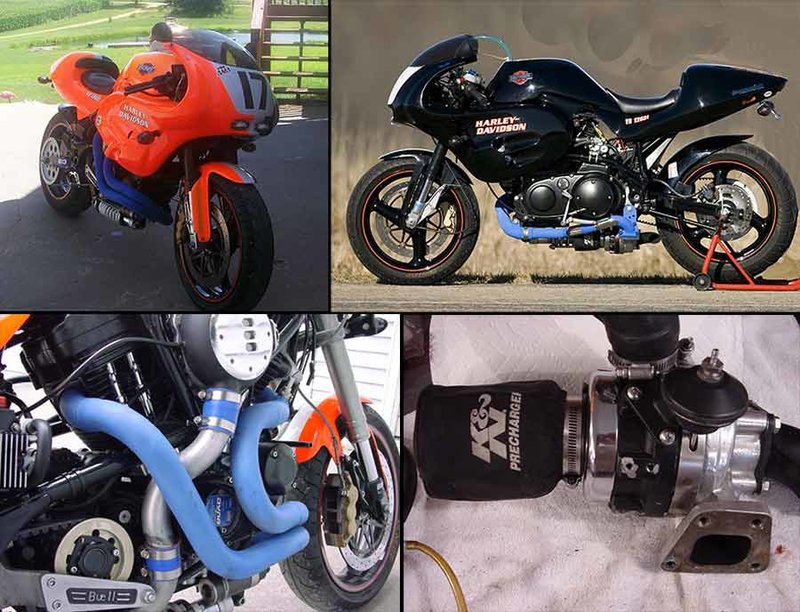 TSgt David L.
Posted 8 mo ago
Hmm, we have an XB12R but I can't imagine a turbo version. Not bad money for it. Bad time of year to venture to the Midwest depending on where right now.
(1)
Comment
(0)

TSgt David L.
8 mo
Never ridden anything with a turbo or blower on it, BTW. Probably QUICK!
(1)
Reply
(0)