A Marine Corps Vet confronts a fake "Marine" Special Forces poser in New Orleans. Poser claims he is allowed to wear the Army ACU and Green Beret because he is Special Forces.

https://www.youtube.com/watch?v=TUrmbsAlQG8
Posted in these groups: 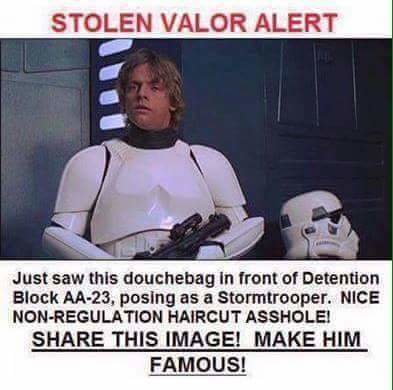 CPL José A CastroPacheco
>1 y
Our identity as guardians and keepers of democracy, shall not be undermined by the actions of fake heroes. We are the peace keepers of our times. Don't let it be forgotten.
(1)
Reply
(0)

MSgt Donald Watkins
>1 y
TSgt James Kothrade - AS both know, you never mix any uniform . I believe at the time I retired you could only wear the uniform if you were within Req. and it was a formal type function. But you never mix any uniform. And these people that are wearing these uniform would still have military ID of some kind. Medically Retired, retired they would have a ID card. Ask them for it. Am I wrong? Thank you for your service.
(1)
Reply
(0)

Cpl Daniel LaCoste
>1 y
As for me, I started out in the Ga.ANG while still in high school. after a couple years in college while still in the NG. I joined the Marine Corp. Now if that was not enough i have now served in law enforcement for over 25 years. Any scumbag POS that does this simple should be BITCHED SLAPPED on the spot. It should be a law that those that served be required to do that on the spot.
(1)
Reply
(0)

Sgt Scott Parrish
>1 y
Should have had the soup sandwich mfr take the beret and blouse off right there. The kid obviously has some issues. Stuck to his story like he believed it. Messed up.
(1)
Reply
(0)

SFC (Join to see)
>1 y
First Sergeant Eugene Harness and all others readong these posts none of us are perfect. To this everyone says something that would be looked upon as out of the ordinary like Major Steven did. No matter the branch of service or rank it is common that we witness the loss of life.

MSgt Donald Watkins
>1 y
SPC Eric Lee - SPC Eric Lee you're entitled to your opinion but don't be disrespectful to the Major. This war has gone on long enough for just about all that has served seen friends die.
And for our Supreme Court to reverse the the decision on these people who want to be seen as a soldier, Airman, sailor and Marine but doesn't want to go put his or her life on the line for our country can now parade themselves around as one of us and can't be punished for it. That is a disgrace. Our congress has to make a law and our President sign into law so that they can be punished.
It's hard to watch these videos where one wants to be somebody he's not and for all the words to be said to them. We know he should have an ID card on him or herself. So for him not to have one just call the police right then and there.
(1)
Reply
(0)

Cpl Kirk Lurch Davis
Posted >1 y ago
Notice the poser places hands in pockets when the challenge begins. Marines do NOT place their hands in pockets. Confidence level diminishes as the questions begin & the more questions asked, the lower the confidence level sinks into epitome. Go home & change and this douche bag comes back with some stupid garbage about a 2nd Lt. Some people don't know when to shut their pie holes & leave.
(30)
Comment
(0)

Cpl Alan Mackin
>1 y
Yeah, the hands in the pockets really stood out to me.
Sad to see some people feel the need to walk around in public dressed up like that posing to be something they never were.
(3)
Reply
(0)

SGT Lance Snyder
>1 y
Yeah Hands in the Pocket, that's the position of attention for the National Guard (14 years regular army, then I retired from the guard)
(3)
Reply
(0)

SSG John Mitchell
>1 y
It wasn't just that but the Army CPL stripes on the collar of ACUs? Seriously? No patches. No name tap or US Army tap. Even the SF guys I met all over Bragg wore their Uniforms on post and around Fayetteville in accordance with AR-670-1. The only ones you never saw in Uniform, you wouldn't even know were Military other than their bearing and what kind of shape they were in and even then, you just thought they were Retired.
(2)
Reply
(0)
Show More Comments
Read This Next
RallyPoint Home