Trump impeachment video: What was in it?

PO1 William "Chip" Nagel
589
43
25
6
6
0
Democrats opened their case against Donald Trump by showing a chilling 13-minute video from the Capitol riots which US senators watched in stunned silence.

The goal of the prosecution was clear: keep the focus squarely on Mr Trump, linking him and his words to the deadly riot that followed.

They also wanted to ensure the jury of senators - and, importantly, Americans watching at home - saw the brutal violence of the mob, the panic of police, and the fear of lawmakers.

The montage opens on Mr Trump speaking to a cheering crowd on 6 January before moving through clips showing the horror of the day - played out in excruciating, expletive-laden detail. 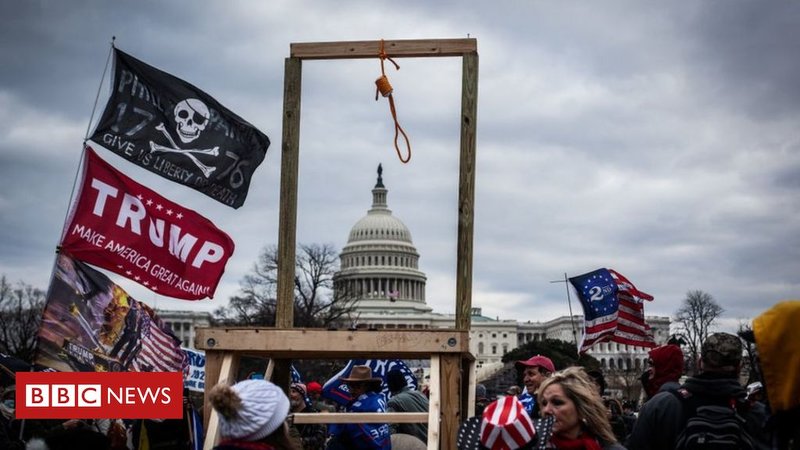 Trump impeachment video: What was in it?

SSgt (Join to see)
Posted 2 mo ago
And to think, there are traitors on RP who support this guy and what happened that day.

It’s truly unbelievable. Watching the videos, it’s absolute insanity that more of the terrorists were not shot as they closed in our Senators and Representatives.
(6)
Comment
(0)
show previous comments

CWO2 (Join to see)
2 mo
SSgt (Join to see) you can say the same thing about the old white democrat party and it’s leadership.
(2)
Reply
(0)

SPC Robert Conway
2 mo
SGT Richard Lovell - The party of unity? Tell you what, you first. Get some GQP folks to actually acknowledge what they did and apologize for all the crap they have done and allowed to be done, then you can look for some unity. Until then, buckle up cupcake, Dems are finally using the GQP playbook.
(2)
Reply
(0)

"In Trump's second rally in Arizona on March 19, 2016, a protester was punched and kicked by a rally attendee. As the incident occurred, Trump said from the podium, "They're taking away our First Amendment rights. They're troublemakers, they're no good, and we have to be careful. We've gotta take our country back, folks. We gotta take our country back, very simple." The rally attendee, Tony Pettway, was charged with assault with injury and released.

At the same event, Trump campaign manager Corey Lewandowski was accused of pulling on a protester's collar. Campaign spokeswoman Hope Hicks denied that Lewandowski touched the protester. She said in a statement that video of the event reflected that the protester was reacting to another man who pulled him.[30] Trump also said that Lewandowski was only in the crowd to remove offensive signs held by protesters. He said, "They had signs up in that area were horrendous. I will give him [Lewandowski] credit for having spirit.”

In an interview the following day on March 20, 2016, Trump defended Pettway by stating the protesters were "not innocent lambs." He continued, "Well, you know, he [the protester] was wearing – he or his partner was wearing a Ku Klux Klan outfit. This happened to be an African-American man [Pettway] who was very – a person at the rally, who was very, very incensed at the fact that somebody, a protester, would be wearing a Ku Klux Klan outfit."

Trump also said many of the protesters were "professional agitators" and criticized the media for its unfair coverage of the incidents. "I think it's very unfair that these really, in many cases, professional, in many cases, sick, protesters can put cars in a road blocking thousands of – of great Americans from coming to a speech and nobody says anything about that," said Trump."

Anything I've seen about counter protesters at Trump rallies, MAGA people started the altercations the majority of the time.

A timeline of hate: Trump’s history of encouraging violence, from 2015 to 2021

Trump has emboldened hate groups and political violence from the moment he announced his presidency.

CWO2 (Join to see)
Posted 2 mo ago
Did they show the video of Capitol Police, letting protesters through the barricade, without challenging them?
(4)
Comment
(0)
show previous comments

Why I am bothering to explain this to people who have move into a new reality and not left a forwarding address, I don't know, but here I am.
(1)
Reply
(0)

SPC Robert Conway
2 mo
SFC (Join to see) - On the subject of the cop taking the selfie, it was supposedly taken after everything was over, I really don't care, it has no material value to the original issue.

Like I said before, are the hero who is going to be the one with the baton out fighting a vastly out numbering crowd? Or the one who wants to start the shooting?

The attackers were there, committing illegal acts, with support and instigation by Trump. That is all that matters to the question at hand.
(0)
Reply
(0)

SPC John Smith
2 mo
I left my front door unlocked last night. Does that mean I removed any barrier to entry and anyone is free to enter my home?
(1)
Reply
(0)

SFC Thomas McMahon
2 mo
SPC Robert Conway - Prove it or you're a liar. I said there are videos of the Capitol Police moving the barriers and letting people walk right past. That video showed just that, the context doesn't matter. So you saying nope, try again, is silly. So now I'll give you a taste of your own medicine. Prove to me they were given that order, or you're a liar. Unless you can prove that, you're simply making an assumption not backed by any evidence. I backed my statement with clear evidence. I'm gonna pick apart your assumption right now. If you're told to abandon you're position and retreat to a more defensible one, you aren't going to remove the only barrier between you and the aggressors before you do that, you're going to leave that barrier in place to give yourself more time and put distance between you and the aggressors while you get to your new position and set up defenses. Come on man, you were in the Army, I get you weren't in a combat arms MOS, but this is basic training 101. Furthermore, if that were the situation, they'd be hauling ass to retreat to a new position. Those officers removed the barrier, and then slowly started walking back towards the camera, meanwhile being passed by the aggressors, infiltrators, whatever you want to call them. The officers didn't even look at them let alone take any action towards them, and the infiltrators didn't even look twice at the officers as they walked past them, certainly showed no aggression towards them, weren't attacking them in that footage.
You're turn now, prove your statement..........or you're a liar
(0)
Reply
(0)

SGT Richard Lovell
Posted 2 mo ago
It is unfortunate that they take the actions of a few and attach to the many. It truly was a plea to the emotions with very little, if any actual fact that President Trump had any direct action, or frankly, indirect action in this. How do you take "march peacefully and patriotically" and get "insurrection" from that? Much like the first impeachment when ALL you heard from Schiff, swalwell and company that there was ample evidence to prove collusion; which by the way isn't a crime. Every chance they got it was "more than enough evidence to show", etc, etc, and it would seem, that just like the first impeachment, so goes this one...no actual evidence or anyone that had direct communication or knowledge of any wrong doing as in the first impeachment witnesses. It has been asked in the first impeachment and is now being asked in this, is the type of action that will bring the country together?Will the witch hunts ever stop? Will the hate from the left/democratic socialists ever stop? he most shameful part of all of this is how Biden, when he actually did come out and campaign for a very short period of time, talked about unifying the country and moving forward. He has done nothing of the sort and has called approximately 75 million Americans "white supremacists", "racists" and other divisive and insulting names. The call for 'deprogramming' and 'reeducation' by the left of republicans and conservatives is not only divisive, but dangerous and eerily reminiscent of communist, fascist, dictatorship regimes and considering the show of force by the Biden administration with 25k troops in our Capitol, that is very much like the rule of a dictator. and for what? Truly, is this unifying for our country? Again, I ask, where is the unifying message he claims to support? It wasn't in his words and it isn't in his actions with his police and 50+, counting EO's in his first week of office. what was it president Biden said? I paraphrase "without Congress, a consensus, governing by EO, is the way governing is done by a dictator". He may have given proof of that with the occupation of the Capitol by armed and unarmed troops...
(1)
Comment
(0)
Read This Next
RallyPoint Home