25 APR--This Day in US Military History 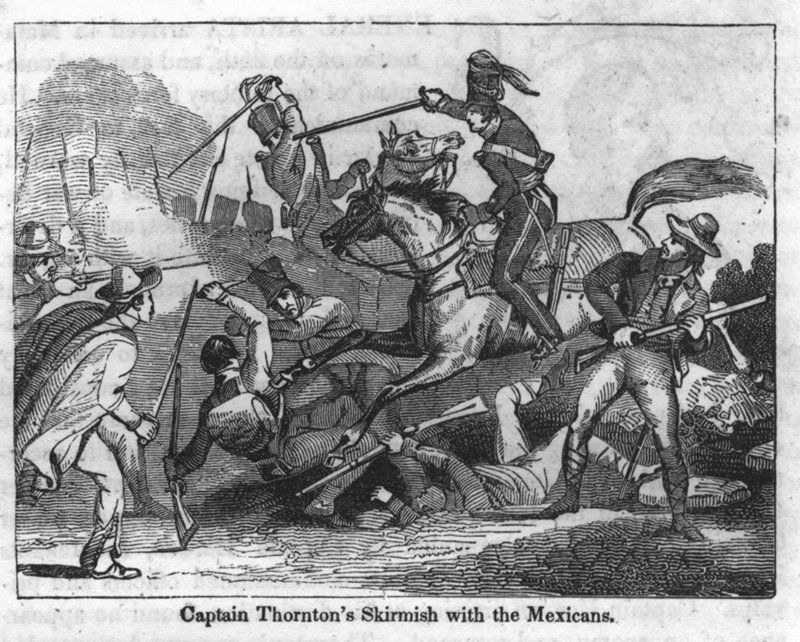 1846 – With the Thornton Affair, open conflict begins over the disputed border of Texas, triggering the Mexican–American War.

The Thornton Affair, also known as the Thornton Skirmish, Thornton’s Defeat, or Rancho Carricitos was a battle in 1846 between the military forces of the United States and Mexico twenty miles west along the Rio Grande from Zachary Taylor’s camp along the Rio Grande. The much larger Mexican force completely defeated the Americans in the opening of hostilities, and was the primary justification for U.S. President James K. Polk’s call to Congress to declare war.
Although the United States had annexed Texas, both the US and Mexico claimed the area between the Nueces River and the Rio Grande. Polk had ordered Taylor’s Army of Occupation to the Rio Grande early in 1846 soon after Mexican President Mariano Paredes declared in his inaugural address to uphold the integrity of Mexican territory to the Sabine River.
Taylor received two reports on 24 April of Mexicans crossing the Rio Grande, the first crossing below his camp, the other a crossing upriver. Taylor ordered Captain Croghan Ker to investigate downriver and Captain Seth B. Thornton with two Dragoon companies to investigate upriver. Ker found nothing but Thornton rode into an ambush and his 80 man force was quickly overwhelmed by Torrejon’s 1600, resulting in the capture of those not immediately killed. Thornton’s guide brought news of the hostilities to Taylor and was followed by a cart from Torrejon containing the six wounded, Torrejon stating he could not care for them.
Upon learning of the incident, President Polk asked for a Declaration of War before a joint session of the United States Congress, and summed up his justification for war by famously stating:

“The cup of forbearance had been exhausted even before the recent information from the frontier of the Del Norte [Rio Grande]. But now, after reiterated menaces, Mexico has passed the boundary of the United States, has invaded our territory and shed American blood upon the American soil. She has proclaimed that hostilities have commenced, and that the two nations are now at war.”

On May 13, 1846, Congress declared war on Mexico, despite the Mexican government’s position that Thornton had crossed the border into Mexican Texas, which Mexico maintained began south of the Nueces River (the historical border of the province of Texas).

MSgt Robert Pellam
Posted >1 y ago
The Mexican/American war is so unappreciated. Through this war we acquire most of the land in the west of the United States. Also this lets a few Civil war Generals get some experience. Lee, Grant and Winfield Scott, just to name a few. An interesting time.