6 MAY--This Day in US Military History 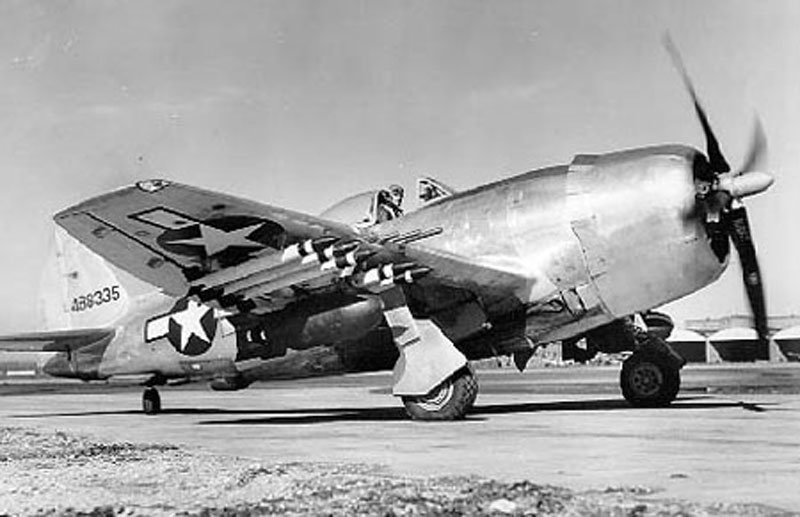 The Republic P-47 Thunderbolt was one of the largest and heaviest fighter aircraft in history to be powered by a single piston engine. It was heavily armed with eight .50-caliber machine guns, four per wing. When fully loaded, the P-47 weighed up to eight tons, and in the fighter-bomber ground-attack roles could carry five-inch rockets or a significant bomb load of 2,500 pounds; it could carry more than half the payload of the B-17 bomber on long-range missions (although the B-17 had a far greater range). The P-47, based on the powerful Pratt & Whitney R-2800 Double Wasp engine—the same engine used by two very successful U.S. Navy fighters, the Grumman F6F Hellcat and Vought F4U Corsair—was to be very effective as a short-to-medium range escort fighter in high-altitude air-to-air combat and, when unleashed as a fighter-bomber, proved especially adept at ground attack in both the World War II European and Pacific Theaters.
The P-47 was one of the main United States Army Air Forces (USAAF) fighters of World War II, and served with other Allied air forces, notably those of France, Britain, and Russia. Mexican and Brazilian squadrons fighting alongside the U.S. were equipped with the P-47. The armored cockpit was roomy inside, comfortable for the pilot, and offered good visibility.
A modern-day U.S. ground-attack aircraft, the Fairchild Republic A-10 Thunderbolt II, takes its name from the P-47

Invite others to respond by typing @name
Posted in these groups:

SPC (Join to see)
Posted >1 y ago
The grand-daddy of the A-10, I consider the Skyraider the daddy.
I keep forgetting about the Wilderness Campaign. I guess since I live in PA it's all about Gettysburg.
(1)
Comment
(0)
1
1
0