CPL(P) (Join to see)
8.32K
11
32
0
0
0
Like Social Media, Bitcoin is considered as a disruptive innovation. Bitcoin is in the forefront of disruptive financial transaction technologies. For those who are not aware of this, Bitcoin is an electronic form of currency unbacked by any real asset and without specie, such as coin or precious metal. As of this writing, it is not regulated in the US by any financial or government institution however very recently SEC ruled that it has subject matter jurisdiction over purported use of Bitcoin when used as investment.  The courts have ruled that SEC has subject matter jurisdiction over Bitcoin investmentment services.
https://ia600904.us.archive.org/35/items/gov.uscourts.txed.146063/gov.uscourts.txed.146063.23.0.pdf
Bitcoins are  being used globally by citizens, businesses, online gamblers, Non profit organizations and other actors for executing commercial transactions. People are purchasing coffee to donating to non-profits using Bitcoin. Recently, Texas Congressman Steve Stockman offered to take donations in bitcoins.  Bitcoins, although a virtual currency can being converted to real currency, effectively making it a real currency.

Very recently,  DoD/Air Force funded  SBIR grant to a well known US high tech firm  for  development of dual use technology  aimed at establishment of trust and  security of transactions between digital wallets and physical point-of-sale machines.  The Bitcoin online magazine did not hesitate to publicize this grant for  PR of Bitcoin.

http://sbir.gov/sbirsearch/detail/414672
http://bitcoinmagazine.com/8531/u-s-air-force-building-bitcoin-payment-gateway/
While USG, general public and the world at large gets familiar with this new currency and understands the opportunities and risks, what preventive measures would you  recommend so the unsuspecting service member  does not get carried away with this virtual currency and more importantly, until the hazards/technology / risks of this currency is not clear,  how can this  topic be introduced at unit level CRM for protecting our subjects in the absence of any DoD directives. ? 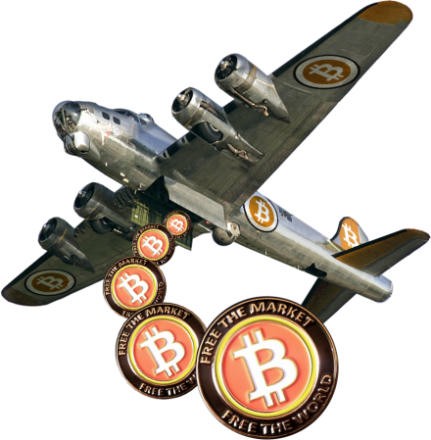 SGT (Join to see)
Posted >1 y ago
I thought I was the only person in the military who knew about bitcoin.  Good to see that I underestimated my brethren.
(2)
Comment
(0)
SGT Gary Frank
>1 y
I keep getting e-mails titled "Edison's Revenge on the Dollar" trying to get me to purchase Bitcoins.
I believe that it was Thomas Jefferson who warned us against Paper Money and Central Banks [still looking for the quote]. Regardless from who those warning came, imagine what our Forefathers would think about E-Money.

As technology advances we loose sight of things that are Tangible and begin to favor Virtual Assets. This is a huge mistake. Virtual Books, Economies, etc, can all be wiped out at the push of a button or some virtual virus.

LTC (Join to see)
Posted >1 y ago
"form of currency unbacked by any real asset and without specie, such as coin or precious metal."

Are you talking about the Dollar??

I do not trust the dollar to maintain it's value. I have no idea what will happen with bitcoin but I don't think the government needs to do anything. The less the government does the better.
(1)
Comment
(0)
MSgt Fred Gondzar
6 y
True!
The USD will never increase in value. In fact, the USD has lost 96% of it's buying power since 1913. Wouldn't we rather want to have something that will increase in value, and we can turn it into USD any time we want?
(0)
Reply
(0)
Show More Comments
Read This Next
RallyPoint Home