"Edited" What are your thoughts, if any, on the Jade Helm Police Force exercises going on in the Southwest?

SPC Korey R.
24.1K
176
175
6
6
0
I WILL concede the "Unconstitutional" basis of this discussion and have amended the title to reflect this. The question on Jade Helm and what it stands for still remains!!!!

https://www.facebook.com/JADEhelm015?fref=ts
Posted in these groups:

LTC Jason Mackay
Posted >1 y ago
If it is unconstitutional, What article is being transgressed? If it is that illegal, no one has challenged it in court? ACLU? If so what was the outcome? Is this a military coup or is it an executive branch power grab? How are they funding it? Is the Legislative Branch complicit? They would have to appropriate the funds to resource it. How is Congress keeping it secret? If it's true purpose is so secretive, how are they keeping thousands of military personnel, local governments, and federal employees in the dark? The logistics alone would have to be in place already. Would someone not blab to someone?

People will allege that this take over is "imminent". I am going to tell you that exercises like this have gone on forever and no martial law to speak of has been implemented. What is the set of conditions? What does the government have to gain from a hostile populous? http://www.washingtonpost.com/news/checkpoint/wp/2015/03/31/why-the-new-special-operations-exercise-freaking-out-the-internet-is-no-big-deal/

I have not participated in Jade Helm, but I have fought 40 plus rotations at NTC as a Krasnovian and as a Parumphian Paramilitary Group (OPFOR), a similar fictitious region, with similar atmospherics. Can honestly say the objective was never to settle the issue of who retains the Mad Greek in Baker CA. The full spectrum training objectives, re-do of less than successful iterations, and cancelled rotations are all highly elaborate window dressing for a government take over. http://mentalfloss.com/article/31437/5-fictional-countries-where-us-army-trained-fight

Nothing I can say here would dissuade true believers. Fine by me, but you are burning way too much energy on this when there are actual problems that could be worked on.

5 Fictional Countries Where the U.S. Army is Trained to Fight

During World War II, the Allies famously tricked Hitler into believing that the First United States Army Group would invade France at Pas-de-Calais. The real invasion, of course, came at Normandy, and the First United States Army Group did not take part—mostly because it didn’t actually exist. Fake military units aren’t the only thing the military is good at inventing. Sometimes it invents entire nations. When the U.S. Army trains for battle,...

(14)
Comment
(0)
show previous comments
LTC Jason Mackay
>1 y
Korey, I will respect your opinion. I have mine. IMHO This thing is too wide and involves too many people, requiring too much exacting detail to stay in the dark. SOF guys are also some of the most rigid in Patriotic and Constitutional thought. Just don't see them simply clinging to the Nuremberg defense.
(2)
Reply
(0)
SPC Korey R.
>1 y
NEVER Questioned the Patriotism of Anyone! I wore the uniform and see all who do and did as Brothers and Sisters. Its Not the point of the discussion. Its about getting the feelings of everyone on what I believe to be an overstep by the powers that be with the type and time and place of this particular training scenario. Not ones in the past that have been happening for Years. Not the former training of Foreign troops at the School of Americas, but the widespread foreign SF troops training abroad her in country as we speak, and the widespread removal of top military commanders in the past few years and the scope and type of training going on in rural areas like none really before that have the hair on the neck standing up. This Sir, is the whole point of this discussion on my part.
(0)
Reply
(0)
SGT Jesse Velasquez
>1 y
Spec..... I get what your saying and I completely agree with you. The LTC said it himself, their are to many people involved in this, so when it all does go to hell, we don't know who to hold responsible. In my 9 years in the infantry, I have never trained in U.S. urban cities, especially populated ones. I first heard of such excsercises in 2013, taking place in downtown Miami. If you haven't seen it, it's on YouTube. And then I heard more taking place in Texas. They've been at it for so long, I guess they had to make it public because the training needed to involve other units and not just combat units. So why are they training in U.S. cities?? I'm with you in your concerns brother. Theirs people who fear that a false flag event will occur here in the U.S. somewhere in between August and October. I guess we'll see.
(1)
Reply
(0)
COL (Join to see)
>1 y
Hmmmmmmmmmmmm.....
(0)
Reply
(0)
9
9
0

We've been conducting Military operations on US Soil for over 20 years.

We have lots of land in the US were we have essentially free reign.

LTC (Join to see)
Posted >1 y ago
I want to be sympathetic to the concerns, but I don't know where to begin. It seems social media has done a solid job in working people into a frenzy over unsubstantiated facts, rumors and innuendo.

Are we to believe that any exercise with other agencies is "clearly" meant to do harm to the "average American" because of the political affiliation of this President? But if this was done 10 years ago, would we be concerned?

It's not that having a question is bad, but reading this thread, what concerns me is that no amount of evidence refuting the premise that this exercise is anything out of the ordinary will stem the near-paranoia that keeps us divided. I ask again, aren't' we better than this, especially military service member and veterans? If this freaks us out, how do expect uninformed civilians to react to our hysteria?
(7)
Comment
(0)
show previous comments
LT Charles Baird
>1 y
LTC (Join to see) ; Sir, while you may not give much credence to Dave Hodges what I can attest to based on what friends and family are telling me is that the military and DHS are currently in Midland, Texas utilizing the Walmart (as his report states); that a friend of my wife went to this exact Walmart to pick up a prescription the day it closed and was escorted to the pharmacy and directly out of the store by military personnel (not standard security guard type). And as stated in my previous post a person my wife knows has had the Army parking their helicopters on her personal property without approval of the land owner.

In my 29 years of service, I personally cannot recall a time when the Army or any branch of the military has parked any of their vehicles on private property without the consent of the landowner; especially for a training mission.
(0)
Reply
(0)
LT Charles Baird
>1 y
I will no longer comment on Jade Helm; we will just see how it plays out; and I hope it is nothing. Good day.
(0)
Reply
(0)
COL (Join to see)
>1 y
Hmmmmmmmmmm......
(0)
Reply
(0)
LTC Bink Romanick
>1 y 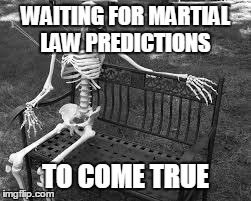