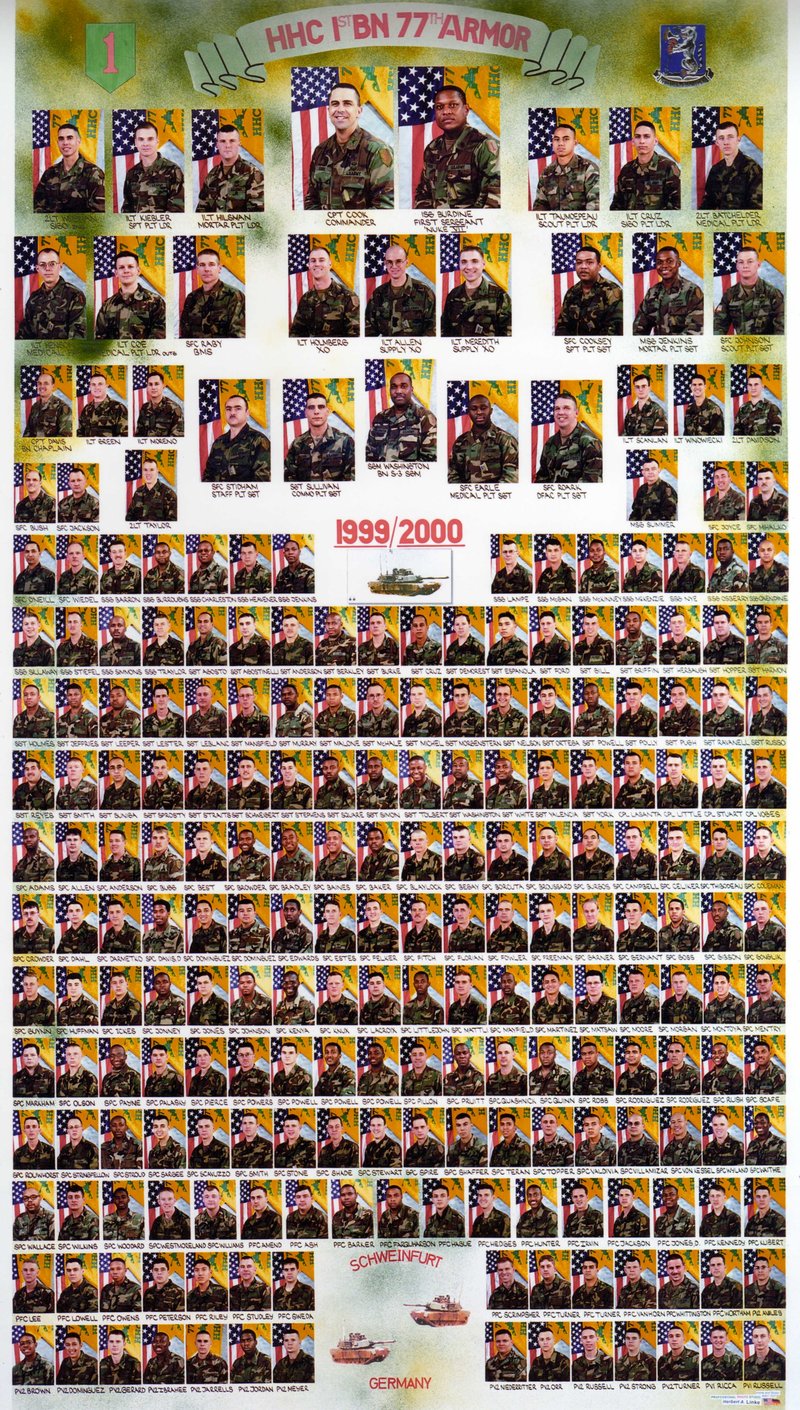 I am in DESPERATE need of finding people from the 1/77 (Alpha CO. Attached) who serve in the year 2000 when 1/77 was in Germany.
If ANYONE served with 1/77 under these specifics, or knows someone who HAS served with these specifics... I NEED the following ASAP (as in before September, 2019) :

I have to find the following people in order to process a V.A. Appeal of an active claim lasting over 19 years (and 2 prison sentences). The following ranks and names are as of circa 2000, and all from 1/77 AR BN in Schweinfurt, Germany :

I have tried EVERYTHING to process my v.a. claim, and have failed repeatedly meeting a stupid as hell brick wall. The v.a. refuses to acknowledge that the same tank accident I get disability for ALSO gave me PTSD, stress, anxiety, or any other mental issue(s). I have been to prison 2 times over this, been denied help to the point I have attempted suicide, and a lot more. I NEED help, and I am out of options. Unless I can get social media help and find people who know about my tank accident in Germany and can write a letter to the v.a. stating that I was in fact messed up by it, I can not move forward with my claim and get help I have needed for the last 19 years of my life.

In about the 3rd quarter of 2000 I was involved in a training exercise using miles gear in Hoenfels, Germany. During this Exercise, I was involved in a triple M88 convoy accident which injured me. Not knowing this, I aided in the heat injury treatment of another soldier forgotten by his unit which our convoy accident alerted to our presence. After this, I repaired equipment and injured myself further not realizing I was injured already.

After returning to Schweinfurt, Germany from miles gear exercises, I learned from Sgt Danny Hopper (my direct Sgt) that he was ALSO involved in an accident the same day. As described to me from him : A 5-ton truck was not parked properly on a hill with Sgt Hopper inside. The driver of the vehicle, released all the air valves removing pressurized air from the 5-tons break canisters. The driver, then entered the vehicle cab and caused the vehicle to begin moving and roll out of control downhill and ramming the back of a M113A2 while the crew was inside preparing to eat MRE's. During the downhill ride, Sgt Hopper was covered in vehicle parts and other detritus inside the van body of the 5-ton. At the vehicles resting point, a unnamed E8 approached the 5-ton and yanked Sgt Hopper out of the tank parts without doing a wellness check, and then ordered a medivac chopper to LAND for 45 minutes (apparently against regs).

I truly hope that this information is enough to get me SOME sort of help from the public. If you read this, please pass it on to anyone you think might be able to help. I am including photos of 1/77 personnel that includes SOME of the names I listed above. I hope it helps.

PLEASE help me with this, as it is desperately important. I am VERY tired of meeting brick walls, being suicidal, being denied treatment I need, getting in trouble with the law, and many many other things. I am NOT the person this country has me listed as, and its ALL because I can't get any damned help to be normal again. I don't know how many ways I can say the same damned thing.. BUT.. NO, i was NOT in war. I was injured in a training accident. I am not a golden boy of the military that the press should swoon over. I am just an average, and very fucked up person trying to be normal in a give-fuck world. I have not felt right in my head since my tank accident, and I have fought like hell for 19 damned years to tell people over and damned over again how screwed I am only to be ignored and treated like filth ended in suicide attempts (one of which caused the death of an innocent man which I fucking hate to hell and back).

I want my life back. PLEASE, for the love of all that is good... SOMEONE care enough to help me for ONCE.... I have no idea how much fight I have left in me at this point. I am desperate, I am cranky, I am revengeful, and a lot more. I am NOT myself, and if this fails.. I feel I am truly lost.

Lt Col Jim Coe
Posted >1 y ago
you could try social media. Search for each unit member on Facebook, Instagram, or maybe twitter. If a likely person is located, send them a message.
(0)
Comment
(0)
PV2 Duane Schlender
>1 y
I did that, the 1/77 will not respond back. Nobody who served with the 1/77 will talk to me. AND on top of all that, when I called Ft Bliss yesterday, I was handed over to some Sgt who told me "we don't have records from 19 years ago. try social media". this is post is my last ditch effort.. its all that is left.
I even have a veteran friend who says whoever I spoke to on the phone is full of shit because he says he can call a unit and find someone with no issues like I have been face slapped with.
I am at a loss as to what to do.
(0)
Reply
(0)
0
0
0

1SG (Join to see)
Posted >1 y ago
Facebook will likely be your friend in finding people. There are lots of groups out there for different units. I was in Schweinfurt at the same time but I was jn 1-4 CAV.

For members of the "Steel Tigers" stationed in Schweinfurt, Germany