How do we heal after the Ferguson grand jury decision? 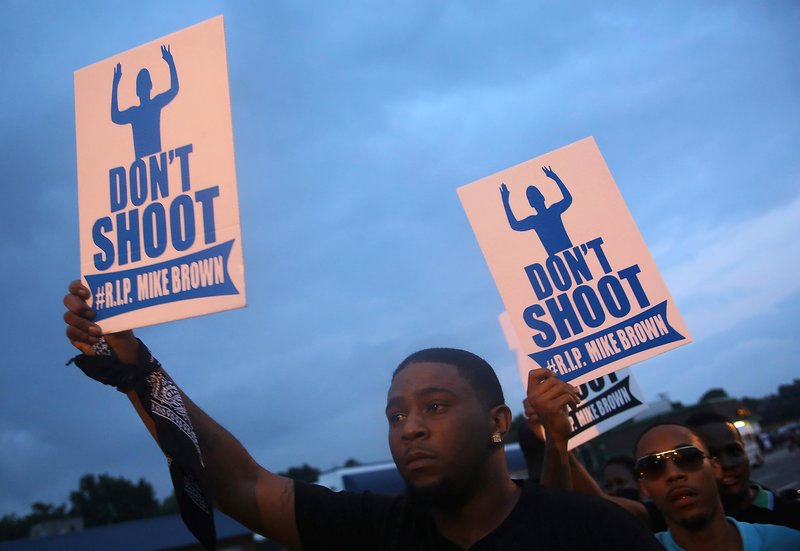 Whether you feel that the grand jury's decision to not prosecute the police officer was correct or not how do you think that that community and us as a nation can move forward and heal?
Posted in these groups:

SMSgt Dr. G. A. Thomas
Posted 7 y ago
Until the black leaders can get a grip on this looting, chaos and burning down their own neighborhoods and homes, more riots are going to be used and continue to be useless. Leaders must find a way to educate their people instead of placating them for votes. Keep Al Sharpton and those with hidden agendas out of these areas and arrest them for inciting a riot.
(65)
Comment
(1)
show previous comments
GySgt William Hardy
7 y
I can see from your posts that you have it fixed in your head that the cops are the bad guys and you are determined to prove that there is some conspiracy theory that the cops are trying to keep up the unrest. I don't believe it for a minute in the Ferguson case. Now if you want to get all over the cops, there are many valid reports of police corruption coming out of Ohio. Check those out, but stop trying to make more out of Ferguson than there is.
(2)
Reply
(0)
PFC (Join to see)
7 y
I'm a young black male and I do not agree with looting and violent rioting BUT in these communities our voices are not being heard and their is police corruption and brutality everyday all day! The black people of Ferguson feel like that's the only way they can actually be heard and also don't let the media fool you. All those fires were not started by looters or rioters.
(1)
Reply
(0)
SMSgt Dr. G. A. Thomas
7 y
PFC William Rufus,

I can't attest to the facts of fires being started by whom however, I was a preacher in that area between 2005-2007 and the people there are good people however, so were the police.

The "outsiders" on the other hand, are very capable of these atrocities. Their voices are heard but by the wrong people. Those who are opportunistic and manipulate the locals. Sharpton and his followers are not really concerned about anything or anyone who cannot advance their cause and line their pockets.
(1)
Reply
(0)
Cadet LT (Join to see)
7 y
We all need to take a step back and look at the situation from the others living in the area. That is where i get my resources from. Not main stream media that is so easily deceitful. I'm not saying all cops are bad. I'm just saying. We as a nation need to look at the facts. We all as individuals need to do what is righteous. No matter the consequences. It may not be affecting anybody here personally but it is affecting our nation. My brothers and sisters in arms protecting the distraught city. They are affected! Good and bad are on both sides. I'm making my voice known that i believe the good should stand against the bad no matter what, what side or color ext. I also believe there is more good people on earth then bad ones. We just turn the other cheek on everything to protect our security for our future. As long as we don't get fixed to live like them. I'm fed up from the bad on both sides. This needs to stop! Who is gong to do it?
(3)
Reply
(0)
45
45
0

SSG (Join to see)
Posted 7 y ago
As much as I'd like for the country to move forward, I know it won't. There are way too many people who see things through the prism of color, sex, or ethnicity to even let things go so that we can thrive. Hate will never end as long as people refuse to be accountable as well as hold others accountable.
(45)
Comment
(0)
show previous comments
PO1 (Join to see)
7 y
Wisdom. Or a lack thereof. Wisdom to see beyond one's ethnicity. Wisdom to voice protests in a civilized manner. Wisdom to realize one's actions and their impacts on others. Until we as society grow in such wisdom, exercise self-control, and educate our future, all we can do is brace ourselves and show love to those around with hopes of love in return. RIP Michael Brown
(2)
Reply
(0)
GySgt William Hardy
7 y
I am pro-gun and I have also contributed to Ben Carson's campaign. He is an independent, but he also understands that at this time in history he doesn't stand a chance of being nominated and elected president unless he aligns himself with the Republican Party. Of all the candidates who may run, I see him as being the best choice at this time. It would be nice to have a fresher face in Washington.
(2)
Reply
(0)
SGT (Join to see)
7 y
PO1 (Join to see), maybe if these communities embraced this philosophy before tragedy, Americans wouldn't be hearing about it now. Nobody gives a damn about Michael Brown, as a person. Society doesn't know anything about this guy, and collectively, we don't care. Call a spade a spade. He was a thug who decided that the law didn't apply to him. The media has taken an idea and run with it, using this loser's name as a symbol of systematic prejudice, rather than a consequence of a broken, unequal, individualistic society.
(3)
Reply
(0)
PVT Raymond Lopez
>1 y
GySgt William Hardy - To quote Forrest Gump "stupid is as stupid does!!"
(0)
Reply
(0)
34
34
0

SPC(P) Jay Heenan
Posted 7 y ago
Healing is a great term! Unfortunately, healing does not sell news papers and commercial spots. Healing also does not allow people to hold themselves accountable. Ferguson will heal as soon as the media leaves. I don't understand 'protesting' a 'crime' by committing crimes...
(34)
Comment
(0)
show previous comments
SSG(P) (Join to see)
7 y
If it bleeds, it reads...Misery loves company. So true and yet so sad.
(4)
Reply
(0)
SSG(P) (Join to see)
7 y
As long as there is racial tension that divides us as a species, there will discontent and a disconnect. We all need to identify what our brothers and sisters are going through before we can fix it. The huge economic divide plays a small role as well. That isn't going to fix itself, but I think slowly eliminating the welfare system would force many folks on the govt dole to find work, which would grow this country.
(2)
Reply
(0)
SGT Michael Glenn
7 y
I have seen a few news clips of blacks getting in other blacks faces at these riots and telling them to get their heads out to the point where it almost got ugly.I totaly respect people like this who arent afraid to stand up, be different than a good portion and speak their minds.I think I would have gotten myself in trouble by going to the person I am referring to and giving him a hug.
(2)
Reply
(0)
Capt Jeff S.
7 y

ST. LOUIS, Mo. – A man from the Canfield Green Apartments is being called an unsung hero in Ferguson after he stood up to a group of looters, and made them s...