Is this an example of Peaceful Muslims? 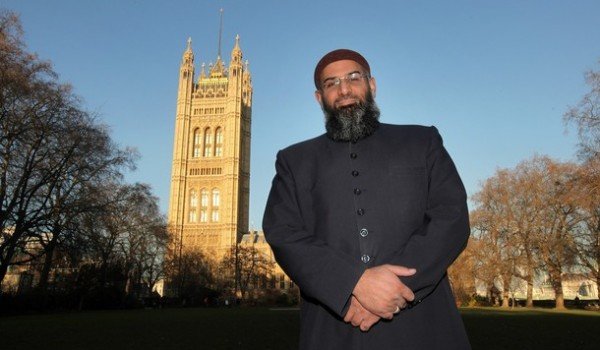 This is the religion of peace?
Posted in these groups:

CPT (Join to see)
Posted >1 y ago
I will just say I am getting tired of religious discussions. This is more of a statement saying that they are not peaceful at all. What about the Christians that have killed others. In my home state we recently had three Muslim college students killed. They were peaceful. But we try to vilify Muslims.

It is a Religion. And I have known many Muslims that only wish good upon me. I have worked with them and still do. Just because some are abusing Islam doesn't mean they are all bad. Christians don't exactly have the cleanest record either.

I am more concerned about gangs and criminals than Islam. I only hope for day that we can see eye to eye with an Muslim and work together for the great good. A question like this isn't helping with this and only puts divide in building that unity.
(15)
Comment
(0)
show previous comments
SSgt (Join to see)
>1 y
You see Muslims doing inexplicably mean things to innocent people and there is no way you can correlate this to things like the Crusades.
(0)
Reply
(0)
MSG David Chappell
>1 y
Cpt farid there is no such thing as islamophibia it is islamafact. You accuse me of ignorance yet you don't know Islamic law. Reliance of the travelor (not misspelled) is the academic approved book for all Islamic law it is approved by every scholar and major university for Islam in the world.
H8.17: Those Fighting for Allah

The seventh category is those fighting for Allah, meaning people engaged in Islamic military operations for whom no salary has been allotted in the army roster (O: but who are volunteers for jihad without remuneration). They are given enough to suffice them for the operation, even if affluent; of weapons, mounts, clothing, and expenses (O: for the duration of the journey, round trip, and the time they spend there, even if prolonged.
(0)
Reply
(0)
CPT (Join to see)
>1 y
SSgt (Join to see) MSG David Chappell CPT Ahmed Faried I think we can all agree that there are shitheads in every group. We have worthless Americans that really don't do anything and destroy. I am Portuguese. We were a main player in the slave trade. We colonized African and sold of their people. You know that was pretty shitty to be honest. I am not Proud of this. But I have nothing to do with that. If you were to call me a name based on something another Portuguese guy did it wouldn't be fair. It is the same for Cristiano Ronaldo. He is one of the best soccer players of all time but I can't play soccer at all.

Americans pretty much wiped out the Indians. It really happened but is it fair to call all of us in the military murders. Nope. We didn't do it. Even in modern day times it happens. If you ever want to read about some of the atrocious acts of US soldiers you should read Black Hearts. It is chilling to see what crimes they commented. But they did comment crimes. It is a fact. So are we rapists and murders as well.

We don't come together doing this. If you have a Country that is an ally like Jordan and call them terrorists and ignore them what do you think is going to happen. This is on par with calling every African American a gang member. It is a fact that African Americans kill another more than any other race. But you just can't say that all of them are bad.

It is all fine and dandy until you are put into a group that is being blasted. I have seen my share of this and will confront it. My father isn't American, he wasn't a citizen when I was born. I was grown by the time he became one. But too often I have seen this brush applied. I have even subject to this. It is ridiculous. Some times I am not American enough or that I am too Hispanic. Keep in mind Portuguese are even Hispanic. But that damn brush is pretty wide.

We have to be subjective. Jordan is an ally. So is Kuwait. There are many more countries to that help us. But we don't want to cast all Muslims as allies. Why not? It is a FACT as you say. They are allies. But instead we focus on the bad. By doing this I can also say any you are a Angry Right Wing Ultra Conservative Gunner Loving Nut. There are some out there like that but not all of them. It would be foolish to say all of them are like that. But then we all choose our facts.
(1)
Reply
(0)
CPT Ahmed Faried
>1 y
lol not sure if my name was spelled that way to make it "more muslim" @ MSG David Chappell but I'll disregard. But to address your point I'm not sure what this Islamic law is. To be sure it sounds ominous to those who thrive on the fear-based reporting of some political news organizations. But i'll present one last rebuttal since I'm sure you are convinced all muslims are evil and not willing to have your perspetive changed. So assuming that Islamic law exists it'd be applied to every muslim country then right? Let's look at the most populous Islamic country, Indonesia. It turns out it is a democracy. Islamic law would have made it a theocracy. We take a look at the least populous Islamic country, the Maldives, and happens to be a Presidential Republic, again not a theocracy. You can point to outliers like Saudi Arabia and its barbaric system of government but the combined population of even the most conservative of these lslamic countries, the ones who govern by their warped interpretation of the Quran, is still tiny compared to the overall global muslim population. And finally your musings on Jihad attributed to "every scholar and major university for Islam in the world. ", there are different kinds of jihad. Jihad of the sword, which in the truest sense is taking up arms in defense of one's religion. There is no true muslim who will wage Jihad in an offensive capacity. Without a doubt some do so, because they don't understand their faith, are intentionally misusing it to justify their actions or are "brainwashed" into doing so by some of the extremely conservative madrassas in places like Pakistan and Saudi Arabia. But I say again, no true muslim wages an offensive Jihad. Secondly, there is Jihad of one's self. This Jihad is a struggle for one to improve themselves and get spiritually closer to their God. It is this Jihad that the Quran lists as most important. But because most media generate revenue based on what catches the eye and ears guess which Jihad they focus on? I know there are some who can't be convinced otherwise that not all muslims are the caricatures presented by the idiots wreaking havoc in the M.E, shooting folks exercising their First Amendment rights in Texas or Paris and the numerous other examples. I get that. But consider the fact that there are upwards of 1.7 billion muslims on this planet and the percentage of shitbags that claim to do their evil in the name of Islam is not even 1 percent. To close, I list some final facts:

-True Jihad is not a violent concept (it is proscribed only to be used in the defensive)
-Jihad is not a declaration of war against other religions. It is worth noting that the Quran specifically refers to Jews and Christians as "people of the book" who should be protected and respected.
-All three faiths worship the same God. Allah is just the Arabic word for God, and is used by Christian Arabs as well as Muslims.
-Military action in the name of Islam has not been common in the history of Islam. Scholars says most calls for violent jihad are not sanctioned by Islam.
-Warfare in the name of God is not unique to Islam. Other faiths throughout the world have waged wars with religious justifications

GySgt Wayne A. Ekblad
Edited >1 y ago
Posted >1 y ago
To be perfectly honest, I just don't know anymore.
(3)
Comment
(0)
show previous comments
SSgt (Join to see)
>1 y
PC is thwarting unity and I just wish this kind of hyperbole goes away.
(0)
Reply
(0)
SGT Anthony Bussing
>1 y
im just curious...how many on here have actually served, side by side, in a combat environment with Muslims? for 7 1/2 months of the 12 I was in iraq, I was on a MiTT team, embedded with the IA...worked, ate, fought and lived with them....the typical muslim, as portrayed in the not so main stream media (info wars, bill o riley, hannity, briitbart etc) are not knife wielding, gun slinging anti americans....educate your selves people...ssgt ol...dont sweat dude, ISIS is NOT camped out in mexico, just waiting to get ya...
(0)
Reply
(0)
SSgt (Join to see)
>1 y
No Muslims do a pretty good job of showing how these elements inside the faith work.
(0)
Reply
(0)
SGT Anthony Bussing
>1 y
just like our christian terrorists do, too...right?
(0)
Reply
(0)
2
2
0

Capt (Join to see)
Posted >1 y ago
I didn't vote because I am not in agreement of any of the choices.

There seems to be several things going on here. One a shop advertises something that seem they deviate from.

The solution seems oppressive and I agree with others that such oppression is not what a religion should practice. I also agree that almost every religion does in some instances. I guess that shows we are human.

My observation is that each group cries foul at the actions of the others. While at the same time do those same actions to the others.

Once again exaggerations of mine, and demonizing of yours.
(2)
Comment
(0)
SSgt (Join to see)
>1 y
Ok but to trash their restaurant? You see that is where the smell test comes in here.
(0)
Reply
(0)
Capt (Join to see)
>1 y
The trashing of the restaurant is simply wrong. Those doing so are simply wrong and are thugs. The message sent - you must comply with what I believe. Also wrong.

And, advertising that you are (insert whatever you want) and then not doing what you advertised also wrong.
(1)
Reply
(0)
Show More Comments
Read This Next
RallyPoint Home