On this day in Military History - 14 October 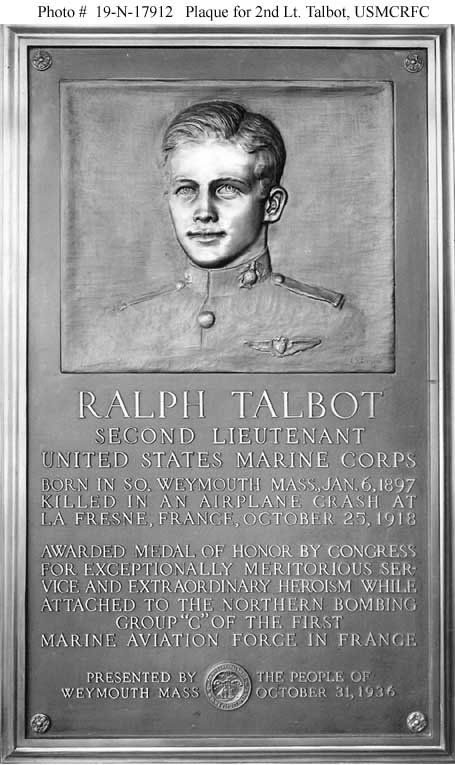 Ralph Talbot was born on 6 January 1897 in South Weymouth, Massaschusetts. He attended Yale University and the Dupont Aviation School (located at Wilmington, Delaware) before joining the U.S. Navy in November 1917. After ground school training at the Massachusetts Institute of Technology in Cambridge, Massachusetts and flight training at Key West, Florida, he was commissioned as a Navy Ensign in April 1918. A month later, he was transferred to the U.S. Marine Corps Reserve Flying Corps as a Second Lieutenant. Talbot served with Squadron C, First Marine Corps Aviation Force in France during the summer and early autumn of 1918. On 8 October, while on an air raid with his observer, Gunnery Sergeant Robert G. Robinson, USMC, they shot down one of the nine enemy scouts that attacked their bombing group. On 14 October 1918 over Pittham, Belgium, their plane, along with another, became separated from their formation and were attacked by 12 enemy scouts. During the ensuing fight, Robinson was severely injured by enemy fire and collapsed. With his observer unconscious and his motor failing, Talbot shot down another enemy plane. He then flew to the nearest hospital to leave Robinson for treatment. Second Lieutenant Ralph Talbot was killed in a test flight on 25 October. For his "exceptionally meritorious service and extraordinary heroism" in the aerial battles of 8 and 14 October 1918, he was posthumously awarded the Medal of Honor. Robert Talbot was initially interred in France, but his remains were later brought home and are now buried in Mount Wollaston Cemetery, Quincy, Massachusetts.
Citation: http://projects.militarytimes.com/citations-medals-awards/recipient.php?recipientid=2613

Robert Guy Robinson was born on 30 April 1896 in Wayne, Michigan. In May 1917, soon after the United States entered World War I, he enlisted in the U.S. Marine Corps and was later promoted to the rank of Gunnery Sergeant. After arriving in the European war zone, he became an Observer with the First Marine Aviation Force in France. Along with pilot Second Lieutenant Ralph Talbot, USMC, Robinson participated in an air raid on 8 October 1918 and shot down one enemy scout (fighter) plane. During another mission over Pittham, Belgium on 14 October 1918, their plane, along with another, became separated from formation and were attacked by twelve enemy scouts. During this aerial battle, Robinson shot down one enemy fighter plane but then received a severe arm wound. Despite this injury, he cleared a gun jam and fought off the enemy until collapsing from additional bullets wounds. For his "extraordinary heroism" on these occasions, he was awarded the Medal of Honor. In June 1919, Robinson was honorably discharged and simultaneously commissioned as a Second Lieutenant in the U.S. Marine Corps Reserve. Placed on the retired list in May 1923, he was promoted to the retired rank of First Lieutenant in September 1936. Robert G. Robinson died at St. Ignace, Michigan, on 5 October 1974 and is buried in Arlington National Cemetery, Arlington, Virginia.
Citation: http://projects.militarytimes.com/citations-medals-awards/recipient.php?recipientid=2750
Posted in these groups:

1SG (Join to see)
Posted 7 y ago
Sir, I maintain a blog, This Day in US Military History that may be of interest to you.

This Day in U.S. Military History

A day-by-day digest of events regarding all services of the U.S. military. Click HOME from any page to use the Quick Navigation Calendar.

PO1 (Join to see)
Posted 7 y ago
Totally awesome! Thank you for the update!
(0)
Comment
(0)
Read This Next
RallyPoint Home