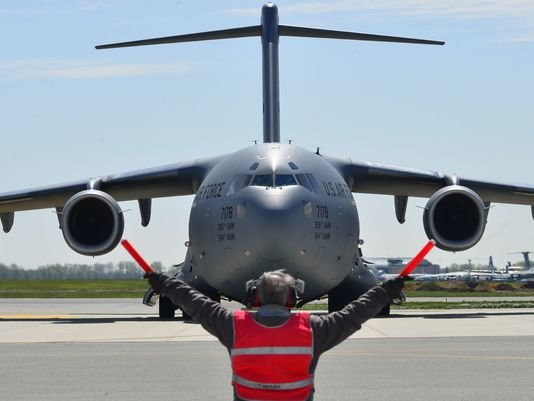 A massive 7.8 magnitude earthquake on April 25 killed thousands of people in Nepal, and the region has been struck by strong aftershocks. The quake triggered an avalanche at Mount Everest that has killed at least 17 climbers, according to the New York Times.

Two Special Forces teams were training in Nepal at the time of the earthquake, Pool told Military Times on April 27. One team was in country for high altitude training, so it is helping find survivors in popular trekking trails, including Mount Everest's bast camp, which was particularly hard hit.

Other members of Special Forces are helping provide medical care to the wounded and setting up tents for survivors, he said.

Meanwhile, the Air Force sent a second C-17 to Nepal with about 50 members of the Los Angeles urban search and rescue team, said Air Force spokeswoman Maj. Melissa Milner. The plane flew from Joint Base Charleston, South Carolina, to March Air Reserve Base, California, to pick up the team and is expected to land in Nepal on Wednesday.

An Air Force C-17 Globemaster took off April 26 from Dover Air Force Base, Delaware, with roughly 70 people, including a Disaster Assistance Response Team from the U.S. Agency for International Development and a rescue team from Fairfax County, Virginia, said Army Col. Steven Warren, a Defense Department spokesman. The flight is expected to arrive April 27 at Tribhuvan International Airport, in the Kathmandu Valley.

All Defense Department personnel who were in Nepal when the earthquake stuck have been accounted for.

Currently, the Defense Department has not been asked to provide any further support, a Defense Department official said. But leaders at U.S. Pacific Command have issued a warning order to component commanders to stand ready to provide humanitarian assistance and disaster relief missions, said Marine Capt. Maureen Krebs, a spokeswoman and the Pentagon.

Tens of thousands of Marines are currently forward deployed in the Asia-Pacific region, with most based in Okinawa, Japan. The 31st Marine Expeditionary Force there serves as ready force to conduct humanitarian missions. The MEU, which comprises about 2,200 Marines and sailors, has responded to other natural disasters in the region including the massive 2011 earthquake and tsunami in Japan, and the deadly 2013 typhoon in the Philippines.

SFC(P) Aaron Fore
Posted >1 y ago
Awsome news. No other country does as much as the USA in sending help where it is needed. I wish for the opportunity to go as well.
(1)
Comment
(0)
Show More Comments
Read This Next
RallyPoint Home