Tattoo update: Your ink record will remain on file 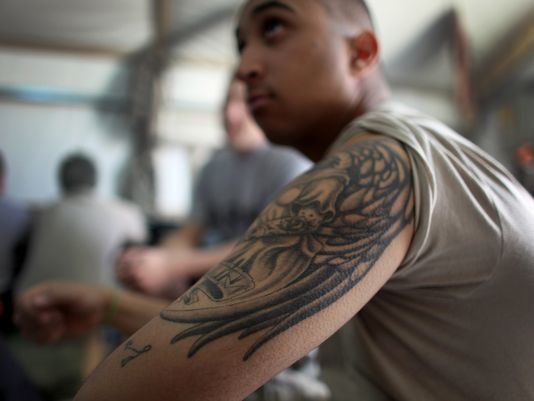 The Army's strict tattoo policy may have gone away, but the memos documenting your tattoos have not.

The Army in April released an update to Army Regulation 670-1 that effectively reversed a year-old tattoo policy that limited the number and size of tattoos soldiers could have below their elbows and knees.

The more restrictive policy was highly unpopular among soldiers, and the recent change, which essentially allows soldiers to have ink on their arms and legs as long as it isn't visible in the Army Service Uniform, was celebrated across the ranks.

Soldiers are still not allowed to have tattoos on their neck, head, face, wrists or hands. The exception is a ring tattoo on each hand. Also banned are tattoos that are sexist, racist, extremist and derogatory.

The new policy also eliminated the need for commanders to annually check and document their soldiers' tattoos. These tattoo validation memos were completed last year, when the previous version of AR 670-1 was in effect.

"There is no longer a need or requirement to grandfather tattoos," said Paul Prince, an Army spokesman.

The Army has no intention, however, to delete the existing documentation from the interactive Personnel Electronic Records Management System, or iPERMS, the collecting house for all of an individual soldier's records. It's Army policy to never delete such documents from the system, Prince said.

That means all documentation for "previously approved exceptions to policy and those who still need their grandfathering memos, for example soldiers with grandfathered neck or hand tattoos, must remain on file," Prince explained.

If you're concerned, Prince stressed those records will not be used against a soldier in any way.

"These documents are not seen by any selection board and have no bearing on personnel actions," he said.

Commanders will continue to perform "annual tattoo checks for new tattoos above the neckline, on the wrists or hands, or tattoos considered extremist, indecent, sexist or racist," Prince said.

The old tattoo policy limited to four the number of tattoos soldiers could have below the elbow and knee. It also limited the size of the tattoos to the wearer's hand.

The regulation also initially barred soldiers who ran afoul of the rules from requesting a commission, sparking anger among many soldiers. A September update grandfathered enlisted seeking a commission or appointment, as long as they have their commander's endorsement.

The new tattoo policy allows the Army to balance recruiting and retention needs. Sergeant Major of the Army Dan Dailey has said he did not want tattoo restrictions to drive good soldiers out, or prevent solid recruits from joining the force.

"I don't think there was any wrong in the past, I was part of the previous decision, too," Dailey has said. "We had gotten too far out of the regulation, but I think what we're doing is appropriate with regards to maintaining the trust and confidence of the American people and maintaining discipline and standards in our great Army."

SPC Kevin Schober
Posted >1 y ago
I would rather have someone covered in ink by my side that is willing to fight and die along side of me than someone that is not willing to but looks very professional. Just because a guy or gal has a full back piece or a sleeve of tats on their arm or back does not affect how they do their job . I agree if the tattoo is not visible while in uniform it should not be an issue and it in now way determines if someone can act professional in a job. I have seen many clean cut young people with no tats fail miserably at being professional at their jobs.Todays society has accepted tattoos completely in the younger generations and that is in fact where all new recruits are coming from. If we want good patriotic men and women to join todays Military then the regs. must change with the times when it comes to something as harmless as tattoos. I agree with the New standards they just adopted because the ones they attempted to use for the past year or so scared off many good men and women and I would love to see the numbers of how many soldiers that had over 10 years of service left during that year due to this failed policy. Who cares if they kept the records of existing tats because that may be what identifies a soldier someday and returns them home to a loved one to give a family closure just like dental records do.
(12)
Comment
(0)
SSG Marciano Gonzalez
>1 y
Tattoos don't bother me when I was in service,I told my soldiers that tattoos become a problem when it keep them from performing their duties and they need to go on sick call because of an infection that requires quarters and they cant do their jobs don't matter how many days then tattoos are a problem.
(2)
Reply
(0)
SPC James Lewis
>1 y
I agree,tattoos have become more popular in todays culture.The Military has always had soldiers with tattoos throughout modern history,and does not reflect if the soldier can do his or her job.I agree that tattoos on the head and face look unprofessional when wearing the military uniform.The Military should keep the record of your tattoos on file and stay updated on the number of and what they look like to help I.D. the person if need be.
(0)
Reply
(0)
4
4
0

CPT(P) (Join to see)
Posted >1 y ago
Army Times must be short on stories. They keep reaching into the tattoo bag and pulling out irrelevant stories that stir the pot.
(4)
Comment
(0)
SPC Donald Moore
>1 y
Maybe it was a slow news day. Hopefully it helped someone understand the policy change because I am sure that there was someone out there that didn't understand.
(0)
Reply
(0)
SPC Ken Sawyer
>1 y
I got my first tattoo just outside of Ft Lost in the woods lol
at roses tattoo palor. I would like to think that the Army has more to do than worry about tattoos.
(2)
Reply
(0)
4
4
0

SPC Chad Kolod
Posted >1 y ago
I can understand why they had the tattoo policy. We want a professional army, and to be professional, in general, you must look professional. At the same time, as long as the uniform cover's the tattoo there should be no reason why you couldn't get more. It's like having a beard while in theatre. Should your priority lie so much in appearance while your also fighting for you life. I say yes because you are also trying to win the support of the locals. When they see clean cut, uniform looking men and woman it inspires confide and the perception of respectable professionals. And we all know perception is everything. Even if I am a huge advocate of tattoos and beards.
(4)
Comment
(0)
CW3 (Join to see)
>1 y
Actually, when the locals in Afghanistan see a clean-cut soldier, they don't think of him as an adult, and therefore don't respect him.
(5)
Reply
(0)
SPC Chad Kolod
>1 y
Thank you for that information. I didn't realize that.
(0)
Reply
(0)
Show More Comments
Read This Next
RallyPoint Home