What The Cluck? Popeye's Chicken Manager Fired After She Refuses To Pay Back $400 Taken By Armed Robber. Is This Fair? 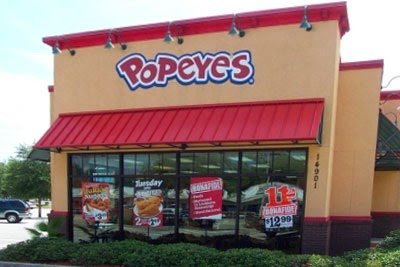 A Houston-area manager of a Popeye's Fried Chicken restaurant has been fired after refusing to payback the $400.00 she was forced to hand over during an armed robbery. Is this fair?
Posted in these groups: Popeyes Louisiana Kitchen
Posted >1 y ago
Responses: 35
12
12
0

SPC David Stephenson
Edited >1 y ago
Posted >1 y ago
As this was in Texas, where ever one is packing, don't see how this cowboy didn't end up eating lead.

However she needs to get a lawyer and sue the owner for workers comp as she has suffered psych trauma in fearing of losing her unborn baby as well as her own life. Sue for a $1,000,000 minus the $400 in question. Hopefully this will strike some reasoning in the owner.
(12)
Comment
(0)
SSG (Join to see)
>1 y
Unfortunately taking someone to court when you can't afford next months rent isn't always possible.
(1)
Reply
(0)
SPC David Stephenson
>1 y
I'm sure some lawyer will do pro bono for a third. I'm sure by now she's being represented by an attorney.
(1)
Reply
(0)
SPC David Stephenson
>1 y
Open carry of handguns is not allowed but a long rifle is not a problem. Open carry of firearms in Louisiana is permitted without a permit, as long as the user is of at least 17 years of age and legally able to possess a firearm under state and federal law. Louisiana has state preemption of firearms laws, except for local laws passed before July 15, 1985. Concealed carry permit back in 80's was like $50.
(0)
Reply
(0)
6
6
0

I guess I have mixed emotions about this one... Please bear with me.

She should not be fired for refusing to pay back the money that was stolen in an armed robbery, however, maybe she should have been for failure to follow company policy concerning the amount of money in the registers, thereby failing in her responsibilities as a supervisor. In addition, according to the article, this was not her first offense.

The proximate cause of the money loss was the armed robbery, not her actions, but the proximate cause of the amount of money stolen was her failure to clean out the cash and put it in the safe. Therefore, I think the company was within its right to seek restitution fro her negligence or to terminate her. Bottom line is that she was fired for violation of company policy, not for refusing to repay the money.

Having said that... I think the company should have given her a suspension, not terminate her. I predict they will lose a lot more than $400 over this and that she will get thousands of dollars in donations from across the country; probably more than she would make in a year working there.

Don't you just love it when a story ahs a happy ending? :-) :-)
(6)
Comment
(0)
show previous comments
MSgt Stephan Hall
>1 y
I got robbed while working at a 7-11, thief got $32, Southland Corporation tried to have me reimburse the $32, I was active duty at Camp Lejeune went to Legal Assistance with the matter, never had to pay the money, but I lost my job for failure to support company policies. I didn't get any retribution because I wasn't suppose to moonlighting. Bag of worms
(4)
Reply
(0)
SrA Kelly Richard
>1 y
Wow! I worked at a gas station right before boot camp, and within weeks of me leaving for BMT one of my regulars robbed the place at gunpoint. I thought, what if I was still working there? Or did he wait until I left? I couldn't imagine what I'd do (other than hand it over) if I was in their shoes! And then for them to go after you is just crazy! Do you pay the money because you need the job, or just say no on the principal?
(0)
Reply
(0)
SPC Charles Brown
>1 y
COL Jean (John) F. B., I have a few questions that are pertinent to this topic. I have read the article and nowhere does it say what time the robbery occurred, so I guess question #1 is: was the store still open when this happened? 2: If open how long before closing and locking the doors for the night, I can only assume that the store was still open as there was no mention made of forced entry. 3: If open how busy had they been prior to the robbery?

The reason I ask these questions is because I have worked as a manager in fast food restaurants and know first hand that it isn't always possible to do drawer pulls when there is too much money in the registers during business hours. First offense or not the sop is to give the robber what they want, protect customers and crew from potential injury or death in the event of a robbery, and remember what you can about the person committing the crime to pass the information on to the police.

In the course of my employment as a manager I have had to carry on with business as usual in times when the registers had more than the prescribed amount in them. However, there are or were drop boxes under the registers for the cashiers to place large bills or excess money in to prevent high amounts of money in the tills.
(0)
Reply
(0)
COL Jean (John) F. B.
>1 y
I agree that there is much information that is not readily apparent in the article.

As I stated, I do not think she should have been fired. I do assume, however, (and it may be a bad assumption) that the employer took all the info mentioned in yours and other posts into consideration for extenuation and mitigation and still concluded that she should be terminate.

Much more info is needed to have a definitive position on whether the employer was too heavy-handed, although I think a suspension or reprimand would have been sufficient in this case.

Like I said previously, Popeye's will suffer because of this PR nightmare and the employee will probably come out to the good by donations, television appearances, etc. Some of that has already started...
(0)
Reply
(0)
6
6
0

http://www.wbaltv.com/news/employee-charged-in-brooklyn-park-popeyes-killing/27835372
(0)
Reply
(0)
SPC Angel Guma
>1 y
The truth is stranger than fiction. If only duffel blog had thought of this.
(0)
Reply
(0)
Show More Comments
Read This Next
RallyPoint Home