" About John Donne | Academy of American Poets
John Donne was born in 1572 in London, England. He is known as the founder of the Metaphysical Poets, a term created by Samuel Johnson, an eighteenth-century English essayist, poet, and philosopher. The loosely associated group also includes George Herbert, Richard Crashaw, Andrew Marvell, and John Cleveland. The Metaphysical Poets are known for their ability to startle the reader and coax new perspective through paradoxical images, subtle argument, inventive syntax, and imagery from art, philosophy, and religion using an extended metaphor known as a conceit. Donne reached beyond the rational and hierarchical structures of the seventeenth century with his exacting and ingenious conceits, advancing the exploratory spirit of his time.

Donne entered the world during a period of theological and political unrest for both England and France; a Protestant massacre occurred on Saint Bartholomew's day in France; while in England, the Catholics were the persecuted minority. Born into a Roman Catholic family, Donne's personal relationship with religion was tumultuous and passionate, and at the center of much of his poetry. He studied at both Oxford and Cambridge Universities in his early teen years. He did not take a degree at either school, because to do so would have meant subscribing to the Thirty-nine Articles, the doctrine that defined Anglicanism. At age twenty he studied law at Lincoln's Inn. Two years later he succumbed to religious pressure and joined the Anglican Church after his younger brother, convicted for his Catholic loyalties, died in prison. Donne wrote most of his love lyrics, erotic verse, and some sacred poems in the 1590s, creating two major volumes of work: Satires and Songs and Sonnets.

In 1598, after returning from a two-year naval expedition against Spain, Donne was appointed private secretary to Sir Thomas Egerton. While sitting in Queen Elizabeth's last Parliament in 1601, Donne secretly married Anne More, the sixteen-year-old niece of Lady Egerton. Donne's father-in-law disapproved of the marriage. As punishment, he did not provide a dowry for the couple and had Donne briefly imprisoned.

This left the couple isolated and dependent on friends, relatives, and patrons. Donne suffered social and financial instability in the years following his marriage, exacerbated by the birth of many children. He continued to write and published the Divine Poems in 1607. In Pseudo-Martyr, published in 1610, Donne displayed his extensive knowledge of the laws of the Church and state, arguing that Roman Catholics could support James I without compromising their faith. In 1615, James I pressured him to enter the Anglican Ministry by declaring that Donne could not be employed outside of the Church. He was appointed Royal Chaplain later that year. His wife died in 1617 at thirty-three years old shortly after giving birth to their twelfth child, who was stillborn. The Holy Sonnets are also attributed to this phase of his life.

In 1621, he became dean of Saint Paul's Cathedral. In his later years, Donne's writing reflected his fear of his inevitable death. He wrote his private prayers, Devotions upon Emergent Occasions, during a period of severe illness and published them in 1624. His learned, charismatic, and inventive preaching made him a highly influential presence in London. Best known for his vivacious, compelling style and thorough examination of mortal paradox, John Donne died in London on March 31, 1631." 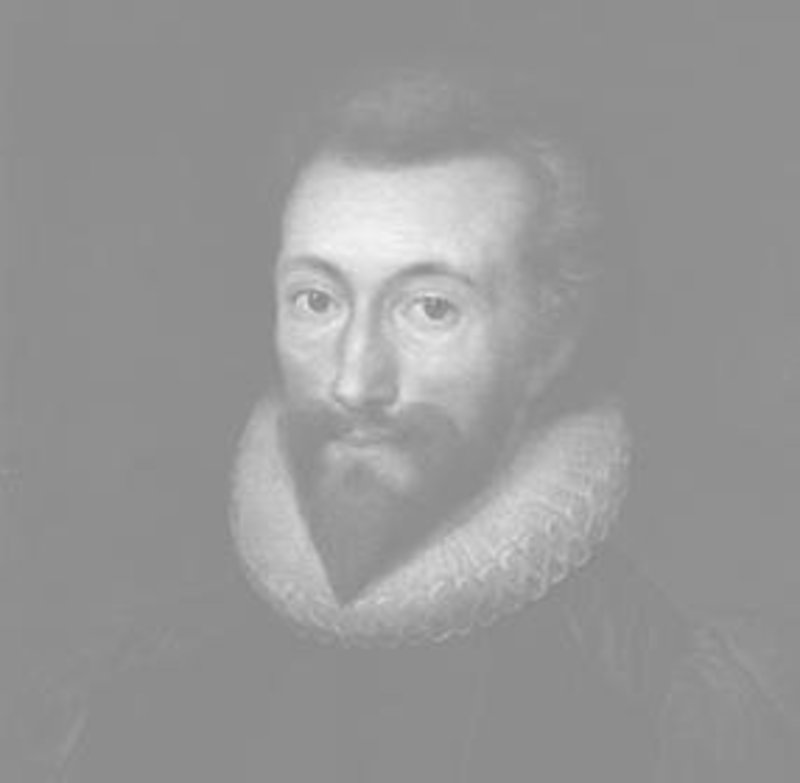 Posted from poets.org
Posted in these groups: 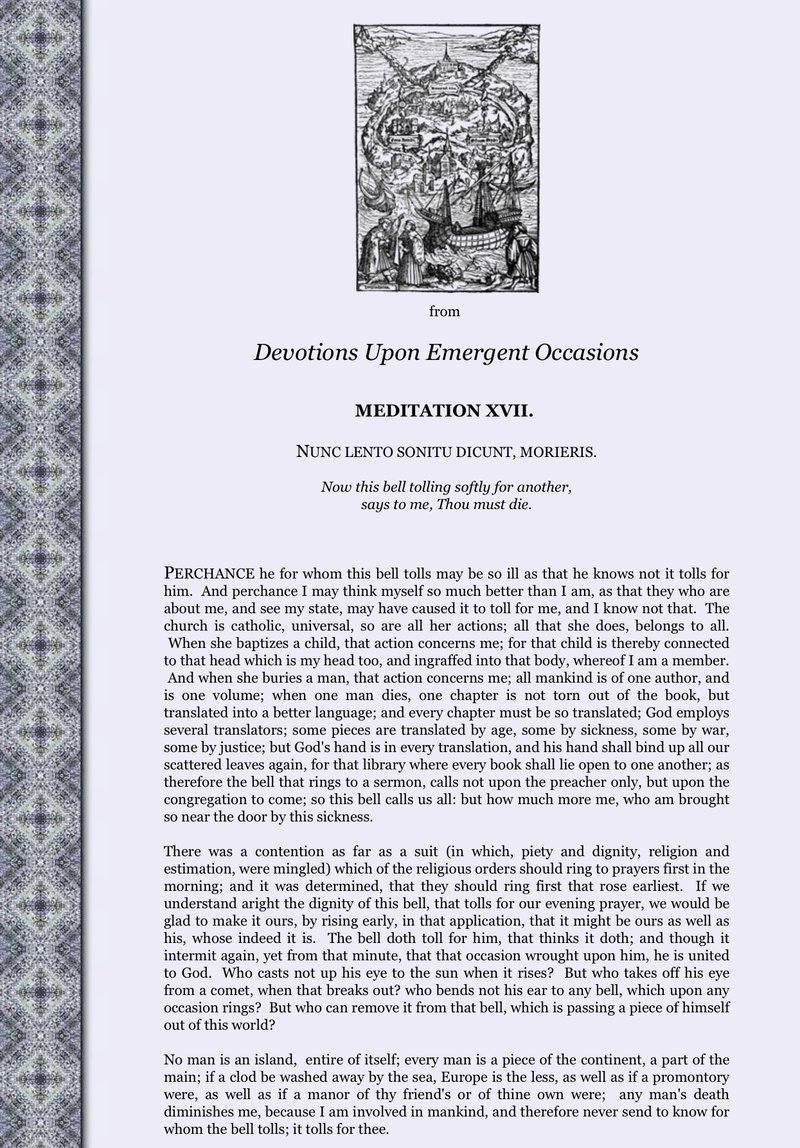 People read John Donne’s words all the time, SGT (Join to see). They just don’t know it!
“No man is an island.” “Ask not for whom the bell tolls. It tolls for thee.” All is from John Donne’s Meditation XVII, a small part of Devotions Upon Emergent Occasions. Here’s the work in its entirety.
CPT (Join to see) Lt Col John (Jack) Christensen SGT Mark Anderson SP5 Mark Kuzinski COL Mikel J. Burroughs
(5)
Comment
(0)
CPT (Join to see)
>1 y

I Am a Rock - Lyrics - Simon and Garfunkel

I Am a Rock is a folk rock song written by Paul Simon. It was first released on The Paul Simon Song Book in 1965 and was later performed by Simon and Garfunk...

LTC Stephen C. I used to teach Meditation XVII. Sometimes I used to share the Simon and Garfunkel song "I Am a Rock" as a counterpoint. Students realized that the song was an ironic play on Donne's prose.