Graham Torches Pelosi: 'Most Shameful, Disgusting Statement By Any Politician In Modern History'

In a CNN interview on Sunday, Speaker Nancy Pelosi (D-CA) blamed the Wuhan coronavirus on President Trump, accusing the president of fiddling while Americans died.

"I don't know what the scientist said to him," Pelosi told CNN's Jake Tapper. "When did the president know about this and what did he know? What did he know and when did he know it? That's for an after-action review. But as the president fiddles, people are dying and we just have to take every precaution."

Pelosi's mention of an after-action review suggests the Democrats may already be mulling their next impeachment witch hunt. The same speaker who was singularly focused on impeaching the president when the coronavirus first made its way over to America said the president's "denial" at the beginning of the outbreak was "deadly."

"She's the first politician to blame another politician for people dying," Sen. Graham continued. "This is the same speaker of the House that held up the bill in the Senate for days because she wanted same-day voting. She wanted carbon neutrality for the airlines. She wanted $75 billion for the endowment for the humanities and $25 million for the Kennedy Center. She is the one that held up the package in the Senate for days to get the Green New Deal put in the recovery package, so it's the most shameful, disgusting thing I've heard yet, and it needs to stop." 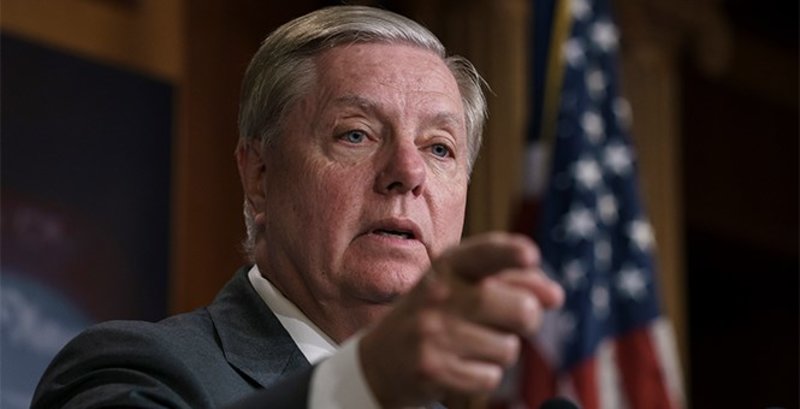 Graham Torches Pelosi: 'Most Shameful, Disgusting Statement By Any Politician In Modern History'

Posted from townhall.com
Posted in these groups:

LTC Stephen F.
Posted >1 y ago
I concur with your assessment, my friend SP5 Mark Kuzinski IMHO speaker Pelosi sank to a new low when she publicly attempted to cast blame on president Donald Trump for the coronavirus 19 infectious spread.
I was explaining to my youngest son that the events of this year will be declassified in 50 years.
a. Presidential decisions take into consideration a range of first, second and hopefully third order effects.
b. President Trump ordered cutting off travel from China to USA long before the threat was known in terms of propagation, range, etc. He understood the economic aspects in terms of trad balance and the vast numbers of Chinese students who come to this nation each year to be educated.
c. Unlike Presidents who believed the government solutions and centralized approaches work best, President Trump has welcomed corporate entrepreneurial efforts to develop solutions to the CORID-19 virus threat. He has delegated the authority to Governors to develop the approaches within their states, (1) while authorizing Federal Emergency declaration; (2) enabling the National Guard to be used within the states at Federal cost; (3) using the Federal stockpile facilities to stock and distribute materiel; (4) encouraging the development and FDA certification of techniques, equipment and medication including vaccine development; and (5) most importantly scrapped and replaced the outdated emergency response capabilities to be able to address and develop real-time remedies to future events of this type.
c.Nancy Pelosi represents San Francisco which has been hit hard by the virus. Hopefully she will reflect on her involvement in San Francisco.
Thank you, my friend Maj Marty Hogan for mentioning me.
What do you think? COL (Join to see) COL Charles Williams LTC John Shaw LTC Wayne Brandon LTC Greg Henning Maj Robert Thornton Maj Bill Smith, Ph.D. Sgt Vance Bonds Sgt Albert Castro COL Mikel J. Burroughs SFC (Join to see) Capt Jeff S. CPT Jack Durish Maj Kim P. SMSgt Lawrence McCarter CPT Paul Whitmer Sgt Kelli Mays SGT Steve McFarland
(12)
Comment
(0)
SP5 Mark Kuzinski
>1 y
Good evening and great comments LTC Stephen F.
(2)
Reply
(0)
Capt Jeff S.
>1 y
Yes, concur with SP5 Mark Kuzinski. Great commentary by LTC Stephen F.. Thanks for sharing!
(2)
Reply
(0)
11
11
0

SSG (Join to see)
Posted >1 y ago
Well not too many people would say Nancy doesn't fit the description. She plays politics instead of working for the people in this time, she would rather spread fear and panic instead of hope. Just a less than desirable person.
(10)
Comment
(0)
show previous comments
Maj John Bell
>1 y

SP5 Mark Kuzinski - Not just anyone keeps voting her into office. He district includes San Francisco. That particular set of Californians has elected officials that established "no arrest" policies encouraging gangs of homeless people to shop lift en masse and created unsanitary streets and sidewalks. Personally I'd feel better about the "5 second rule" in my chicken yard than San Francisco. (See the SF poop map above)
(3)
Reply
(0)
SP5 Mark Kuzinski
>1 y
This woman cannot take care of her own district.
(2)
Reply
(0)
Sgt Vance Bonds
>1 y
SP5 Mark Kuzinski Confusing
(2)
Reply
(0)
GySgt John Hudson
>1 y
Been up there far too long... Time for her to retire somewhere far away.
(1)
Reply
(0)
Show More Comments
Read This Next
RallyPoint Home