PO1 John Miller
4.18K
24
18
6
6
0
NCO Gives Daily 45 Minute Speech on Importance of Not Wasting Time
The headline could be a bit better by saying LPO or Petty Officer instead of NCO. We don't use the term NCO in the Navy.

Secondly, how many of us had LPO's or Chiefs like this? Be honest!

“All right, listen up,” Bernard said at morning quarters, the cue for the designated timekeeper to start the stopwatch. The sources say each week a timekeeper is assigned to track the NCO’s speeches.

“I know you guys could be working harder,” Bernard said. “Remember when there was a real man overboard and you had the rescue boat ready in four minutes? I expect that level of effort from you all the time,” he said.

One anonymous sailor told Duffel Blog, “He seems to think that’s a reasonable expectation. He won’t bother to tell you that he spends most of his day checking email, screwing around, and sitting in the berthing watching soccer games.”

Occasionally, others say, he screws up a subordinate’s work so he could yell at someone for doing it wrong.

Bernard’s commendations have called him “the epitome of Naval leadership.”

A few seamen in the back of the formation had pulled out their bingo cards to check whatever boxes he would hit. Seaman Trip Johnson needed “If you have a problem I’ll settle it with my fists,” and “A Chief from another department walked by shaking his head” for a bingo. “Bernard getting away with disobeying a direct order,” and “Speech went so long the galley closed” were considered free spaces.

“Smoking is a privilege,” Bernard reportedly said. “I don’t mind if you go topside and smoke but when you’re done, you don’t know what’s going on and have to find a supervisor. You’re wandering around for two minutes, and that’s TWO MINUTES,” he is alleged to have shouted, “you could’ve been working. If something is wrong you have to tell us. You can’t pretend everything’s fine. You have to tell us something’s wrong,” Bernard repeated himself several times, getting angrier as he did so.

“Because,” Bernard concluded, “People who stay military for twenty years don’t live as long. Studies show they die younger. It’s a hard life, but someone has to do it. All right, get to work.” The seamen went to work, many saying they felt “motivated by the knowledge that their job was actively killing them.”

Johnson won the “How long will the speech last” pool, coming closest at 42 minutes. Other sailors say Johnson later went double or nothing on Bernard giving the same speech before knockoff. 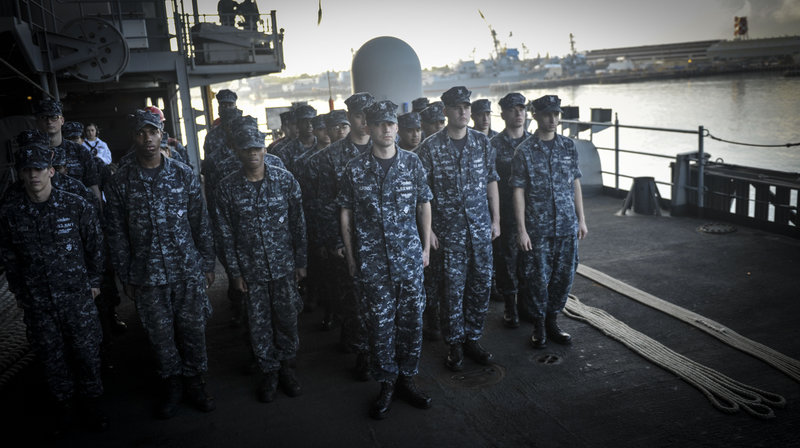 Posted from duffelblog.com
Posted in these groups:

LCDR Rabbah Rona Matlow
Posted >1 y ago
I've heard plenty of Chiefs and LPOs give these kind of talks. I was even accused of it a time or too myself as a Department Head... I always found it amusing the way things were done in the Navy, where we took 10 steps to do one step in PMS, while we tore apart perfectly good working machinery to see why it still worked, often creating problems in the process...
(5)
Comment
(0)
PO1 John Miller
>1 y
LCDR Rabbah Rona Matlow, I know, right??? I never understood why I had to tag out an operational system, take it apart, clean it, put it back together, and then do that (take apart/put back together) 3 or 4 more times until I got the equipment working again!!!
(1)
Reply
(0)
LCDR Rabbah Rona Matlow
>1 y
Yup... I was an MM2 before commissioning. Been there, done that...
(1)
Reply
(0)
1
1
0

PO1 Tony Holland
Posted >1 y ago
When I was aboard the USS Blue Ridge (LCC-19) a fellow PO1 had an absolutely
amazing way of cutting short morning quarters topside in the hot sun. He was able
to fart at will and was so accomplished that he could modulate to play musical tunes.
The Division Officer would wind up his briefings in record time never once
suspecting that it was being done deliberately.
(1)
Comment
(0)
PO1 John Miller
>1 y
PO1 Tony Holland, I hope that First Class went on to make Chief! That is awesome!
(0)
Reply
(0)
1
1
0