New York's worst terror attack before 9/11 was 100 years ago. No one was ever convicted.

"New York's worst terror attack before 9/11 was 100 years ago. No one was ever convicted.

Wall Street in New York City, a global financial center, was once the site of a deadly terror attack — the worst in the city until September 11, 2001.

A century ago, on September 16, 1920 at 12:01 p.m., a bomb that was delivered via dynamite and horse drawn carriage went off at Wall and Broad Street just outside the offices of famed financier J.P. Morgan.

The explosion killed 38 people and seriously injured 143 more. No Wall Street businessmen were killed — the victims were street workers, vendors and clerks, many who were on their way to lunch. J.P. Morgan himself was vacationing in Scotland at the time.

The carnage was unlike anything America's largest city had ever seen, and was splashed across headlines for days.

As those who survived were treated, an investigation was opened with an immediate focus on several radical leftist political groups.

"Even before the Wall Street explosion, there had been nationwide raids on communist headquarters, a result of the general belief that Bolsheviks were plotting to overthrow the government," a newscast said at the time.

Anger over U.S. capitalism and wealth inequality had been growing for decades.

Anarchists from Italy in particular became primary suspects. It was believed they were partly suspected over their frustration about the imprisonment of Italian immigrant anarchists Nicola Sacco and Bartolomeo Vanzetti. The pair had been erroneously convicted of murdering a guard and paymaster while they were carrying out an armed robbery near Boston the year before.

Investigators were puzzled, but their focus soon shifted to Mario Buda, a longtime activist and former associate of Sacco and Vanzetti.

Buda left the country not long after, and in the end, no one was ever formally convicted.

A hundred years later, remnants of the blast can still be seen in the form of shrapnel marks on the facade of J.P. Morgan's old building. 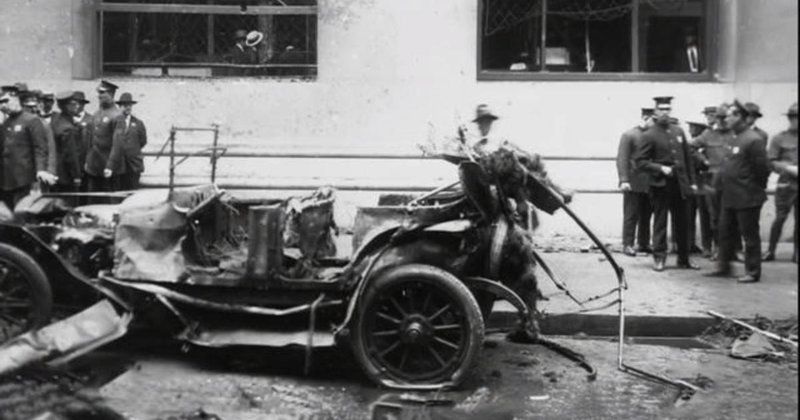 New York's worst terror attack before 9/11 was 100 years ago. No one was ever convicted.

Posted from cbsnews.com
Posted in these groups: