Pompeii was an ancient city in Campania on the Gulf of Naples, which like Herculaneum, Stabiae and Oplontis was buried during the eruption of Vesuvius in 79 AD, but remained largely preserved under the volcanic ashes.[1] In its approximately seven hundred year history Pompeii was inhabited and shaped by Osci, Samnites, Greeks, Etruscans and Romans, but was forgotten after the burial in the course of time. The rediscovery in the 18th century marked the beginning of the city’s second history, in the course of which Pompeii became a central object of archaeology and exploration of the ancient world. Pompeii is one of the best preserved ruined cities of antiquity. Its fate is familiar to many because it is often received in art and literature.

Recent excavations have shown that there was a settlement near today’s city of Nola that had existed since the early 1st millennium BC, which was abandoned at the end of the 7th century BC to move it closer to the estuary. According to mythological tradition, this new settlement – Pompeii – was founded by the demigod Heracles, in reality probably by the Osci. The place name shall be associated with the Oscian word pompe “five”. According to Strabo, the population of the city in historical times consisted of Osci, Etruscans, Pelasgians and Samnites. Nothing is known about the history of the rapidly growing city during the period of conflict between the Greeks and Etruscans in Campania. However, finds have shown that contacts were probably made on both sides, although the relationship with the Etruscans was obviously more significant.Since the late 5th century BC (between 425 BC and 420 BC) Pompeii has been under Samnite rule. In 310 B.C., the city was able to fend off a raid by Roman naval soldiers who were to take over the neighbouring city of Nuceria Alfaterna.

In 290 B.C., Pompeii, like all other Samnite cities, had to join the Roman alliance system. Both during the Samnite Wars and during the War of the Confederates, Pompeii stood on the side of Rome’s opponents. Sulla besieged the city in 89 BC, traces of artillery can still be seen today. Pompeii was finally defeated by the Romans and was transformed into a Roman colony by Sulla in 80 BC. The city was now called Colonia Cornelia Veneria Pompeianorum. About 2000 Roman veterans with their families were apparently settled in a larger closed area in the southwest of the city. In 59 AD, according to a report by historian Tacitus[5], bloody riots with visitors from the neighbouring town of Nuceria took place during a gladiatorial battle in the amphitheatre, which could hold up to 20,000 spectators. Then Emperor Nero forbade any games in Pompeii for ten years.

The population of Pompeii, which in ancient sources was inconsistently referred to as urbs, oppidum or municipium and whose citizens belonged to the tribus Menenia, is estimated at 8,000 to 10,000 inhabitants at the time of the decline. The earthquake of the year 62, which may have been caused by the sacking of a clod of the roof of the hearth or the opening of a crack in the ground, loosened the volcano’s vent plug. The resistance of the magma chamber was reduced in the following years by the enclosed ascending gases and by the steady increase of the vapour pressure in the magma chamber. At noon on 24 August 79, the internal pressure overcame the resistance of the plug, which was suddenly crushed and ejected. Immediately afterwards, huge quantities of pumice stone and ash were ejected in a short time.[1] When Vesuvius had calmed down again after its eighteen-hour eruption, most people in Pompeii had already suffocated or been killed by falling rocks. Nevertheless, some had survived the disaster until that time. The few who were still alive, however, fell victim to pyroclastic flows only a short time later. The most famous victim was the Roman writer Pliny the Elder, who, driven by scientific interest and the desire to help, drove his fleet to the site of the catastrophe.

For over 1500 years Pompeii was buried under a layer of volcanic ash and pumice stone up to 25 metres thick. In addition to Pompeii, the cities of Herculaneum, Stabiae and Oplontis were also completely buried. In the following almost 17 centuries the area of the former town was only sporadically settled. Over the centuries, however, grave robbers had repeatedly searched the easily accessible ruins for valuable pieces and plundered them. In 1592 Domenico Fontana discovered several inscriptions, marble panels, coins and the like during the construction of the canal, but nobody was interested in them. The area was called La Civita – the city – by the locals. A cavalry general, Prince d’Elboeuf, heard about it, bought land on the spot and began with aimless excavations. Among other things, three marble statues – The Herculan Sisters – were found.

On 6 April 1748, the excavations were finally started officially by the Spanish engineering officer Colonel Rocque Joaquín de Alcubierre, who had already excavated treasures in Herculaneum in 1738 and participated in the first excavations of Prince d’Elboeuf in Pompeii, with the permission of the Neapolitan royal house. Initially, however, the excavations had only the aim of recovering special showpieces and valuables. On 20 August 1763 a sign was found with the inscription “[…] Rei Rublicae Pompeianorum […]”. Thus the city was undoubtedly identified as Pompeii. Since 1763 one could also visit the excavation area. Among the first showpieces were the theatre, the Isis temple, the Herculan gate and the Diomedes villa in front of the city.

The Neapolitan kings Charles III and Ferdinand IV claimed the exclusive right to the treasures found. So visitors were forbidden to draw the ruins. Even worse for later research was the fact that both ordered the destruction of murals so that no one could seize them. Only Johann Joachim Winckelmann‘s public protest forced the royal house to abandon this practice.[2] Due to the influence of Winckelmann’s works and the resulting change in consciousness in bourgeois society, the confrontation with the legacies of the Romans was now a confrontation with one’s own European culture. This change began after 1760. From now on antiquity became a kind of ideal. There was great progress in research when the French occupied Naples in 1799 and ruled Italy from 1806 to 1815. The management of the excavations was now in French hands and proceeded according to plan. First, the land on which Pompeii lies was expropriated. At times, up to 700 workers were employed in the excavations during this period. The appointment of Giuseppe Fiorelli as Soprintendente in 1863 marked the beginning of a new era in the exploration of the city.[3] The following twelve years under his leadership were to be formative. In the second half of the 19th century, excavation techniques made great progress. The work became more and more scientific and constantly improved.

The finds from Pompeii can be seen since 1787 in the Museo Archeologico Nazionale in Naples, newer finds also on site in the Antiquarium. In recent years, many assumptions about Pompeii have turned out to be false due to recent research. Thus the often spread statement that with Pompeii one has a representative Roman city in front of one, which was “sealed” in the middle of one’s life, is not tenable. Already from Roman times, findings were altered by robber excavations and found objects were removed. This has contributed to the falsification of the findings as well as the distribution of the excavated material of the first hundred years on the surrounding countryside or even in the previously excavated houses. Since at first they were only looking for representative pieces, they are found in places to which they do not belong originally. The inhabitants of Pompeii were not suddenly surprised by the eruption of Vesuvius. The outbreak had been announced for days, and many Pompeians had left the city together with their families and possessions. After all, the city was not yet rebuilt after the earthquake of 62 AD. Atypical findings, such as living rooms used as storage rooms, semi-finished reconstructed buildings or ruins, bear witness to this condition.

At yovisto academic video search, Diana E. E. Kleiner explores the civic, commercial, and religious buildings of Pompeii as part of her lecture on ‘Roman Architecture’. She is an art historian known worldwide for her expertise on the art and architecture of the ancient Romans." 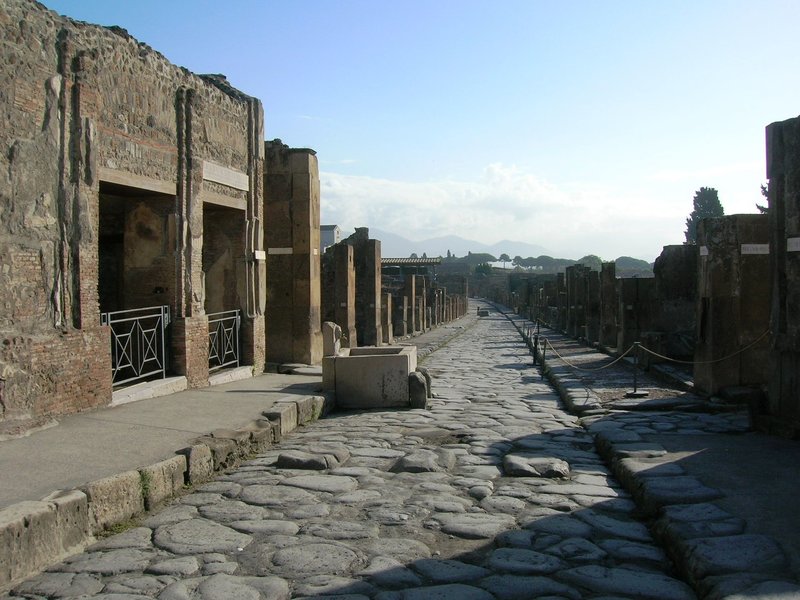 Posted from scihi.org
Posted in these groups:

1SG (Join to see)
Posted >1 y ago
If you ever get a chance, I highly recommend a visit. Another treasure that fewer people know about is on the other side of Naples, the sunken city of Baia. If you go, I recommend staying in Sorrento. It is a much nicer town than Naples, close to the Amalfi Coast and Capri, and you don't have to brave the crazily crowded Circum Vesovio Train.
Naples itself is kind of a dump.
(1)
Comment
(0)
1
1
0