Thursday, January 11, 2018 - Motivational Quotes of the Day! - Victory for Veterans

Today is: "Be the Sunshine Day!" Why Not?

Quote in the Picture Today: "When you can't find the Sunshine, be the sunshine!"

Sometimes you just need to be reminded that the simplest things can lift your day. If you think a rainy day means a bad day, then it’s time to inject some sunshine into your own being.

"Just living is not enough... one must have sunshine, freedom, and a little flower." ― Hans Christian Andersen

"Keep your face to the sunshine and you cannot see a shadow." ― Helen Keller

"Wherever you go, no matter what the weather, always bring your own sunshine." ― Anthony J. D'Angelo 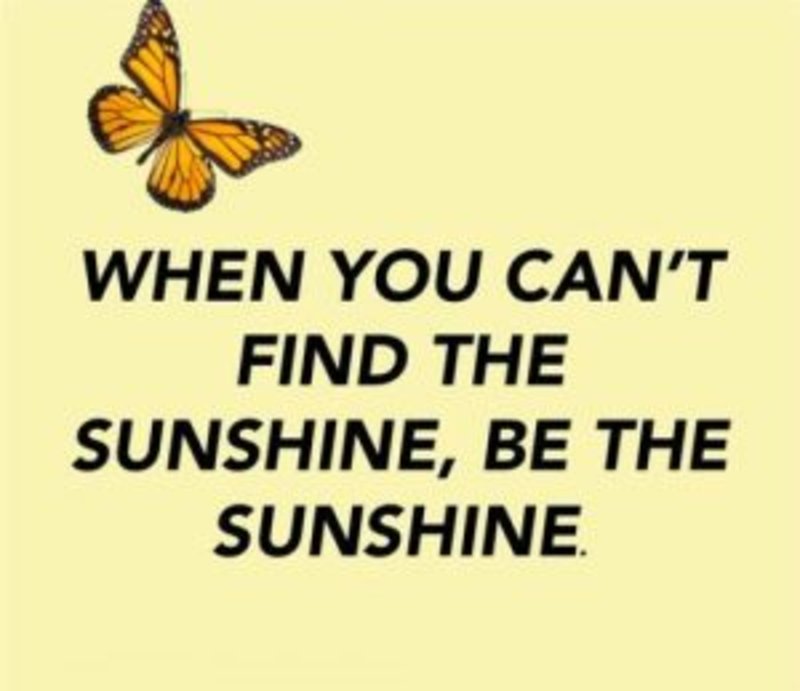 Thursday, January 11, 2018 - Motivational Quotes of the Day! - Victory for Veterans

Posted from victoryforveterans.org
Posted in these groups:

What Would You Do

Sue Lyon came into Donovan's life at the end of 1965. This was two or three years before he met his "Jennifer Juniper" (Jenny Boyd). Lyon had starred in "Lol...

I was sitting in a stark TRICARE clinic waiting area in Fairfax, VA yesterday morning while my darling wife had her vitals checked. Across from me was an image of a wintertime image of a deciduous forest with sun shining at a low angle creating streams of orange and yellow on the tree trunks.
I was reminded of dismounted infantry patrols of the decades past when after a long and cold and sometimes wet night - the morning sunshine broke through and warmed my tired and cold bones. Basking in the warmth of the sun after a dark and cold night is refreshing and a wonderful metaphor as well COL Mikel J. Burroughs

As Helen Keller reminds us even the blind can feel the warmth of the sun and the blind can sense emotions in ways the seeing can not.

The smile of a young child brings warmth to the hearts of parents and even casual observers. When we are childlike our smiles are genuine and appreciated and frequently contagious.

Rains refresh the earth and they frequently are blessing for farmer and gardener and appreciated on hot days while not appreciated as much on cold winter days - yesterday there was a period of a cold winter rain at Fort Belvoir while I was there with my darling wife.

Your post focusing on sunshine reminded me to the hopeful 1960s tune Sunshine superman by Donovan. Here is background on the woman depicted in the video.
"Sue Lyon came into Donovan's life at the end of 1965. This was two or three years before he met his "Jennifer Juniper" (Jenny Boyd). Lyon had starred in "Lolita" and "Night of the Iguana" before meeting Donovan. The couple dated until 1967 when Sue ended the relationship abruptly. Donovan had evidently slipped LSD in Sue's and her friend's drinking cup at a party. Sue described her trip as "frightening and disturbing" and she "felt her self-control disintegrating". After this incident Lyon never spoke to Donovan again until 1975. The two are now good friends and Sue attended Ione Skye's (Donovan's daughter) marriage to King Ad-Rock (with the Beastie Boys)"
https://www.youtube.com/watch?v=hTuPbJLqFKI

The Son of God warms my soul and HE encourages me and leads me through green pastures and besides gently flowing streams after a night of travail.

Psalm 23 New American Standard Bible (NASB)
Psalm of David.
The Lord is my shepherd, I shall not want.
He makes me lie down in green pastures;He leads me beside quiet waters.
He restores my soul;
He guides me in the paths of righteousness for His name’s sake.
Even though I walk through the valley of the shadow of death,
I fear no evil, for You are with me;
Your rod and Your staff, they comfort me.
You prepare a table before me in the presence of my enemies;
You have anointed my head with oil;
My cup overflows.
Surely goodness and lovingkindness will follow me all the days of my life, and I will dwell in the house of the Lord forever."

Yes the light of The LORD can shine through us to others to bless them.